In this answer I calculated the approximate angular separation between Mercury and the Sun as seen by the SOHO satellite using Skyfield's method of .ecliptic_position() because I couldn't get true ICRF coordinates for SOHO from the Horizons web interface.

Is there a way I can get ICRF coordinates for SOHO that haven't been rotated into the ecliptic?

xy-plane: plane of the Earth's orbit at the reference epoch

x-axis : out along ascending node of instantaneous plane of the Earth's orbit and the Earth's mean equator at the reference epoch

z-axis : perpendicular to the xy-plane in the directional (+ or -) sense of Earth's north pole at the reference epoch.

You can see that x,y are indeed a circle, but z is just +/- a tiny fraction of an au - basically the vertical component of the halo orbit. That's confirmed by the 6-month periodicity.

So how can I get true ICRF coordinates instead of these coordinates flattened to the particular plane the earth moves in at epoch? 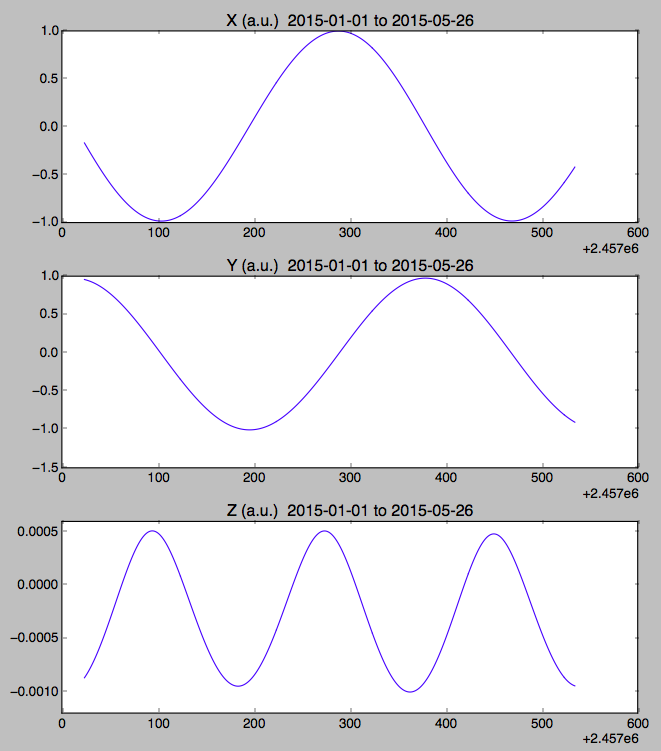 Change the "Table Settings". You want to select

Not the answer you're looking for? Browse other questions tagged orbital-mechanics artificial-satellite skyfield python soho or ask your own question.

6
What is this white dot and strange line in SOHO image?
2
JPL ephermeris table
1
Will these equations give me the approximate apparent RA and Dec using positions from Horizons?

14
Is this what station keeping maneuvers look like, or just glitches in data? (SOHO via Horizons)
3
Juno's original orbit around Jupiter - is this apsidal precession? If so, need expression
1
Find keplarian orbital elements between orbits
1
Understanding Longitude of ascending node (orbit orientation)
4
Finding x,y,z, vx,vy,vz from Hyperbolic orbital elements
4
Calculate Argument of periapsis of orbit given focus and two points on ellipse