When I only apply tangential velocity such that vp.x=0, things match up exactly. 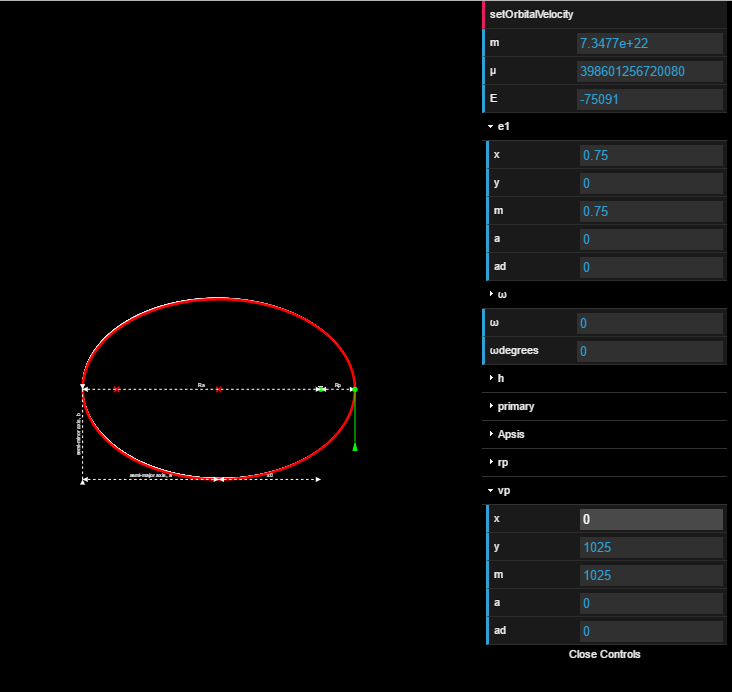 However, when I add some radial velocity, such that vp.x>0, I have a bit of an issue. It rotates correctly with the "Argument of Periapsis" and maintains the same shape but I need to shift the ellipse to match what I should be getting in white. 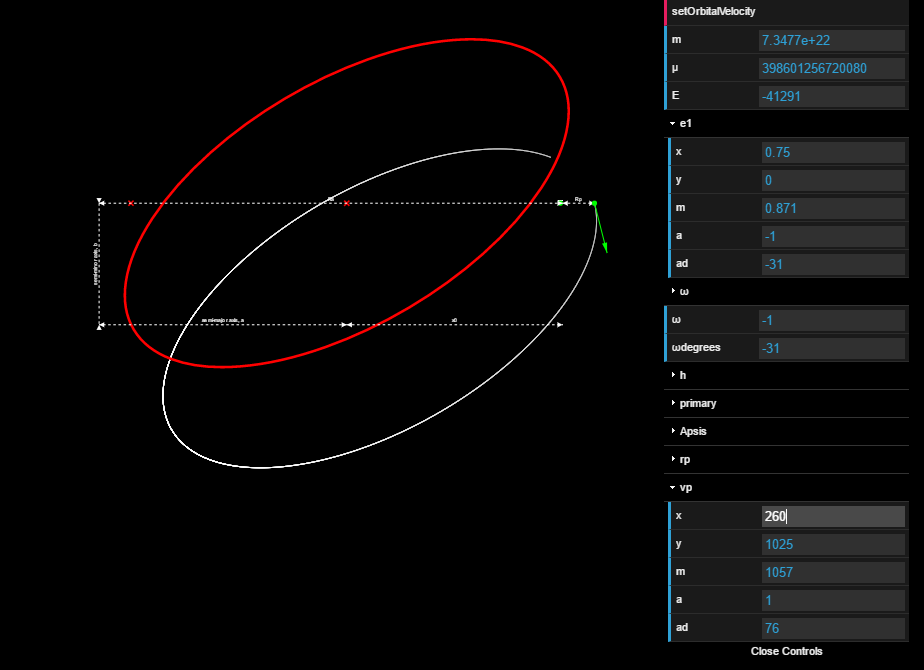 Can anyone advise how to calculate the x and y shift required so the red ellipse matches the white?

I am making use of the code shown in the following question and answer to calculate orbital parameters so I can plot the orbital ellipse (in red).

How to calculate the time to apoapsis & periapsis, given the orbital elements?

Actually quite a simple fix. The "Argument of Periapsis" rotates the ellipse around the primary (sun). As the sun is at one focus of the ellipse all you need is a little trigonometry to calculate the shift for the center of the ellipse. 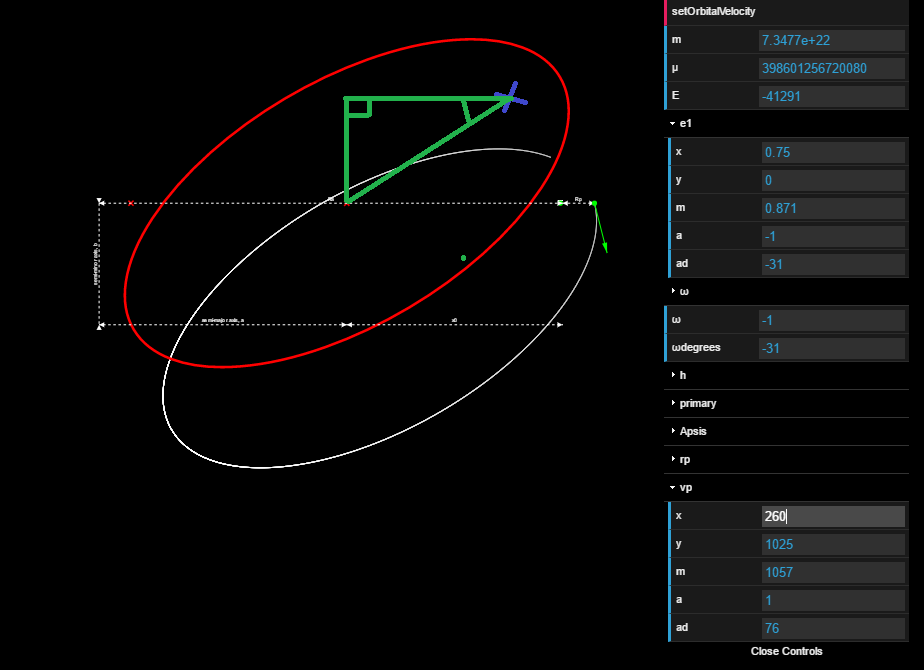 I had actually tried this before but was incorrectly thinking it was rotating around the orbiting body so instead of using x0 I was using a.

As you can see in the below image it is still not perfect. I seem to have a bit too much energy when calculating the semi-major axis for the ellipse in red. 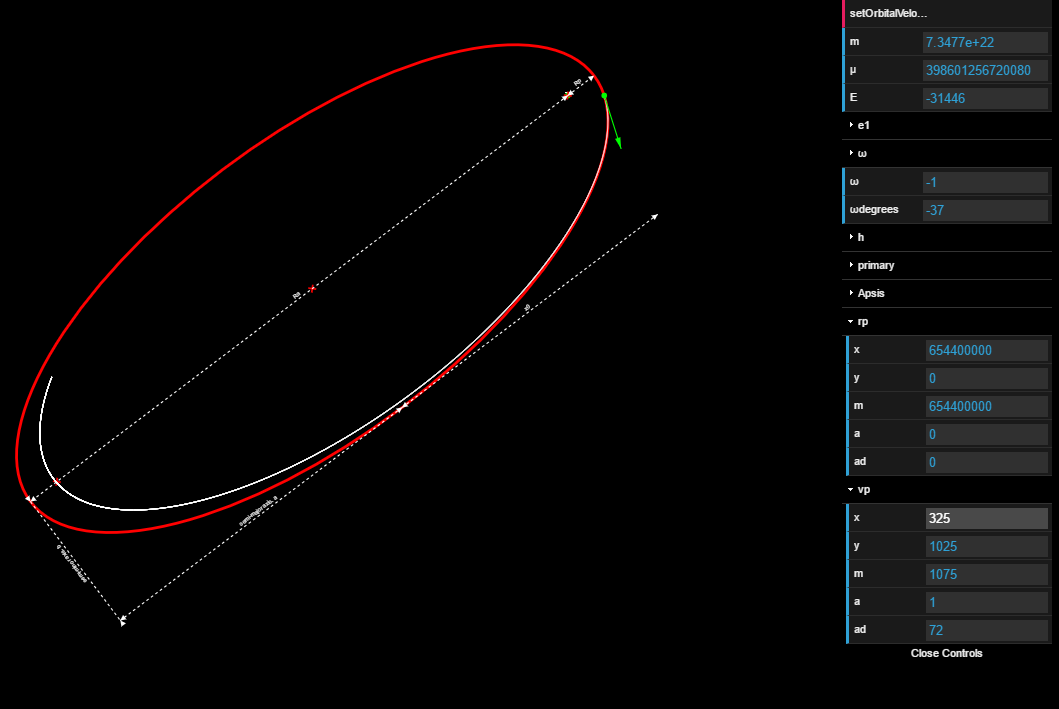 I have found this spreadsheet that also does the calc.

Hopefully a few more people will up vote your question and answer and send you on your way to more rep! 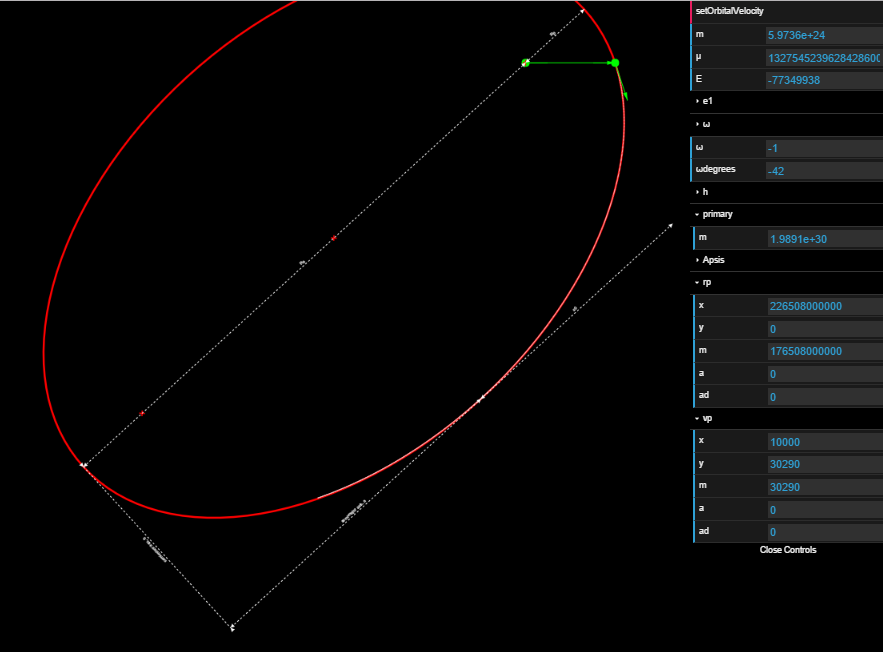 Not the answer you're looking for? Browse other questions tagged orbital-mechanics orbit orbital-elements mathematics or ask your own question.

5
Keplerian Orbital Elements ↔ Cartesian ECEI with WGS84 Corrections
9
How to calculate the time to apoapsis & periapsis, given the orbital elements?
14
Converting Orbital Elements to Cartesian State Vectors
4
Deriving the changes in Keplerian Elements induced by small impulses
5
Calculating velocity state vector with orbital elements in 2D
1
TA of the intersection of 2 orbits with different AoP
4
Where can I find examples of orbital state vectors?
2
Orbital vocabulary confusion! How can the tangential velocity of an elliptical Kepler orbit not be tangent to the orbit?
5
How can I calculate the future position of a satellite orbiting a central body as a function of time using known orbital elements?