Why not a landing platform with solar cells on the Mars 2020 rover for the helicopter scout? 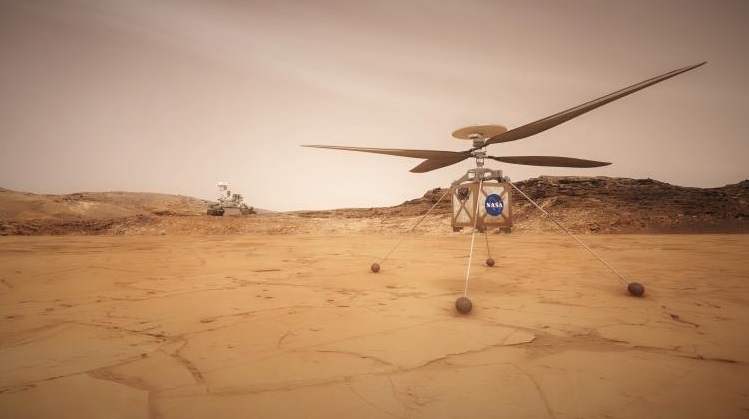 It's a solar powered helicopter drone with a mass of 1.8 kg and a coaxial rotor diameter of 1.2 m.

In this recent publication about the design and development of the helicopter:

The helicopter is powered by a Li-Ion battery system that is recharged daily by a solar panel. The energy in the battery is used for operating heaters to survive the cold Martian nights as well as operate the helicopter actuators and avionics during short flights lasting from 90 seconds to a few minutes. Depending on the latitude of operations and the Martian season, recharging of this battery through the solar panel could occur over one to multiple sols (Martian days).

The on board solar panel has a 544 cm$^2$ active cell area and is centered above the co-axial rotors.

It is estimated that with an available battery capacity of about 36 Wh, night-time survival energy usage will be 21 Wh and approximately 10 Wh is available for flight.

Could not the duration and the frequency of the daily flights of the helicopter be enhanced considerably by recharging the battery with solar cells on a telescopic landing platform placed on the rear end of the Mars 2020 rover ?

With a platform of 2 x 2 meters, a landing would not be that difficult for a helicopter with a coaxial rotor diameter of 1.2 meters, even with a simple demonstration model like this one.

With a surface area of 40,000 cm$^2$ for instance, recharging the helicopter's battery could be easily done more than 4 times a day on this platform, while at night the scout could remain on the platform to be kept warm with the rover's onboard energy.
So in contrast with a stand alone helicopter, with the platform the scout can use all the available battery capacity for flight and at once.

Furthermore several flights in different directions could be done within one day, speeding up the exploring capacity considerably.

And it will be advantageous to have much more energy for the rover and its instruments as well.

Mars Helicopter Scout is "just" a demonstration mission to show that it is possible to operate an airborne vehicle on Mars. It has very limited capabilities, such as the total weight of only 1.8 kg.

I think that it's very likely that a future extended helicopter mission to Mars will use a scheme like you proposed, but this small-scale demonstration mission is just too early.

Not the answer you're looking for? Browse other questions tagged mars rovers solar-power perseverance helicopter or ask your own question.

1
Why isn't NASA having a ground-based solar panel to charge the Li-ion batteries on board the JPL Mars Helicopter?
4
Could Ingenuity stay warmer at night by landing on (or near) Perseverance's RTG?

1
Will the Mars helicopter be able to remove the dust from solar panels?
12
Why make Ingenuity survive some "brutally cold Martian nights" before its first attempt at flight?
3
Which is currently further from their landing site: Ingenuity or Perseverance? How far away are they from each now?
4
Thermal batteries rather than battery-powered heaters for small craft on Mars; how much mass would it add, how much would it replace?
2
Do reversible proton-exchange membrane hydrolizer/fuel cells exist? Have they been incorporated into a “Hydrogen Battery”?