Where are the Apollo forward heat shields currently located?

The Apollo Experience Report: Thermal Protection Subsystem explains that there are three sections to the Apollo heat shield: 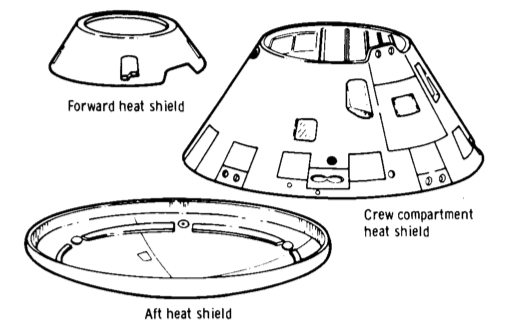 All three heat shields were made of a fiberglass honeycomb filled with epoxy.

The forward heat shield was automatically ejected at 24,000 feet by a baroswitch (with manual backup switches). It had its own parachute, landed separately from the CM, and had its own recovery helicopter. The other two heat shields remained attached to the CM. The drogue, pilot, and main parachutes were completely separate from the heat shield chute, and began their deployment sequence two seconds after 24,000 feet.

Where are the forward heat shields today? Are they with their respective command modules? Were some lost to the ocean? In some government warehouse next to the Ark of the Covenant? I can only account for Apollo 15's, which was extensively examined as a possible cause of the failure of one main parachute on that flight.

Here is what I have found:

Apollo 4- Managed by the Smithsonian, is not on display there. May be on loan, can't figure out where.

Apollo 17- On display at the Kansas Cosmosphere

Apollo 15- Was recovered for sure, as y you mentioned.

It seems like not as much effort was put forward to recovering these. Apollo 4 was probably recovered because it was the first mission flown. The others seem to have been missions of opportunity.

Except for the Apollo 15 and 17 articles, it appears the Forward Heat Shields are resting at the bottom of the ocean. Somewhere.

At 24,000 feet (7.3 km) the forward heat shield was jettisoned using four pressurized-gas compression springs. The drogue parachutes were then deployed, slowing the spacecraft to 125 miles per hour (201 kilometres per hour).

The Forward Heat Shields were the first thing ejected, before any parachutes. It's safe to say they weren't recovered unless there is specific information otherwise. A brief discussion post indicates that the 15 and 17 articles were recovered, but I've not seen anything discussing such for the other vehicles.

Not the answer you're looking for? Browse other questions tagged apollo-program heat-shield or ask your own question.

18
Which parts of a spacecraft are joined by adhesives?

21
Where were the various Apollo Lunar Modules (LMs) discarded?
9
Where is the first Lunar soil sample currently located?
8
What are the major challenges faced in designing a reusable heat shield?
25
Why was the Friendship 7 Mercury heat shield detachable?
6
How would the Apollo telescope have worked in the Apollo command module? Where would it be located and how would it be operated?
27
Why aren't RCS openings an issue for spacecraft heat shields?
27
Are heat shields just as necessary on launch as re-entry?
3
Mercury reentry heat shields; material composition, manufacturing process and explanation of all those concentric ridges?