Can mineralogy maps be made without dedicated instruments? MAGIC at Callisto

While we are still waiting for the official Discovery finalists announcement, and it's perhaps a bit premature to be discussing the proposals, I've been thinking about the exciting MAGIC mission to orbit Callisto, for which it has been suggested a very limited payload, consisting of a Magnetometer, an Altimeter, a set of Cameras, and of course the spacecraft's comm system. 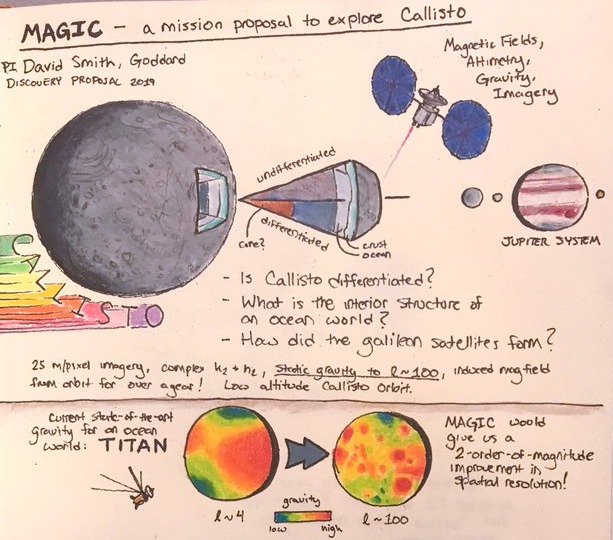 I was wondering whether if, in addition to this mission's objectives related to internal structure and topography, such a limited set of instruments could tell us anything about the chemical composition of the surface, perhaps inferring it from roughness and radiance maps.

The principal investigator, David E Smith, has been heavily involved over the last few decades on previous missions that have carried Laser Altimeters, such as Messenger, MGS, and LRO, but all of them were also equipped with many other instruments, for instance 5 spectrometers in the case of MESSENGER, designed with that task in mind.

So, can some sort of mineralogy map of Callisto be produced with MAGIC's only 3 instruments?

As a side note, could we also learn anything about Callisto's thin atmosphere only by radio occultations?

The scientific instruments on board will not be able to detect minerals on Callisto.

Cameras will record physical features of the surfaces, such as: craters, geological faults, folds and color variations. The color variations will indicate change in mineralogy, but nothing else.

The magnetometer will measure variations in magnetic field. However it will not be able to differentiate between minerals on Callisto. Not all metals are magnetic. Iron, cobalt and nickel are strongly magnetic, whereas tungsten, platinum, aluminum and magnesium are weakly magnetic and gold, copper and silver are not magnetic.

To ascertain what minerals are on the surface, a spectroscope will be needed.

Not the answer you're looking for? Browse other questions tagged planetary-science jupiter geology instrument remote-sensing or ask your own question.

12
Do we have instruments that can measure the depth of storms like the Great Red Spot on Jupiter and the Great Dark Spot on Neptune?
4
How are martian dust devil maps made?