Why are there mountains/mounds in the centre of craters on the lunar surface?

From clear images of moon's surface we can see many of the craters have small mountains/mounds (or montes) in the centre. So, what is the mechanism behind the formation of these mountains and which types of impacts create such craters?

Oh, I can answer this one. In my structural geology class, we breezed over a few paragraphs on the tectonics of impact craters, but it was in the textbook, and, being space-related, I was intrigued.

One note: while most of the papers you'll find are on our own geology, the moon isn't that different compositionally from Earth at all, so I'm assuming the same principles are the same. One thing to note: the lunar regolith is texturally very different from any terrestrial soil. Lunar regolith forms in two ways: from the shattering of rock during impacts, and from the mid-flight radiative freezing of droplets of rock molten during particularly high-energy impacts. These methods produce, respectively, very jagged grains (which are never weathered smooth) and perfectly round ones. So the soil might have either a much higher angle of repose or much lower (than earths). I'm not quite sure.

As I resold my textbook, my source will be the Kenkmann et al. (2014) paper, "Structural geology of impact craters".

To summarize: there are three stages of impact kinematics. The first is impact & compression. The instantaneous transfer of kinetic energy from the impactor to the rock causes shockwaves to propagate through the rock. The compression of the rock is irreversible but the decompression is not, making this an asymmetric shockwave which accelerates the rock as it passes through it. This residual velocity imparted into the rock causes the second stage, excavation. Simply, the shockwave made the rock move, so it keeps moving, and either flies out of the crater or is displaced downward without exiting the impact zone. Here's a figure from the paper: 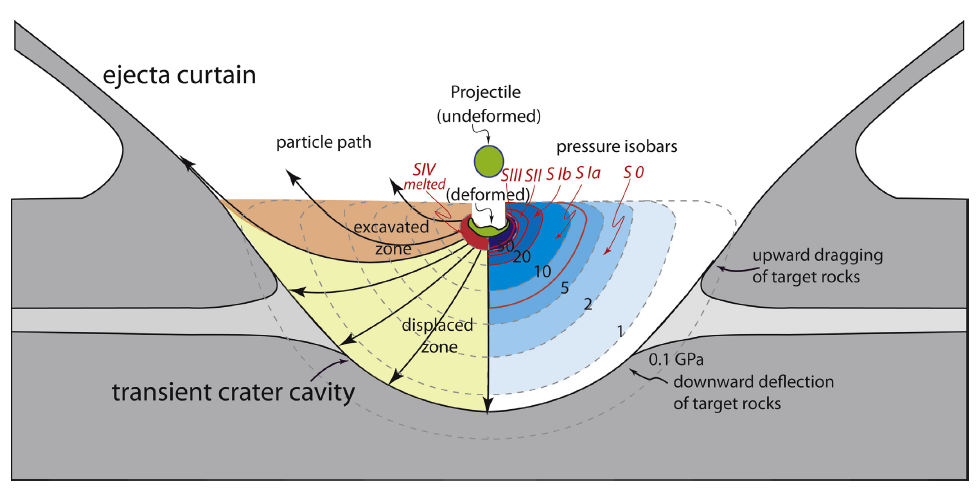 The final stage is the modification stage. This is when the excavation ends and gravity starts to take over the rocks again. This is where your central peaks form. Here's another figure from the paper, comparing two craters (one is on Mars, the other is on the Moon, but that's not relevant to our discussion): 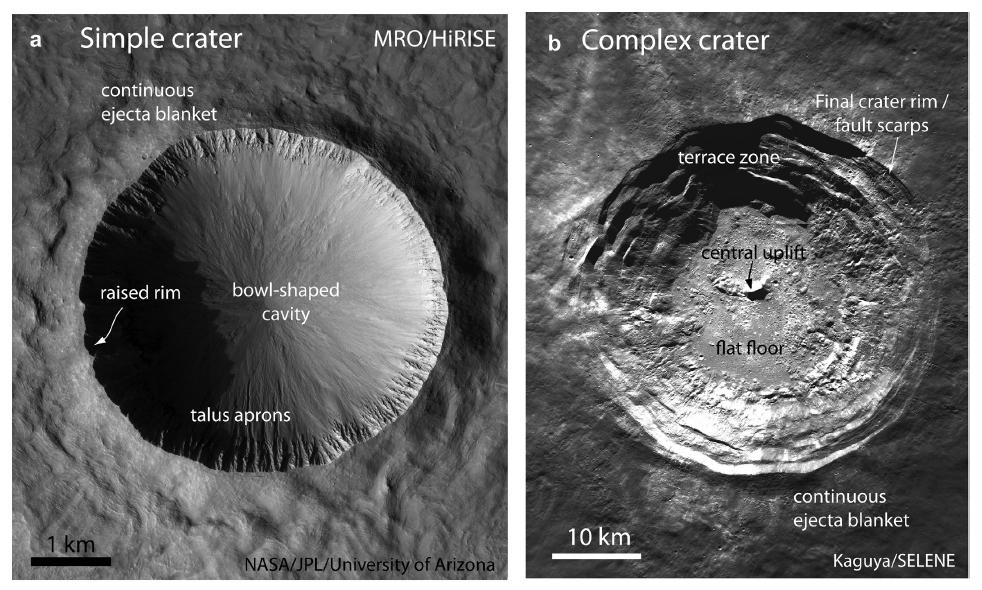 Note the scale bars. The smaller crater is basically unchanged from what you'd expect after the excavation stage, but the larger one has collapsed on itself. A scarp is a structure caused by rotational mass wasting events (when stuff falls down, but not in a straight line). Here's a diagram. 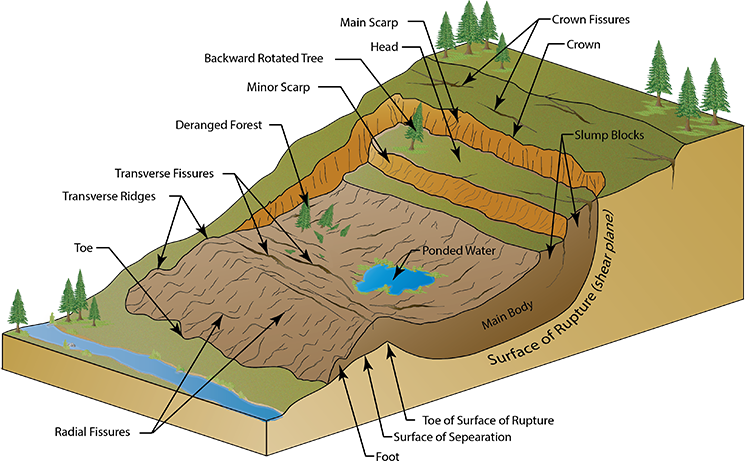 Our observation that larger craters are more modified is supported by the text:

The transient cavity is negatively buoyant and creates an upward force on the crust due to the displaced mass in the crater. This gravitational force attempting to close the crater is counteracted by the strength of the target. If the buoyancy force is too small, strength prohibits the target material from moving upwards and inwards to modify the cavity and a simple crater is formed (Collins et al., 2004; Kenkmann et al., 2012). If the size of the transient cavity exceeds a certain threshold, buoyancy forces exceed the target’s strength and the entire cavity can completely or partly collapse. This starts at the deepest point of the cavity in the very center, where the upward-directed buoyancy force is strongest and a complex crater is formed (Fig. 13). The relative balance between both mechanisms, the buoyancy acting to close the crater, and material strength acting to stabilize the cavity, determines whether a simple or complex crater is formed.

If you didn't understand that, it means that the rock that was pushed down by the shockwave is coming back up. There's still another mechanism at play here. Where the crater has become too steep to support the weight of the walls, the interior will start to collapse:

The collapse occurs first at the deepest point of the transient cavity. The cavity floor starts to rise upward and inward, causing a rotational flow field underneath the cavity. The greatest total uplift and uplift rate exist in the center, pushing the cavity floor upward (Fig. 13).

For the curious, here's figure 13:

To make a bit more sense of it, let's go back to that scarp diagram (the one with the trees). See the part labeled "foot"? This is the mass which was displaced by the collapse, and ended up in a pile at the bottom. It's in kind of a peak here, because even though everything is moving down in general, when gravity is moving rocks (and not tectonics), they tend to break in curves. As a result, the stuff coming out the bottom goes up a bit, and then stabilizes again. In a circular basin such as a crater, where everything is collapsing at once, all that stuff in the middle being pushed up can make a small little mountain.

In general, the larger a crater is, the more mass will be displaced, and the more it will collapse afterwards. If the new mountain in the middle is too big, it'll collapse again, possibly multiple times, creating a peak-ring crater. 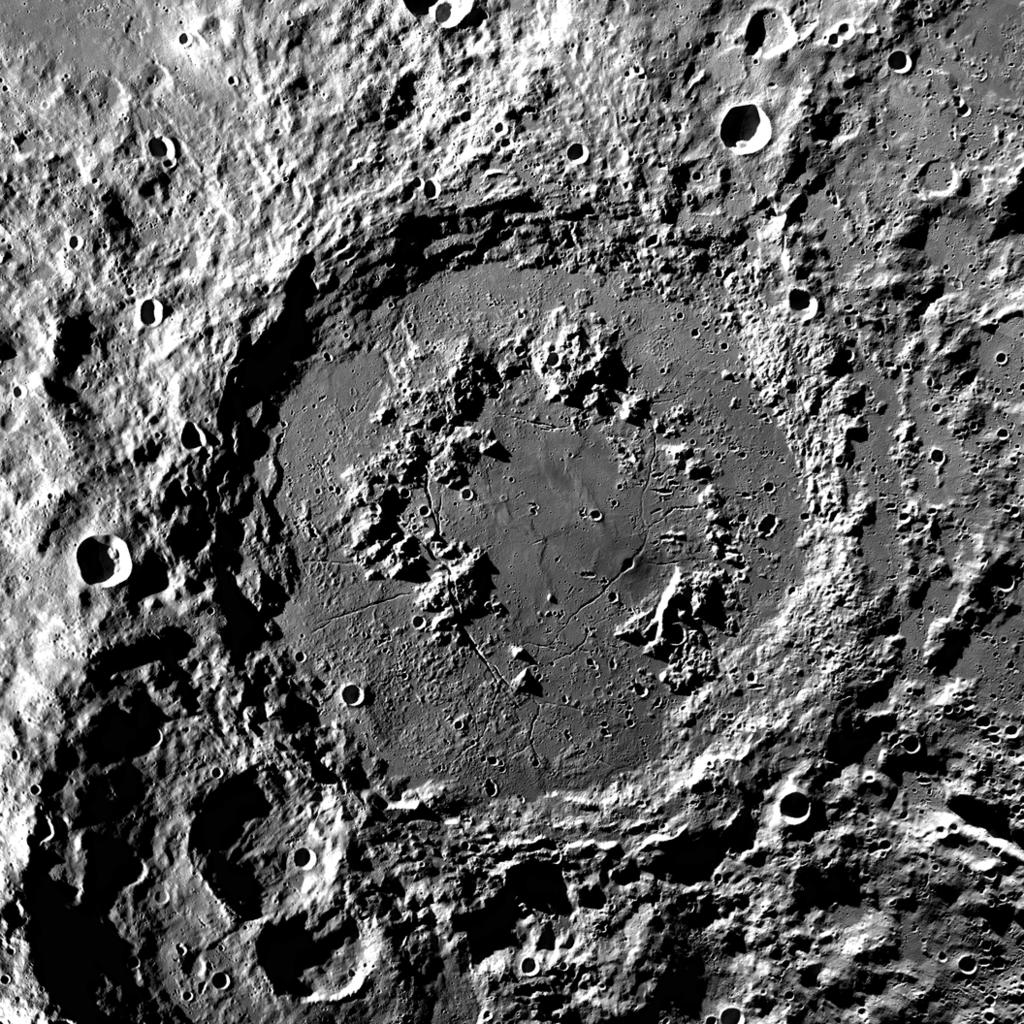 Schrödinger Crater, a peak-ring crater on the moon.

It's actually a rebound effect that occurs with an impact forming a large crater. https://www.lpi.usra.edu/education/explore/shaping_the_planets/impact-cratering/ explains:

Central peaks – Peaks formed in the central area of the floor of a large crater. For larger craters (typically a few tens of kilometers in diameter) the excavated crater becomes so great that it collapses on itself. Collapse of the material back into the crater pushes up the mound that forms the central peak. At the same time, the rock beneath the crater rebounds, or bounces back up to add to the peak.

On the Moon, this effect is seen in craters larger than 26 km (16miles) diameter.

It might help to compare the crater formation to a drop impact: 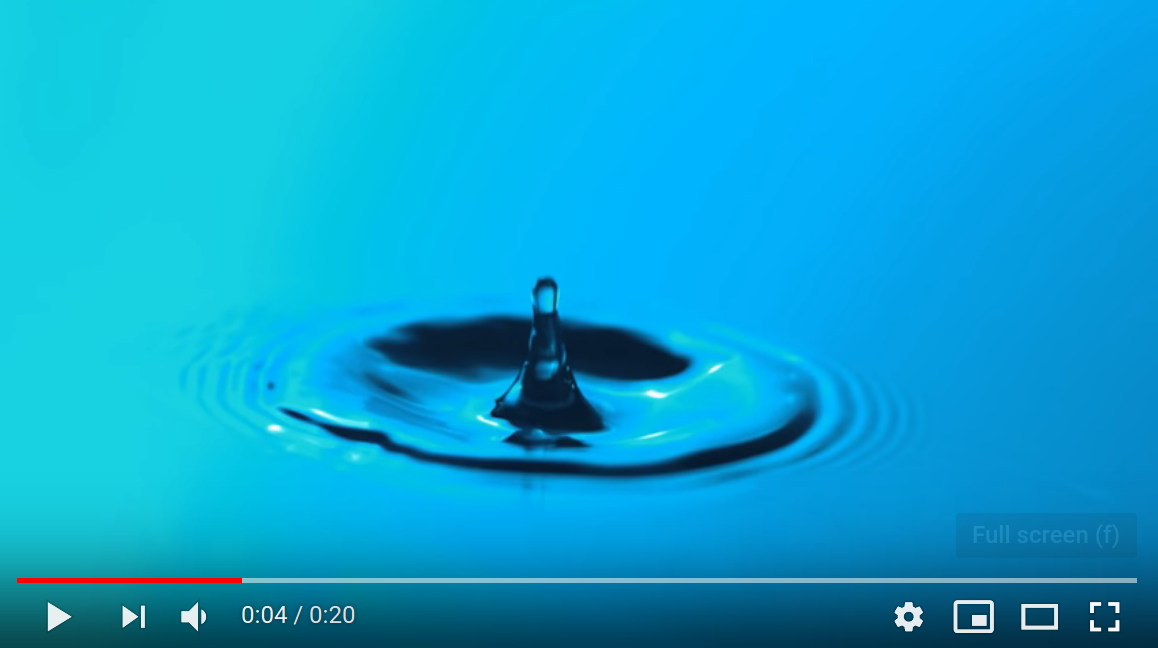 It seems that rock can behave like a viscous mass if you hit it fast enough.

Not the answer you're looking for? Browse other questions tagged the-moon impact geology crater or ask your own question.

11
Any explanation for morphology of within crater formations on the northern Nili Patera caldera of the Syrtis Major volcanic plain of Mars?
11
Features on border of a crater & ravine on Mars
8
Is long range radio communication possible on the lunar surface?
16
The Moon's shadow could not possibly look like this — could it?
3
Shape and dimensions of the Moon's reference surface for selenographic latitude/longitude?
10
Is there really a frozen lake near the equator on Mars?
14
Were stereoscopic pictures taken during the Apollo missions?
6
What will happen to gas released from the Moon's Surface?