this answer to Is it possible for a spacecraft to communicate with Earth when a planet is in the way? suggesting that atmospheric refraction could be used to get at least some kind of signal around a pesky planet that gets into your line-of-sight communications link got me remembering @TomSpilker's comment under my answer to When did planetary scientists realize Venus' surface pressure was almost 100x that on Earth? How did they find out? which includes:

before waxing nostalgic about graduate school and radio astronomy dishes.

I believe that the comment refers to Figure 22 of Fjeldbo, Kliore, and Eshleman (1971) The Neutral Atmosphere of Venus as Studied with the Mariner V Radio Occultation Experiments shown below.

Normally we think of the index of refraction of at least a dry, neutral atmosphere as scaling roughly with density, and so should decrease with height, reaching 1 + 0j in a vacuum.

The high polarizability of water molecules means that the humidity profile of the atmosphere has a big correction for radio and much of the infrared (in terms of angular deflection due to refraction) based on the real part of the index of refraction.

Absorption due to the imaginary part attenuates, but to first order at least doesn't deflect in the plane wave approximation. (Spatially variable attenuation can lead to diffraction but that's a horse of a different color).

I'm puzzled why Fjeldbo, Kliore, and Eshleman chose to plot Figure 22 with an index of refraction that increases with altitude away from the planet. So I'd like to ask:

Question: Why did Fjeldbo, Kliore, and Eshleman 1971 choose to plot Figure 22 with an index of refraction that increases with altitude away from Venus' surface? Is there some physics or insight here, or was it just a convenient abstraction? 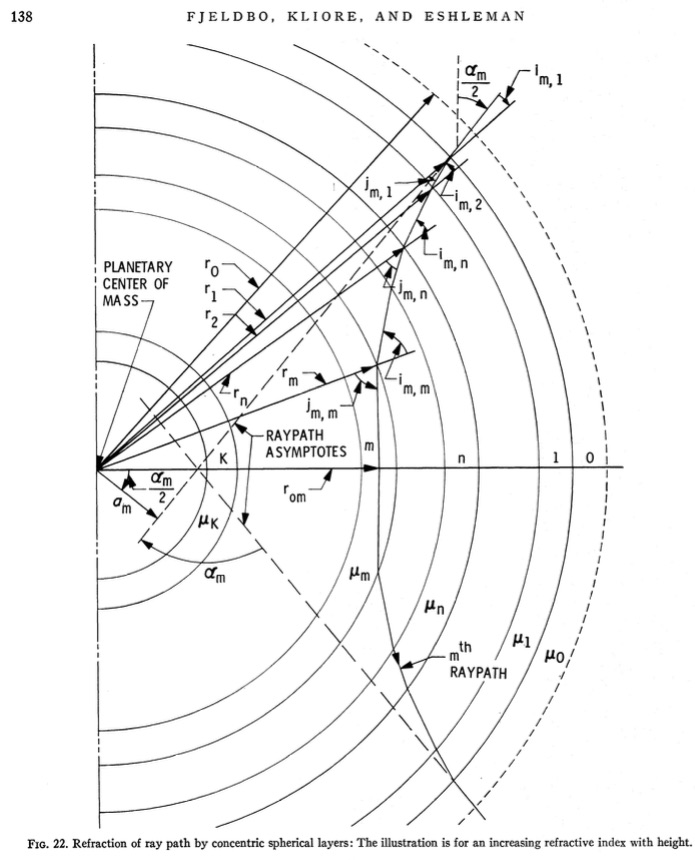 Fig. 22. Refraction of ray path by concentric spherical layers: The illustration is for an increasing refractive index with height.

I thought I'd share some of my thoughts after reading the paper (I still need to read some sections in full detail), onto which hopefully someone actually knowledgeable in the field can comment.

This was indeed quite puzzling, and after digging into it for a while, I realized Figure 20 is in fact also shocking at first (at least for me!). Fig. 20 legend states:

Fig. 20. Occultation geometry: The illustrated ray path is bent in the ionosphere where the refractive index is less than 1.

(emphasis added by me).

I was surprised to see this, since from my limited understanding, I thought refractive indexes should always be higher than 1. However, it seems this is indeed possible in the ionosphere due to it being in plasma state, as indicated by section Mechanism of refraction here. This results in rays being refracted away from the normal, as opposed to what I have usually seen in refraction diagrams. This is also the same path displayed in Fig. 22, which was also surprising to me at first, since I thought the atmosphere should refract rays "towards the planet" (this being one of the reasons that we can still see the Sun during a sunset after it has actually set, I believe).

So it seems that type of path would be caused by the ionosphere. From Wikipedia, there is indeed a well-known ionosphere in the atmosphere of Venus. It seems the more ionized a region of the ionosphere is, the smaller (i.e, closer to 0) the refractive index becomes. So I guess, at some point in the ionosphere we reach a maximum of ionization, and from there to larger heights (i.e., farther from the planet), ionization would decrease until reaching no ionization in vacuum.

This would lead to an increasingly large refraction index with height, for regions where the main factor contributing to refraction is the ionization of that layer of the atmosphere.

26
When did planetary scientists realize Venus' surface pressure was almost 100x that on Earth? How did they find out?
4
Is it possible for a spacecraft to communicate with Earth when a planet is in the way?

10
Why do radar maps of the surface of Venus have missing slices?
4
What is the typical size of the sulfuric acid droplets in the atmosphere of Venus?
26
When did planetary scientists realize Venus' surface pressure was almost 100x that on Earth? How did they find out?
6
How was the radius of Venus measured so accurately (± 3 km) via radar in the mid 1960's, before Venera 4 and Mariner 5?
2
Just how huge is Mars' cloud of hydrogen?
4
What is the atmospheric composition of Venus at the 34 mile (50 km) altitude of the proposed HAVOC program?
3
Would the >100 km "knee" in Earth's atmosphere still be where MFP exceeded scale height if it were pure Ne or Ar?
0
How many planets have had their limbs scanned with radio signals?
5
How did the Venera Probes manage to safely descend to the surface of Venus?