If a high-temperature melt of lunar soil cooled slowly, what layers might appear?

Suppose mare regolith is heated to 2400 K, then left to cool slowly in a tank. Samples of powder regolith from the mare are about half glasses and half crystals of composition as shown below. Would some pure minerals separate into their own layer? Might one hope to find layers of pure metal oxides before the mix started to crystallize at 1700 K according to Bowen's reaction series 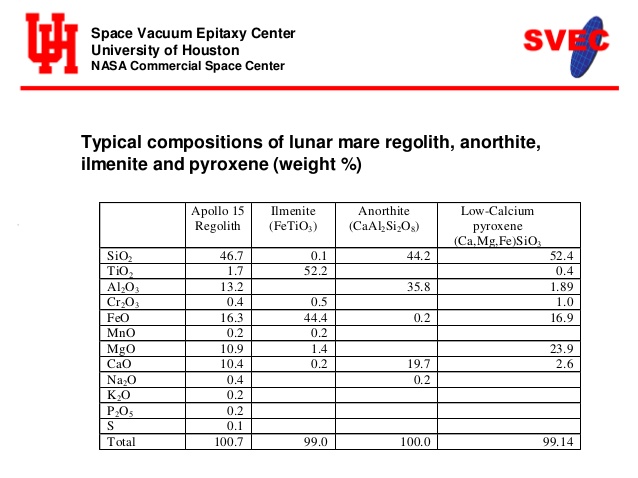 If they wouldn't separate as they cooled, what would they do? Is the low gravity an issue?

I've been working on very rough ideas for solar furnaces on the Moon, to model a virtual colony, and I'm trying to work out its general format and applications. Suggestions for reading at an introductory level are also welcome.

2400 K is above the melting point of all the constituent minerals, and all the metal oxides except MgO and CaO, while being below the temperature at which some of the oxygen would separate (at about 2700 K). It's my best guess at the appropriate temperature to try this. Bowen's reaction series begins at about 1700 K, so until the mix cools to that temperature, it shouldn't crystallize (other than tiny crystals of MgO and CaO floating around).

The concentration of metals with the regolith will be critical a factor to the amount of effort, energy required and regolith required.

The other important factors will be what other metals will be in the regolith and how this may influence the formation and degree of alloyed metals.

Also what metal do you want to concentrate by melting regolith?

Getting the metal you want from its particular layer with a melt will be a problem. One of the problems will be the thickness, or thinness of the layer, and its proximity to layers of other metals or alloys and the need to get the metals from layers without contamination.

Not the answer you're looking for? Browse other questions tagged the-moon planetary-science mining geology or ask your own question.