Do smaller rockets require better weather at launch than larger ones?

The Spaceflight Now article Rocket Lab test launch halted by ship traffic, deteriorating weather mentions that the recent planned launch of the Electron rocket was cancelled due to a combination of factors, including weather.

Are there any significant differences between launch vehicles in terms of "launchability" in less than ideal weather? Would the Electron, or even smaller sounding rockets require better weather (for example lower wind speed or gradients) than larger rockets? Or vice versa?

Here is one data point. I'm hoping for a better answer by the way, but this is the best I can do:

The SciNews YouTube video Terrier-Black Brant IX sounding rocket launches DXL mission shows a small-ish sounding rocket which put the DXL spacecraft on a sub-orbital trajectory that reached 160 miles or nearly 260 km. Since it doesn't snow very often at Cape Canaveral, I can't say one way or the other if the "big rockets" launched there can also launch in snow, but although I have seen many photos of Russian launches with snow on the ground, I haven't seen any (yet) while it was snowing! Happy to be proven wrong though!

A NASA Terrier-Black Brant IX suborbital sounding rocket launched the Diffuse X-rays from the Local galaxy, or DXL, mission from the Poker Flat Research Range (PFRR) in Alaska, on 19 January 2018. The DXL investigation aims to study the sources of X-rays that hurtle towards Earth from elsewhere in the Milky Way galaxy. 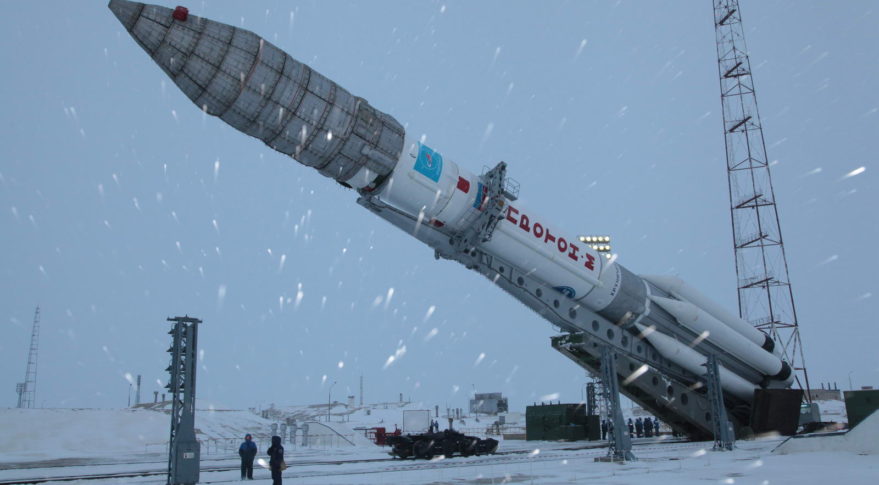 To some extent, smaller rockets require better weather conditions in order to launch. Though, it depends on the instrumentation on the rocket more than the size.

When Apollo 12 launched during a thunderstorm, the Saturn V was hit with several lightning bolts. The Saturn V was built with the ability to launch in virtually every weather condition except the end of the world. It was not necessarily the size of the rocket that mattered, but the resilience. Being a manned rocket, there were basically backups for backups, making the Saturn V extremely resilient to outside forces.

A wind shear is a rocket's worst nightmare. The rocket engineers know the limitations of the rocket and may give a GO for a launch, then during launch, the winds violently change, knocking the rocket off-course.

The capability of the SAS is based on the purpose of the rocket. For instance, the Falcon 9 is meant to go to LEO (low earth orbit.) Conditions for low earth orbit reset almost every ninety minutes, giving SpaceX a more flexible launch window. The Saturn V was committing to a moonshot. In order for the Saturn V to launch, NASA had to take the moon phases and the moon's orbit into account. The moon's orbit (a day) and the moon's phase cycle (twenty-seven days) overlapped provide little opportunities to land on the moon, requiring a less flexible launch window. In order for NASA to deal with the constricted launch window, they had to make a rocket that can deal with any instances of harsh weather. Hence, they packed the Saturn V full of instrumentation.

P.S. You can cross-check moon-phase cycles with Apollo launches using this moon phase checker and a list of Apollo launches. You'll find that most launches took place either close to the full moon or first quarter or smack dab in the middle of a full moon.

Not the answer you're looking for? Browse other questions tagged launch weather or ask your own question.

9
What benefits can be gained from launching below ground?
3
How many good days per year Cape Canaveral has?
3
Effects of atmospheric conditions on rocket performance?
1
Will the countries ever co-operate again for the next upcoming era of Martian exploration?

18
Methods for propulsion other than rockets for leaving Earth's atmosphere?
32
What are the droplets/particles falling off rockets at launch?
5
How good does the weather have to be for a rocket launch?
10
Do geosynchronous satellite launches require a tight launch window?
16
Was SpaceX's launch of Formosat-5 more vertical than normal for any particular reason?
13
Are there microclimates with better weather conditions on Mars?
31
Do rockets leave launch pad at full thrust?
1
Do you know a rocket for launching femto and pico satellites smaller than the SS-520?
6
Has space weather ever impacted spacecraft launch schedules?