I was reading about Martian greenhouses earlier today and I saw this image: 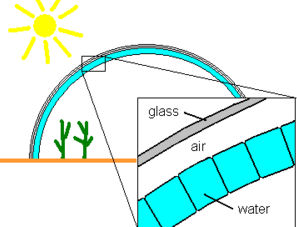 Would this be feasible? Would the water need to be cooled/heated up to prevent things like water condensation from forming on the glass?

Managing the temperature and humidity throughout the greenhouse would certainly be an issue. The outside air is extremely thin, and so a poor conductor of heat, so the glass would tend to be only a bit colder than the air within it. I imagine you would keep the water sealed, so the air just outside it could probably be kept quite dry, even if you wanted the interior of the greenhouse to be humid. You would probably also want to keep that layer at significantly reduced pressure, so that the pressure difference helped support the water and for both reasons you would want the layer of water tanks to actually be airtight.

The image may be from the Marspedia article for Greenhouse, so I've included some of the text below.

The question asks "Would this be feasible?" and so it is important to consider what "this" is. In this proposed design the water serves as a radiation shield and a thermal buffer, and the glass serves as "insulation" and as an atmospheric pressure barrier.

This means that the water may be fairly uniform in temperature, as well as fairly constant. However, the glass will probably have a significant gradient in temperature, especially at night.

Since most kinds of glass are mostly opaque in much of the thermal infrared (and therefore have high emissivity, as described in @Puffin's comment), the outer surface will always be efficiently radiating heat to space (see @JohnRennie's excellent explanation), and since it is transparent to visible, it will not be warmed very much by the predominantly visible wavelengths of sunlight, and only by the very thin martian atmosphere if it warms up. That means that the outside surface of the glass may always be colder than the martian surface. At the same time, the inside surface will be warmed by both the air, and by thermal infrared from the interior - by the water actually.

So the job of supporting a large temperature difference between inside ambient and the coldness of space falls to the glass. This will require glass that has a low thermal conductivity. Not all glasses do (some can be used for cooking!)

so in order for this to work, some careful selection of glass composition will be required.

Would this be feasible? Would the water need to be cooled/heated up to prevent things like water condensation from forming on the glass?

Is it feasible? I don't see why not in principle. However a real engineering study would be necessary to estimate how much glass is needed. I think a double or triple-pane window would be better than a single thick sheet of glass, and minimization of heat transfer around the edges of the glass by using a polymer instead of steel for window frames will be helpful as well.

As far as condensation is concerned, that would be a big problem. Of course the air touching the glass could be kept at the same pressure and roughly the same temperature as ambient but kept drier, or as I mentioned, a double or triple pane window could be used.

Much of the engineering would take its cues from home windows used in very cold climates, or windows for commercial jet aircraft, where outside temperatures are quite cold and pressures are low, and humidity inside, though usually fairly low, can have high excursions. 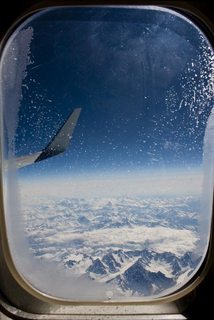 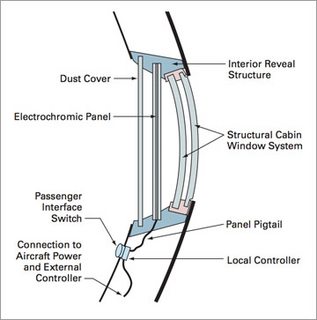 above: Images from this answer in Aviation Stack Exchange. Click for larger.

above: An example of a few types of glass from Newport. "Thermal IR" is roughy 5 to 30 microns,but it depends a lot on temperature.

Hydrogen does a good job absorbing cosmic radiation. Water contains highly concentrated hydrogen, and hence serves as a good radiation shield. On the other hand it is highly transparent for visible light and UV. The combination of both makes it an interesting material for greenhouse shielding.

Under a strong pressure resistent housing the water is placed in a thick layer. It absorbes the dangerous parts of cosmic radiation and sunlight and passes most of the spectral parts needed by humans and plants. Additionally, it helps to buffer daily temperature variations because of its high specific heat capacity.

The layering could be as follows: The outer layer is a construction of steel and glass, providing enough strength for the difference in atmospheric pressure. It also serves as insulation for temperature differences. Additional sheets of glass or plastics improve the insulation effect. A self-healing puncture protection should be considered. The innermost layer is the water. It can be held by transparent canisters.

8
What are these very large, square panels on Inmarsat 5?
1
Martian Watershield Greenhouse

16
Feasibility: self-sustaining colony on Mars vs. Space Station
6
How would a manned Mars mission keep from contaminating Mars?
6
How much land does a colony on Mars need to start off?
5
Which is easier to build on mars per square kilometer; greenhouse windows or photovoltaics/LEDs?
4
Sunroofs on Mars - durable transparent structural plastics lighter than glass to ship from Earth?
4
What downsides are there to a low pressure dome over a Mars base?
5
Transparent radiation shielding for martian surface bases
7
If we got to Mars right now and landed at the poles (where there is a lot of water ice) how long would we be able to stay there?
12
Are there any possible methods for keeping surface water on mars?