Are there any examples of a reduced-gravity sporting event or match being played in space?

I created the reduced-gravity-sports tag because I see it as both technically/scientifically interesting, and likely to be really big in the future.

So now I'd like to ask: *Are there any examples of a reduced-gravity sporting event or match being played in space?*

Something that would be played differently due to the different acceleration experienced in space.

[Al] Shepard brought along a six iron golf club head which he could attach to the handle of a lunar excavation tool, and two golf balls, and took several one-handed swings (due to the limited flexibility of the EVA suit). He exuberantly exclaimed that the second ball went "miles and miles and miles" in the low lunar gravity, but later estimated the distance as 200 to 400 yards (180 to 370 m). [Edgar] Mitchell then threw a lunar scoop handle as if it were a javelin.

Sunita Williams ran the Boston Marathon in the ISS.

Tim Peake ran the London Marathon in the ISS. 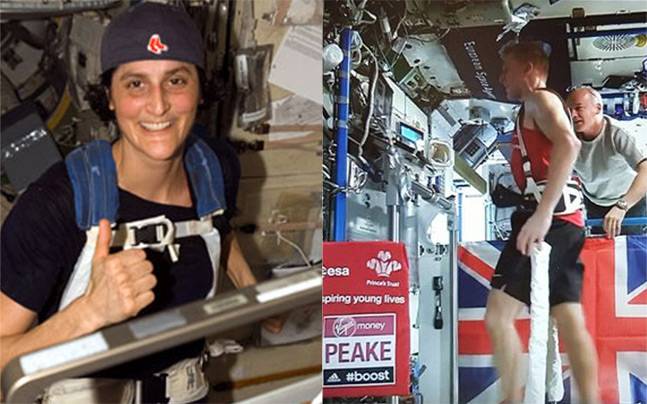 update: Finally, it's on the NASA Johnson YouTube channel! Tennis in Space:

Commander Drew Feustel commented on the match saying, “Our match in space was pretty challenging due to the fact that we are in a microgravity environment. We did have a net, but the rules allowed the ball to go over or under the net. Also, there was no requirement for us to stay on the ground, so to speak, so we had the freedom to play on the walls, ceiling, or floor. The game space was a bit cramped so we could not really smack the ball without making it unplayable for our opponents. Also, we did not observe a service or base line or any lines for that matter. We just did not have them. We made a lot of modifications, including to the racquets.”

There was a recent and heavily hyped "tennis match in space" as part of a staged event to hype the beginning of the US Open tennis tournament. To make it even weirder, it was projected on the Unisphere in Flushing Meadows, NY, which is incidentally Homer Simpsons's favorite place to go in the greater NY metropolitan area (GIF and Video thereof).

See also Space.com's Tennis in Space, Anyone? Astronauts Have a Ball During Historic Match and also Astronauts Will Play the First-Ever Tennis Match in Space Tonight! Watch It Live

Here is a screenshot showing Feustel hitting a tennis ball on the ISS being bizarrely projected on the Unisphere: https://i.stack.imgur.com/7IEhI.jpg

Here is another video showing Feustel in an earlier interview, and playing tennis in space!

Starting at 24:24 he explains some of the physics of trying to play tennis in space in a very thoughtful and informative way. The discussion is too long for me to transcribe right now, I may make an attempt later if I have more time.

As a thought experiment a few years ago I came up with a sport for low earth orbit and I'm trying to find where I wrote down the rules and can't. So I'll do my best to recall.

The name of the game was spaceball. Which is ironic because the game doesn't use a ball.

There are two teams in an arena that is approximately 18 feet in diameter and can be any length.

One player from each team is essentially the "ball" and each team has to get their ball in the opposing team's hoop.

The hoops are at both ends of the compartment in the center.

Not the answer you're looking for? Browse other questions tagged iss reduced-gravity-sports or ask your own question.

14
a "speedy" lunar rover?
5
What is the gravity inside a rotating cylinder?
7
Any scholarly or serious work in Sports Science for the low surface gravity of Mars or the Moon?

61
Washing clothes in space: are there any technical challenges?
12
Are there any humanoid robots on board the ISS?
65
Is there no physical security in space, other than being in space?
44
Are there any weapons in space?
7
Any scholarly or serious work in Sports Science for the low surface gravity of Mars or the Moon?
2
Are there any plans to reach the ISS by new means?
18
Is there any money in space?
11
Were any mammals born in space (or are there any confirmed planned missions to breed them)?
34
What led NASA et al. to decide the ISS should be a zero-g station when the massive negative health and quality of life impacts of zero-g were known?