Gimbal Check: Before or After Engine Ignition?

Is the engine gimbal check done before or after ignition?

Also curious: How many seconds does the check take? What does it consist of? Do they gimbal each engine separately, or do they gimbal all engines simultaneously?

No worries if you don't have references handy. If the answer depends on the type of rocket, feel free to answer for the ones you know. Thank you!

It is unlikely that gimbal checks would be done on a running engine (at least in flight) due to the resultant effects on the vehicle.

In addition to the famous prelaunch gimbal test of the main engines prior to launch as described here, gimbal checks were also done on the Orbital Maneuvering Engines (OMEs) and the Solid Rocket Boosters (SRBs) thrust vector control systems.

On some missions, a prelaunch gimbal check was performed on the OMS at T-7 hours 30 minutes. The criteria were as follows

OMS GIMBAL PROFILE IS ONLY REQUIRED ONE TIME PRIOR TO LAUNCH MAKING THE REPEAT OF THE TEST OPTIONAL FOR A RECYCLE LAUNCH COUNTDOWN. DO NOT PERFORM THIS TEST IF IT HAS BEEN PERFORMED IN THE PREVIOUS COUNTDOWN UNLESS THERE IS CONCERN OVER ACTIVITY IN THE GENERAL LRU AREA OR CONCERN OVER POSSIBLE TREND DATA OR CONCERN OVER THE TIME ELAPSED SINCE THE LAST TEST.

(Apologies for all caps, that is how it is written in the OMI S0007 Shuttle Countdown)

In flight, a gimbal check was performed by executing an ITEM 34 on the Maneuver display. 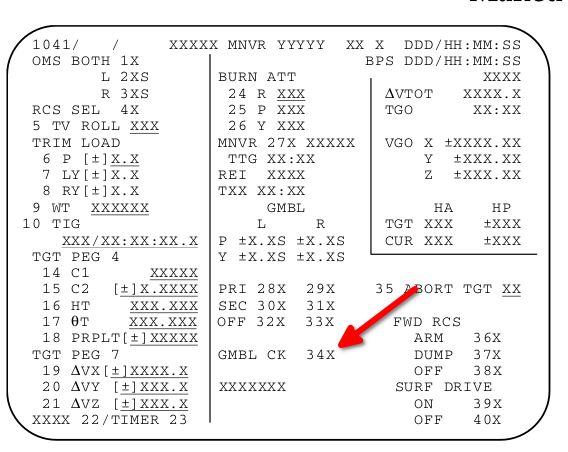 If problems were suspected with the thrust vector control system, gimbal checks could be done as required.

The shuttle Solid Rocket Boosters thrust vector control system was a hydraulic system pressurized by two hydrazine-powered Hydraulic Power Units (HPU) in each booster. The HPUs were started at T-26 seconds and the gimbal test was started at T-21 seconds and nominally completed by T-16 seconds.

15
Why did the SSMEs gimbal during ignition?

13
What are the challenges in Falcon 9 “full thrust” (v1.2) with densified propellant?
5
Falcon 9 engine ignition sequence
10
If it is difficult for Merlin engine to have deeper throttling, could it be as an option a different engine at the center of the rocket?
5
What would be the implications of high-altitude or catapult launch for orbital rocket?
2
What is the highest gimbal range ever used on an engine?
5
How is gimbal angle calculated?
15
Why did the SSMEs gimbal during ignition?
9
Falcon 9 TVC: Which engines participate in roll control?
2
Dragon Launch Escape: Attitude Control?