Space elevators may be a reality only in the future, but I know we have the basic principles down pat. Something has been bugging me, though. If we had the proper materials, we could build such an elevator high into the sky. But is there a limit to how high? This leads me to consider a special case:

Take two doubly-tidally locked bodies (i.e. they are always facing the same way relative to each other - as if half of the Earth was always facing the Moon). For simplicity, say they are more like Pluto and Charon: they are essentially the same shape, size, and composition, and have approximately the same mass. Would it ever be possible to build a space elevator (now more like a space bridge) from one to the other? Could it be built in a similar fashion to the normal hypothesized space elevators?

One scheme for building elevators is to start from an anchor mass in synchronous orbit and to extend tethers down and up. The tether above will pull the anchor mass up and the tether below would pull the mass down. Care is taken to balance the two and keep building until the tether reaches the planet's surface.

The Pluto-Charon L1 is a point where 3 accelerations cancel out: Pluto's gravity, so-called centrifugal acceleration, and Charon's gravity. As the tether extends both directions it would be a balancing act to keep one side from overpowering the other. Some station keeping would be needed to keep the elevator balanced as the tethers move out from L1. 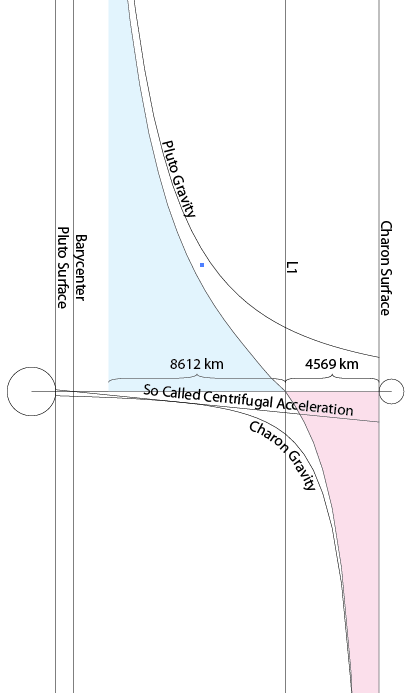 The tether reaches Charon after unfurling 4569 km from L1, To balance this, an 8612 km length is needed on the Pluto side of L1.

Can the balancing act be maintained while the tether is being unfurled ~8600 km on one side and ~4600 km on the other? I believe it can. Once the elevator is anchored to Charon, the pull of Pluto's tug can exceed the other accelerations. In fact this is a good idea to maintain tension.

An elliptical orbit would cause the elevator length to vary. According to a 2012 Tholen and Buie paper Charon's orbit is circular. In 1997 Tholen and Buie had estimated the eccentricity to be .003 to .008. In 2002 Stern Bottke and Levison expressed skepticism for that result noting that tidal evolution of the Pluto-Charon would drive eccentricity to values negligibly close to zero. Tholen and Buie's 2012 paper are from longer and more careful observations.

An orbit inclined to the Pluto's or Charon's equators would also cause stretching and flexing. Again this system has orbital elements favoring an elevator. i = .001º

2nd Edit: Put in cites to support my claim that Charon's orbit is very nearly circular. Also explained the needed balancing act while tethers are extended from L1. This balancing act isn't the show stopper some think it is.

In theory, yes, one could build a bridge.

There are several potential problems.

The first problem is that no known natural orbit is circular; all of them are ellipses. If, for example, the semi-major axis of the co-orbital elipse is 11000km, and the semi-minor axis is 10000 km, you need 1000km of "flex" in your bridge.

Since the stable orbital balance point is harder to establish, one cannot "hang" the bridge. If one cannot hang the bridge, then one must push up the bridge. Compressive strength is a major flaw; at present, all known materials require hanging the elevator from orbit, rather than building it up, and even then, only carbon nanotube is viable for Earth orbit.

Given the issue of putting the thing into orbit, the geosynchronous point will be the L1. "stable" L1 orbits are not points, but complex wobbles around the L1 point, due to N-body solution issues. This instability of the L1 makes the initial station unable to be actually all that geosynchronus.

Further still, even tho tidally locked, all know tidally locked bodies "wobble" - the lock isn't absolute, and their orbits are also inclined versus the equator. This means that you have to allow for the non-match - the anchor point must move, or the system must flex from the L1.

This makes, for this author, the bridge to be unlikely, at least barring some form of orbital alterations to eliminate the inclination and eccentricity.

It should also be pointed out that L1 Lagrange points are exceedingly useful for a variety of testing and manufacturing purposes due to pico-gravity. Any elevator constructed will likely have a station at this location anyway, with two ribbons tethered to the location instead of just one passing through. And the ribbons don't need to be simply tied, that can easily be on a spool that can shorten and length the ribbon as needed with the tidally locked bodies.

In short, even with shortening and lengthening distances, its' very feasible, however it won't be a static structure, but an active one.

Not the answer you're looking for? Browse other questions tagged space-elevator tidal-locking or ask your own question.