How are cryogenic rocket propellants delivered to the launch pad?

I work at a university that gets LN2/LHe (liquid nitrogen and helium) delivered a couple times a week by a large tanker truck outside my office. It seems to work well enough to deliver a couple tons of cryogens per week, but a rocket (e.g. Falcon 9 or Delta 4 Heavy) could use 200-600 tons of cryogens. How are they delivered to the pad?

Is it just a fleet of trucks? Are they manufactured nearby (LOx, liquid oxygen, seems easy enough to produce given lots and lots of electricity) and piped to a holding tank?

Kennedy Space centre in Florida formerly had its own plant for the manufacture of cryogenic fuels and other liquids. This is now closed as noted earlier. The procurement for cryogenic fuel for NASA is done via the office of procurement at KSC. It was determined that the US has only one supplier cryogenics that can supply the cape with the necessary 30 trucks per day necessary to fuel a launch, and that is Praxair. They supply both oxygen and hydrogen to KSC.

Other NASA sites are also supplied by Praxair, and other contractors.

Vandenberg has an on site cryogenic plant operated by Air Liquide of America, but it is not clear what volume they supply for launches there - its probably classified.

Baikonur also has an onsite cryogenic plant, mainly because it is hundreds of miles from anywhere! There is also a plant at Plesetsk, and one will be built at Vostochny. Most of the Russian Cryogenic plants are now owned and operated by the Cryogenmash company.

There is an extensive railway system at Baikonur and the fuels are moved from the storage tanks to the launch pad by rail cars. Here are some photos from Baikonur to illustrate that: 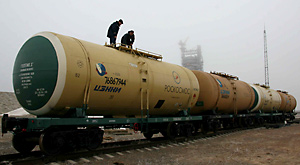 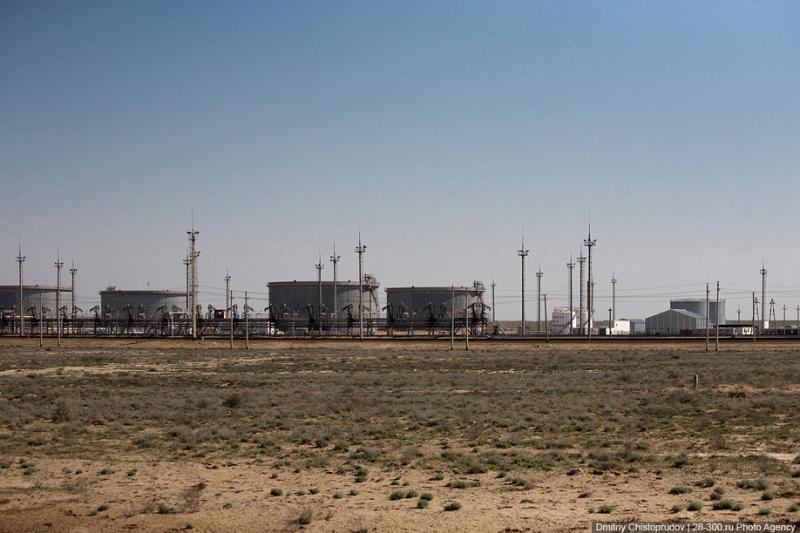 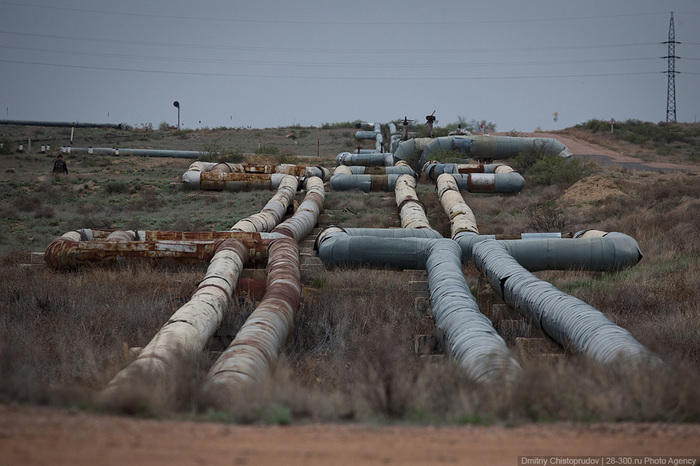 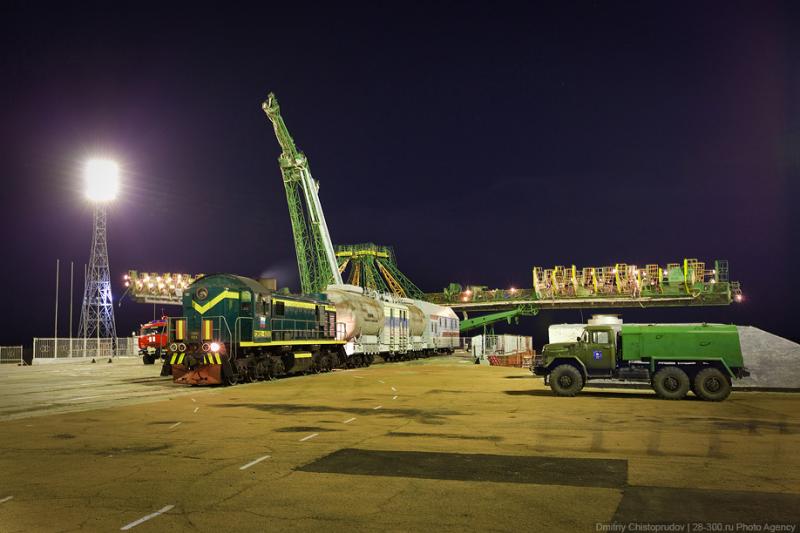 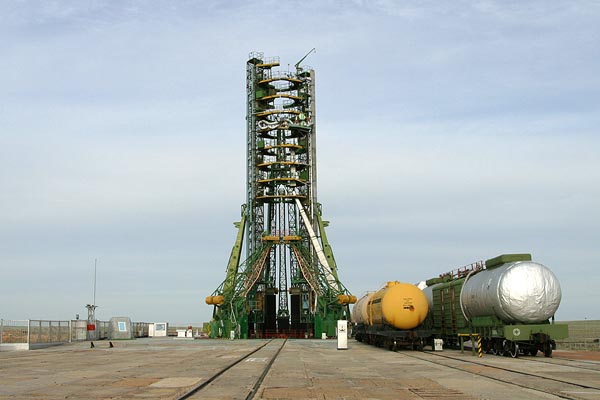 At Kourou, there's a production plant for liquid hydrogen and oxygen. The plant is run by Air Liquide, a French company that specializes in industrial gases.
There's also a casting facility for solid rocket stages.

Depends on the fuel.

With Liquid Oxygen, for regular launches, it makes more sense to build a LOX plant nearby and pipe it to the pad/storage tank, than it is to buy it offsite. You can see the SpaceX oxygen ball near the pad at LC-40. It seems that during the Saturn project they had such a plant at the Cape near LC-17 but no longer.

Nitrogen in large quantities is the same.

The others are usually trucked in or brought by rail car. Kerosene/RP1 is most likely brought by train or truck for SpaceX.

Consider how much Kersone, LOX, and LH2 the Saturn V launches took? Many times that of a Falcon 9 launch.

An interesting side question is how SpaceX gets LOX at the McGregor test site where they test single Merlin engines almost daily, and often run tests on full up Falcon 9 first stages.

Not the answer you're looking for? Browse other questions tagged fuel safety cryogenics logistics storage or ask your own question.

1
How do rocket launch sites get liquid oxygen?
4
How were hypergolic propellants delivered to the Shuttle launch pad?
3
How are cryogenic fuels and oxidizers generated and procured?

16
How does the launch risk posed by plutonium compare to the launch risk posed by propellants?
14
How long is it feasible to store cryogenic fuels?
18
How are fuel tanks filled with cryogenic hydrogen?
17
How feasible is it to use aluminum and liquid oxygen as future propellant sourced from the moon?
10
How did the Space Shuttle keep its cryogenic fuel cold?
6
Why can’t cryogenic propellants be storable, at least on the ground, via refrigeration?
1
Could in situ (in-rocket) evaporative cooling/refrigeration be used for methane or hydrogen cryogenic propellants?
4
How were hypergolic propellants delivered to the Shuttle launch pad?
2
In a rocket engine, do the propellants come out as liquid or gas if they’re cryogenic?