Was LC39A built with a rocket much larger than the Saturn V in mind?

The interesting question What are the most difficult challenges SpaceX will face getting astronauts to Mars by about 2025? links to Elon Musk's position paper Making Humans a Multi-Planetary Species which can be found (in both HTML and PDF formats) at:

Figure 9 gives you a more direct comparison. The thrust level is enormous. We are talking about a lift-off thrust of 13,000 tons, so it will be quite tectonic when it takes off. However, it does fit on Pad 39A, which NASA has been kind enough to allow us to use because they oversized the pad in doing Saturn V. As a result, we can use a much larger vehicle on that same launchpad. In the future, we expect to add additional launch locations, probably adding one on the south coast of Texas, but this gives you a sense of the relative capability. However, these vehicles have very different purposes. This is really intended to carry huge numbers of people, ultimately millions of tons of cargo to Mars. Therefore, you really need something quite large in order to do that. (emphasis added)

It's an interesting read, and a good way to start to understand the issues involved and how SpaceX amy approach them. However one item caught my eye. Stating that the proposed ITS rocket design (now downsized to the Mars vehicle version of the BFR (Big Falcon Rocket)) would fit on — and presumably be launch-able from — NASA's Launchpad 39A, it mentions in passing that NASA "oversized the pad in doing Saturn V", and that as a result SpaceX will be able to "use a much larger vehicle on that same launch pad."

According to the linked article and Figure 9 (shown below), SpaceX believes, and presumably NASA agrees that 39A (of course with suitable modifications to some systems) should be able to handle a rocket with about 3.5 times the weight and 3.6 times the thrust of the Saturn V. 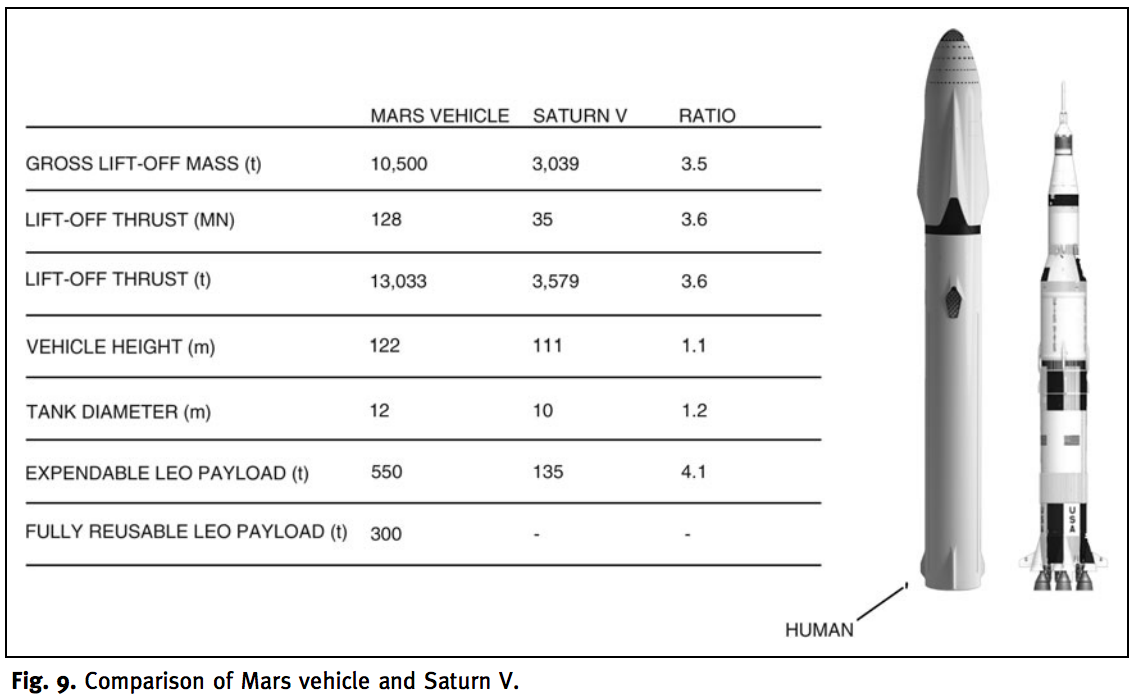 Launch Pads 39A and 39B were initially built for either the Saturn C-8 or the Nova rockets, each of which has a lift off thrust of about 7000 tons, about twice that of the Saturn V. These were alternative designs to allow for a return directly from the Moon to Earth, but ultimately scrapped in favor of the Saturn V Lunar Rendezvous design.

Note also that the Space Shuttle actually has a higher thrust on lift off, namely about 6000 tons, then the Saturn V.

I suspect that when the pad was designed, it was designed to support 7000 tons of thrust at liftoff, with a fair bit of margin. I'm not sure that the design can fully support the BFR, but it should be close.

Not the answer you're looking for? Browse other questions tagged nasa history saturn-v launchpad or ask your own question.

6
Why a 900,000 gallons LOX storage tank at Launch Complex 39?
8
Where will SpaceX build and launch the BFR?
6
What are the most difficult challenges SpaceX will face getting astronauts to Mars by about 2025?
6
Were launchpads at KSC built with pilings or footings?

5
When was the second production run of the Saturn V cancelled?
10
What was the maximum thrust of the Rocketdyne F-1 engine?
32
Why was this Saturn rocket elevated for launch?
13
Will the January 2018 government shutdown affect the Falcon Heavy launch?
6
Were launchpads at KSC built with pilings or footings?
5
Why would the Shuttle-Transtage have been unusable for science missions?
3
Was the Saturn V ever stacked anywhere other than KSC?
3
What was the first satellite built with mostly COTS electronics?