How does a landing spacecraft control main parachute inflation?

In a recent post from SpaceX about Crew Dragon parachute test you can see how the main parachutes are deployed in semi-folded state, after a while they inflate a bit and after another while they finally fully extend.

Images of the sequence steps captured from the linked video:

How is this sequence timed and driven? Is it just aerodynamic forces, are there any control strings or is it something different?

Concerning the part of the question, "How is this sequence timed and driven? Is it just aerodynamic forces, are there any control strings or is it something different?" there are passive methods and active methods.

Passive methods include that mentioned by @BobJacobsen, line drag, which slows the inflation by the time it takes to pull a line through a conduit in the canopy. Another is an "energy modulator", such as a rip-stitch tape shown in this JPL presentation on parachute deployment for the LDSD (Low-Density Supersonic Decelerator) tests, and this COSPAR presentation (abstract only) about reducing opening shock for scientific balloon flight termination.

Active methods often involve pyrotechnic line cutters, activated by an electric signal sent by a timing circuit, g-switch, or accelerometer feeding a pyro control system. I worked on the parachute for NASA's Genesis mission that returned samples of the solar wind to Earth, and it used pyrotechnic line cutters. Actually, it was not strictly a parachute, it was a parafoil, which unlike a parachute generates aerodynamic lift, not just drag. Unfortunately, due to a g-switch installed upside-down on the re-entry vehicle, the parafoil never got the command to deploy. Had it deployed, it would have opened with "brake" lines (that pull down on the trailing edge of the parafoil) shortened to reduce the forward opening surge you get with a parafoil. After the initial opening transients had decayed pyro line cutters would have severed the short lines maintaining ~60-cm loops in the brake lines, letting those loops straighten and the brake lines go to full length, essentially "coming off the brakes". In helicopter drop tests of the parafoil that system worked very well. The folks at Pioneer Aerospace, who built the Genesis parafoil, spoke of using such pyro devices in a wide range of parafoil and parachute applications.

I don't know what Dragon uses, but large air-drop parachutes use a "reefing" technique. There's a "reefing line" around the circumference of the parachute that controls its expansion: 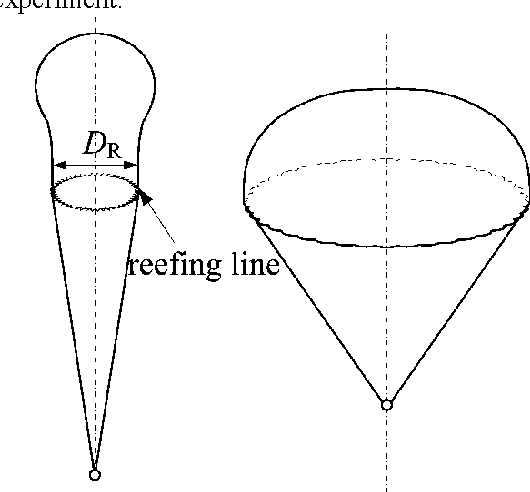 The (significant) forces trying to inflate the parachute pull the line through, but it takes some time during which the parachute is only partially inflated and the deceleration force is reduced. In the simplest systems, the length of the line controls the time it takes for this to happen: 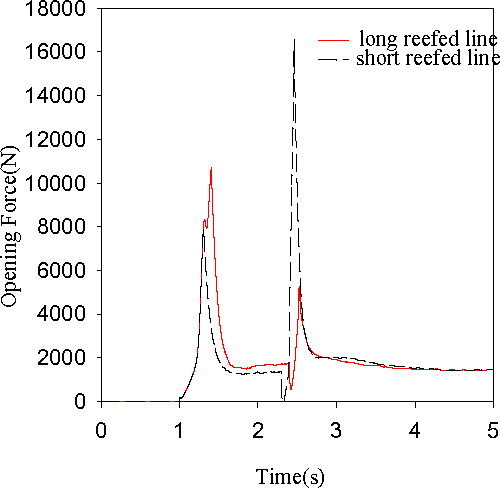 The line has a tail piece hanging below the parachute that slowly feeds for a short time, then the parachute becomes un-reefed and can expand as the free end feeds through the pockets in the chute. The line itself is parachute cord with limited stretch: It holds firm at a particular size, until it doesn't.

More complicated systems can use more than one line, and control their release timing more precisely. From the video, it looks like SpaceX might be using two of these at separate levels in the parachutes. According to a test report, both Apollo and the Space Shuttle boosters used a two-stage reefing system controlled by pyrotechnics.

Not the answer you're looking for? Browse other questions tagged landing parachute or ask your own question.

17
What are the disadvantages of parachute+airbag for atmospheric landing, versus rocket-based?
10
Why does Soyuz use a single large parachute vs 3 on most American capsules?
11
Why does the Soyuz spacecraft's parachute have so many lines?
19
Why does the Soyuz parachute pulsate?
4
Does the Mars2020 lander need a new parachute design?
5
Does deploying the parachute dehermetize Soyuz?
4
How do Mars spacecraft control attitude on final descent and landing?
3
Testing a parachute for a Mars landing using a wind tunnel at hypersonic speed and Martian pressure?
5
How exactly were solid-fuel rockets added to the parachute lines of the Voskhod capsule?
5
How do Crew Dragon's main parachutes deploy?