Are robot arms ever used for attitude control in space?

Motion of a robotic arm mounted on a spacecraft presents an interesting challenge from a control perspective. A robot arm, such as Canadarm (space shuttle) and Canadarm2 (ISS), has significant mass compared to the spacecraft and thus its motion can perturb its attitude as well as its position. In a perfect world, one has plenty of propellant for attitude control thrusters to compensate for robotic arm motion. However, propellant is at a premium and even if plentiful, can impinge on either the robot arm itself or the payload that it is trying to manipulate.

This got me thinking... If a robot arm can cause rotation/translation of a spacecraft, it could theoretically be used as an attitude controller of sorts. This would lead to a much more complicated dynamical control problem because the final pose of the robot end effector is greatly influenced by the path taken. But nonetheless, in theory this could work if the robot arm mass is significant (e.g. w/ a payload caught). Also, if the robot arm is powered primarily by solar panels, it could theoretically be used over a longer span of time.

At least, this is all theory. In practice, are spacecraft robotic arms typically/ever used for attitude control, either as part of its payload-catching mission or as a non-standard method of attitude control? I'm not limiting myself to just the ISS or space shuttles, and am open to any robotic arm in space.

In theory, yes. In practice, no. The problem is gimbal lock, which is problematic even for practical attitude controls that depend on moving masses such as reaction wheels or control moment gyros. Gimbal lock will rear its ugly head with a robotic arm attitude controller in no time short.

At least it has been attempted. 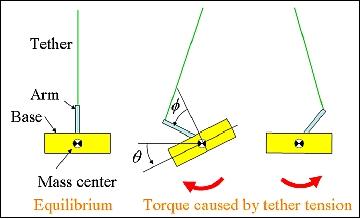 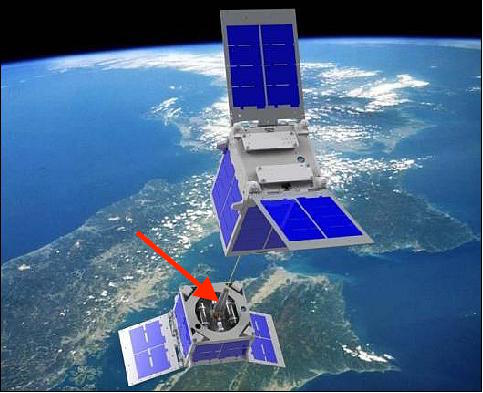 above: annotated to indicate the robotic arm which can adjust the attitude of the nadir-facing satellite. "Figure 2: Artist's rendition of the STARS-2 tether mission after deployment (image credit: Kagawa University)" from here.

In my question How well could the tether tension method of attitude control actually ultimately work for a cubesat system? I talk about STARS-2 which was launched and intended to test the use of a robotic arm for attitude control. I believe there was some issues and not all aspects were tested before reentry though. See Initial Orbital Performance Result of Nano-Satellite STARS-II for more information on that.

There is a follow-up mission called STARS-C. According to Spaceflight101's Miniature Satellite deployed from Space Station for Orbital Tether Experiment it was deployed in 2016, though so far I have not found further information, or if it has an articulated arm holding the tether for attitude adjustments.

An example of a fine adjustment might be a bit of slewing to keep a spacecraft pointed at a fixed spot on Earth during a few second measurement or exposure, to cancel the ~7 km/s apparent motion of the surface. There may even be historical examples of that.

However your question asks if this has been done already, and the only case I know of so far is STARS-2 and possibly STARS-C.

Instead of using a complicated robot arm that already has a task, much simpler and cheaper reaction wheels are used.

A Variable Speed Control Moment Gyro (or VSCMG) provides somewhat similar mechanism of the rotating arm, while also having a reaction wheel at the end of it. It's perfectly explained by Dr. Schaub in this Coursera video.

The ISS is equipped with two such VSCMGs if I recall correctly.

Not the answer you're looking for? Browse other questions tagged attitude robotic-arm canadarm or ask your own question.

3
What are robot arm singularities in the context of the Space Shuttle and/or ISS?
7
How well could the tether tension method of attitude control actually ultimately work for a cubesat system?
-1
How can articulated spacecraft components increase the risk of gimbal lock?