This answer links to history.nasa.gov's SP-404 Skylab's Astronomy and Space Sciences. In what looks like chapter 2, page 14 there is mention of Skylab's electrographic camera, shown below.

In the image I see what looks like a Cassegrain optical telescope except that there are also electron trajectories shown and a magnetic field.

Question: How did Skylab's electrographic ultraviolet camera work? How does the magnetic field contribute to the operation, and why is that curved surface that looks just like a Cassegrain hyperbolic secondary mirror actually curved? 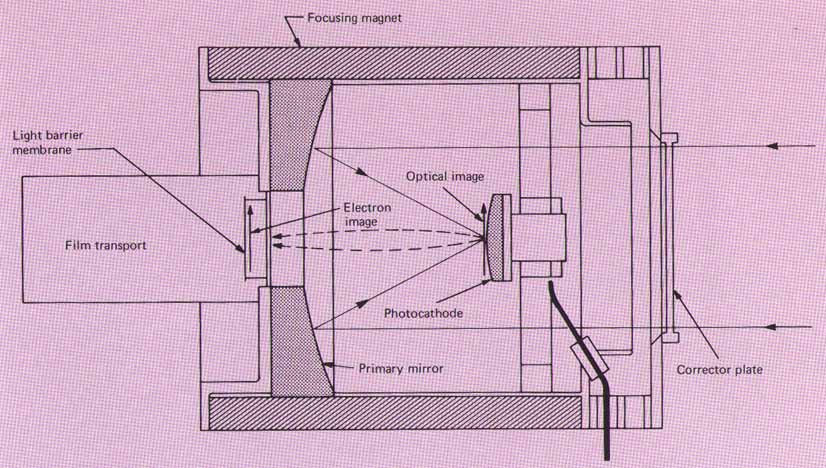 Similarly to night vision devices, the light sensitive part is the photocathode, which releases electrons when hit by photons. The electrons at the photocathode are accelerated by the -25 kilovolt bias, which allows them to be focused with good resolution onto a film surface using the magnetic field.

[...] we have been developing a series of magnetically focused electrographic cameras utilizing front-surface alkali-halide photocathode [...] In these devices, the photocathode is mounted at the focus of an optical system which is partially contained within the imaging device. 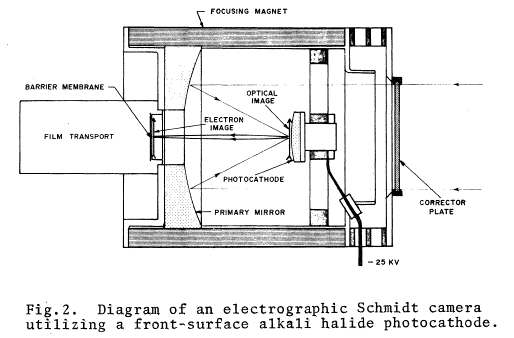 So, apparently, the secondary mirror does not actually work as a mirror (the optical path ends here) and its shape only corrects the field curvature. See Schmidt camera.

Not the answer you're looking for? Browse other questions tagged imaging observation telescope skylab or ask your own question.

7
How is WISE continuing to work without coolant?
4
How does one get Context Camera (CTX) images from Mars with certain identification numbers?
6
How far away can spacecraft be seen with an optical telescope?
15
How was Skylab's orbit inclination chosen?
5
How did Skylab's “space shower” work?
17
Are space camera sensors usually round, or square?
2
How (the heck) does SOHO's SWAN camera image the entire 4π sr celestial sphere?
10
At what altitude did the Skylab space station disintegrate?
6
What did Skylab 1 carry in its nosecone?