What did JPL's 1939 lunar lander look like and what practical aspects of landing on the Moon did this engineering design address?

According to Wikipedia's Jet Propulsion Laboratory:

During JPL's Army years, the laboratory developed two deployed weapon systems, the MGM-5 Corporal and MGM-29 Sergeant intermediate range ballistic missiles. These missiles were the first US ballistic missiles developed at JPL.7 It also developed a number of other weapons system prototypes, such as the Loki anti-aircraft missile system, and the forerunner of the Aerobee sounding rocket. At various times, it carried out rocket testing at the White Sands Proving Ground, Edwards Air Force Base, and Goldstone, California. A lunar lander was also developed in 1938-39 which influenced design of the Apollo Lunar Module in the 1960s.6

Question: What did JPL's 1939 lunar lander look like and what practical aspects of landing on the Moon did this engineering design address?

The Jet Propulsion Laboratory didn't exist under the JPL name until 1943-1944. What existed in 1938-1939 was its predecessor, rocketry experiments at the Guggenheim Aeronautical Laboratory at the California Institute of Technology (GALCIT.)

Looking at the source that Wikipedia provides (To Reach the High Frontier: A History of U.S. Launch Vehicles, pp. 39-42), there's no evidence that GALCIT designed a lunar lander in 1938-1939. What the source does say is that the British Interplanetary Society (BIS) designed a lunar landing vehicle in 1938-1939 which later influenced the Apollo Lunar Module. So, I think the statement in Wikipedia which you have boldfaced in your question is a misreading of the source by the Wikipedia editors.

The BIS lunar spaceship design in 1938-1939 used mostly solid fuel rockets, meaning a large number (5) of Earth-to-Moon propulsion stages, together with a sixth stage for landing on the Moon and returning to Earth. See 1, 2, 3. 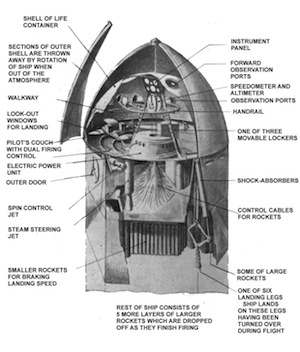 Not the answer you're looking for? Browse other questions tagged the-moon history lander jpl or ask your own question.

-1
Which Chinese citizen co-founded JPL? Who are JPL's “founders” in general?

8
What is the temperature variation between the lunar day and night on the moon?
19
What would a lunar eclipse look like from the surface of the moon?
3
How did they sweep dust on the moon from inside the Apollo Lunar Lander?
29
What did the sky actually look like from the Moon?
34
How did the Lunar Module dock with the rest of Apollo 11 and what is the “CSM”?
3
Bombing Moon and Mars: What would it look like?
8
Do we know why communications with Beresheet and NASA were lost during the attempted landing of the Moon lander?
2
How fast were the Lunar Command Module and Landing Module traveling around the Moon when they reconnected?
4
What did the Apollo 12 multispectral Four-Camera system look like?
4
What is the purpose and necessity of this giant structure being used in tests of China's Mars lander?