How (the heck) do they know some lakes on Titan are 100 meters deep?

point out that some lakes on Titan have been measured to be quite deep, 100 meters in some cases.

Both articles point to the April 15 Nature Astronomy article Deep and methane-rich lakes on Titan but it's paywalled, but enquiring minds want to know!

From the JPL news article:

On its final flyby of Saturn's largest moon in 2017, NASA's Cassini spacecraft gathered radar data revealing that the small liquid lakes in Titan's northern hemisphere are surprisingly deep, perched atop hills and filled with methane.

The new findings, published April 15 in Nature Astronomy, are the first confirmation of just how deep some of Titan's lakes are (more than 300 feet, or 100 meters) and of their composition. They provide new information about the way liquid methane rains on, evaporates from and seeps into Titan - the only planetary body in our solar system other than Earth known to have stable liquid on its surface.

Question: How the heck do they know that some lakes on Titan are 100 meters deep?

Answer(s) to Why are Titan's lakes “black” in radar images rather than transparent? point out that at these radar frequencies the hydrocarbons are fairly opaque to radar.

This article suggests that the radar can penetrate the lakes and reports them to be hundreds of meters deep. The space.com article referenced seems to be sourced from a Geophysical Research Letters article from 2008 (not paywalled) which gives the radar wavelength (2.2cm) and claims that it would be absorbed in 2-20m of clean hydrocarbon, but also give other less direct ways of estimating lake depth which give higher values.

A final, and completely independent, measure is radiometric. The darkest parts of some lakes, generally the largest ones, are ‘black holes’, offering no measurable radar return down to the instrument noise floor of ∼ −26 dB [Stofan et al., 2007]. This requires not only that the surface reflection be very small (consistent with a smooth surface of a low dielectric constant material, such as a liquid hydrocarbon surface unroughened by waves) but also requires that the liquid be deep and/or lossy enough to suppress a bottom reflection.

The paper itself (I have access) says and shows that they are detecting the bottom of some lakes with their radar with a maximum depth of 105+/-6 meters. The radar reflection off the bottom is much fainter than off the surface, but still distinct and clear.

The attenuation (17 dB/us) fits a mostly-methane composition (best fit 69% methane, the rest mostly split between N2 and C2H6), but if the lake had been mostly ethane, propane or higher-order hydrocarbons, there would have been too much attenuation to see the bottom of the lake.

We used super-resolution algorithms previously applied to radar data acquired over Ligeia Mare, Punga Mare and Ontario Lacus 10,11,12,13 to enhance radar range resolution15 and improve bathymetric detection capabilities. The results of the processing revealed a clear detection of the floor of lake E along 20 km of radar transect, in addition to the echoes reflected from the surface of the lake. Figure 3c depicts the bathymetry of lake E, which reaches a maximum depth of 105 ± 6 m (1σ) and appears to have an asymmetric lakebed with a relatively gentle slope (about 0.16° ± 0.03°) towards the east and a sharp rise on the western side. This could represent the stepped topography observed in empty lake basins which, along with other morphometric indications7, can be interpreted as evidence for basin agglomeration through scarp retreat.

Applying the method as described in ref. 10, a liquid attenuation of 17 ± 7dB μs−1 (corresponding to a loss tangent equal to 4.6 ± 1.8 × 10−5) is estimated from the ratio of surface to subsurface power (Ps/Pss) as a function of increasing depth (Fig. 3e). We found that, similar to Ligeia Mare, the attenuation of Winnipeg Lacus requires a methane–nitrogen dominated composition (best fit values of 69% CH4, 15% C2H6 and 16% N2 and 1σ error values of 54–80% CH4, 35–0% C2H6 and 11–20% N2 in volume) to match laboratory measurements of hydrocarbon loss tangents16. If a significant fraction (>~50%) of ethane or higher-order components (for example, propane) were present, the attenuation would have been greater than the one observed and able to suppress the subsurface returns (see Supplementary Fig. 1). 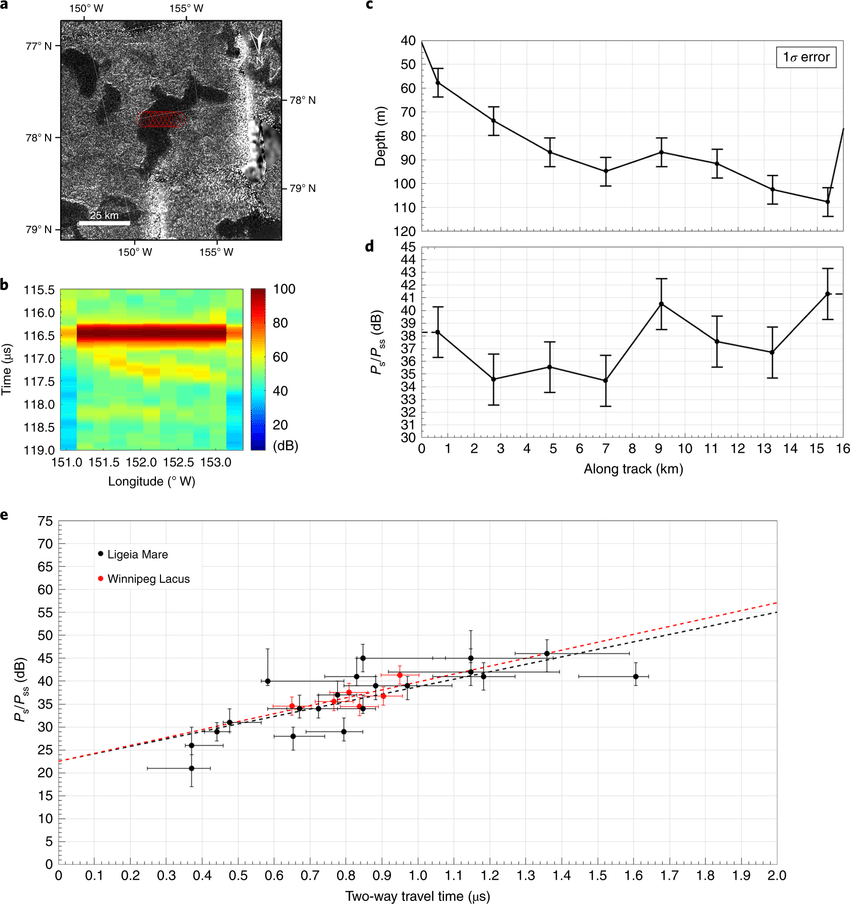 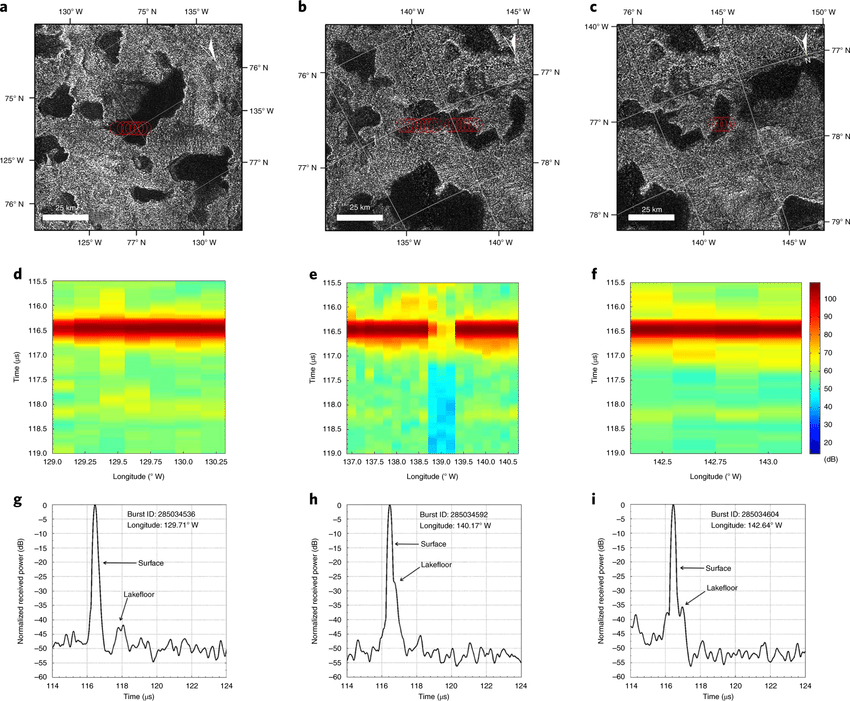 Ambiguous lakefloor detections of Oneida Lacus and lake C Ambiguous detections happen when waveforms do not show clear subsurface returns due to low signal-to-noise ratio (SNR) or radar resolution. a–c, SAR mosaics and −3 dB beam-limited altimeter footprints (red circles) over liquid for Oneida Lacus, and the east and west parts of lake C, respectively. d–f, Super-resolved radargrams of the same lakes and portion of lake. g, A waveform acquired over the central portion of Oneida. Detection of the lakefloor is ambiguous due to the low SNR. Some echoes suggest depths greater than 150 m. h,i, Waveforms acquired over the S-shaped lake or lake C show subsurface returns not or partially resolved by super-resolution algorithms. These waveforms indicate that observed regions are shallow, with depths not exceeding 20–30 m. 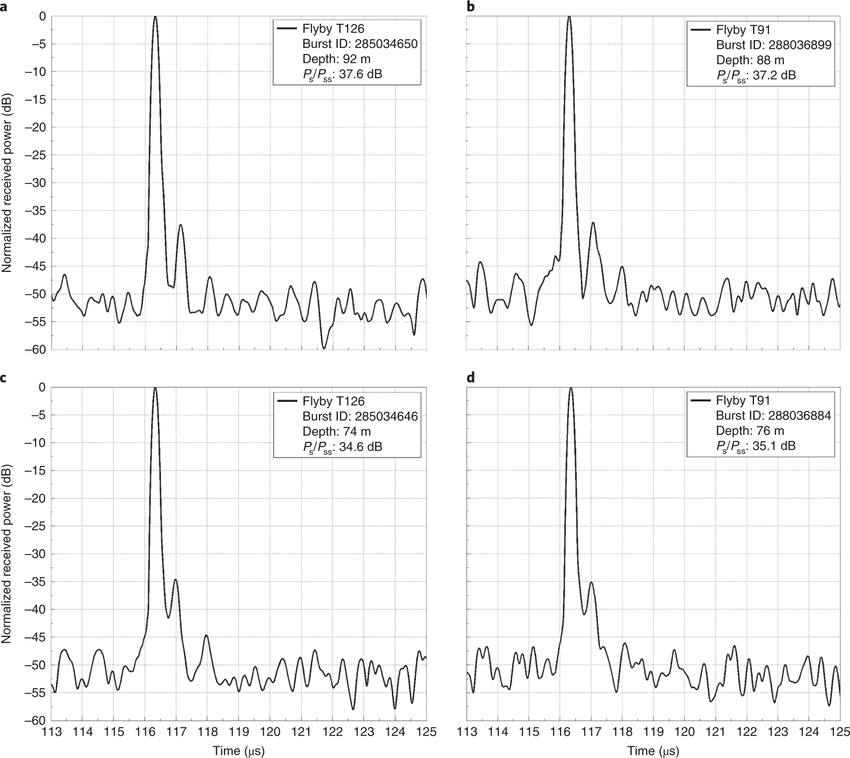 From Cassini observations the methane-ethane mixture (with methane by far the largest component, maybe with some dissolved nitrogen) appears so pure that its absorptivity at the RADAR instrument's Ka-band frequency is quite low. That's how it could see so deep — not just 100 m, but 160-170 m.

The paper The Bathymetry of a Titan Sea by Marco Mastrogiuseppe et al. (Geophysical Research Letters. 41. 10.1002/2013GL058618) covers the technique used for the T91 Titan flyby (2013 May 23) and results. The radar was looking straight down, being used as an altimeter and maximizing the specular reflection intensity from the nadir area. An altimeter records the signal returned from a nadir-pointed transmitter, either radio or lidar, and from the propagation time you can infer, very accurately, the distance from the spacecraft. If the first reflecting surface is a transparent liquid, subsequent reflections from deeper interfaces can be seen in the data, and this is what Mastrogiuseppe saw. The radar track crossed Kraken Mare and the receiver got distinct secondary returns from the seabed. I was in the Cassini Science Team meeting when he announced this — it caused quite a stir! (Non-horizontal reflecting surfaces, such as a sloping seabed, can move the specular point away from exactly nadir)

Another radar observation, a bistatic experiment where the Cassini RADAR instrument received a signal from the big Deep Space Network transmitter at Goldstone that had reflected from the surface of Ligeia Mare, indicated the nearly-pure methane composition of that sea. The composition was inferred from the experiment's measurement of the refractive index (actually, the electric permittivity) of the liquid. The composition of Kraken Mare is expected to be essentially the same as that of Ligeia. This JPL press release describes this experiment. I don't include a scholarly reference because the PI of that experiment hasn't yet formally published the results! Anyway, knowing the refractive index gives you the speed of the radio waves in the medium, so you can translate the two-way propagation time in the altimeter data to a depth.

As far as the lakes (smaller than the seas) go, as the sources you cite state, the last close Cassini flyby of Titan used this technique to measure depths of some of these lakes. Some researchers had proposed that the lakes are considerably shallower than the seas. This experiment put an end to that idea!

12
Why are Titan's lakes "black" in radar images rather than transparent?
8
How quickly might a Titan rover or drone get covered in oil and dirt? Will it need windshield-wipers?
3
Are there both "lake" and "sea" designations on Titan? Officially or otherwise?

4
Is Cassini equipped for detection of non-water-based exobiology?
9
Why would Cassini need to reach 64 degrees inclination before "threading the needle"?
6
What would a "water" landing on Titan be like? How viscous is the liquid?
3
Could Liquid Methane on Titan be used as a Heat Source?
12
Why are Titan's lakes "black" in radar images rather than transparent?
8
How quickly might a Titan rover or drone get covered in oil and dirt? Will it need windshield-wipers?
1
Does the Dragonfly project (quadcopters on Titan) envision attached RTG's or would they be static and revisited for charging?
3
Are there both "lake" and "sea" designations on Titan? Officially or otherwise?
7
How do they know the sub-surface radar reflections (potential underground ice or "lakes") on Mars are not natural dielectric or metallic in origin?
9
How do they know that the Dragonfly helicopter won't get quickly coated in tholin muck? Any desliming technology for camera lenses or propellors?