This video: Is Apollo 11's Lunar Module Still In Orbit Around The Moon 52 Years Later? claims, based on orbital simulations, that there is a chanche that the lunar module of Apollo 11 might be still orbiting the Moon.

Is this claim consistent with the wider picture? My questions are about the issue:

A related but different question in Astronomy SE: Would we have spotted the ascent stage of Apollo 11's Eagle if it was still in orbit around the Moon?

Starting around minute 6 of the video frozen orbits are discussed, and some example GMAT simulations are run to explain how lunar orbits can be simulated including up to order 160 in the Moon's gravitational spherical harmonics, which have been very accurately mapped by the GRAIL mission.

The video then links to the study itself:

The Apollo 11 “Eagle” Lunar Module ascent stage was abandoned in lunar orbit after the historic landing in 1969. Its fate is unknown. Numerical analysis described here provides evidence that this object might have remained in lunar orbit to the present day. The simulations show a periodic variation in eccentricity of the orbit, correlated to the selenographic longitude of the apsidal line. The rate of apsidal precession is correlated to eccentricity. These two factors appear to interact to stabilize the orbit over the long term.

To the linked question:

Would we have spotted the ascent stage of Apollo 11's Eagle if it was still in orbit around the Moon?

Screen shots from the video linked in the question: 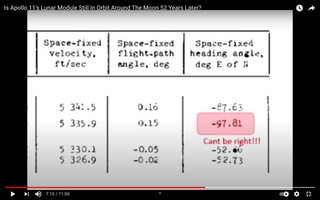 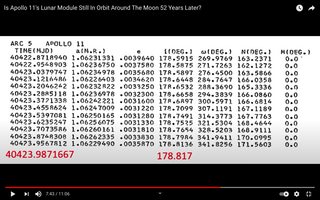 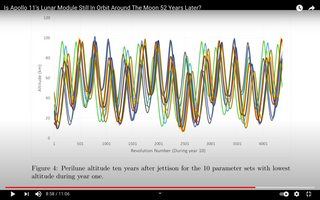 The accepted answer covers the key question, but just to answer the two subsidiary ones as well:

Yes. See this series of comments in the Apollo 11 flight journal, starting about 45 minutes after LM separation:

130:57:08 Duke: Hello, Apollo 11. Houston. Coming up to about 4:30 LOS. You're looking great on all your systems. Eagle is purring right along on a - After an hour and thirty [minutes] on, without any cooling, the PNGS is still looking good. Over.

PAO [about 132:00]: One of the things that we're watching with interest here in Mission Control is the Lunar Module. At the time Aldrin and Armstrong left the LM and came back into the Command and Service Module, they switched over to the secondary coolant loop as part of a test that we are running to determine just how long the Primary Guidance and Navigation System will last without cooling. The primary guidance system is not cooled on the secondary loop which provides backup cooling for the secondary guidance system and it's always been a point of interest just how long the primary guidance system will survive without the cooling - estimates range up to several hours.

PAO [about 134:00]: A few minutes ago you heard Charlie Duke advise the crew that we show the LM platform is about to go. We'd mentioned that prior to leaving the Lunar Module, the crew had deactivated the primary coolant loop, placing the secondary coolant loop in operation aboard the LM. This means that the primary guidance system does not get cooling. This is part of a preplanned test to find out just how long the primary guidance system would continue to function without cooling. We had predicted in advance that it would - may not - it would possibly not last much longer than an hour or so, but at the time Charlie Duke reported the platform had just gone down on the LM, it had been in operation without cooling a little more than four hours. We had an approximate time from the crew of transferring to the secondary coolant loop of about 129 hours, 40 minutes; and we got the report from Duke that the LM guidance platform was no longer usuable at 133 hours, 55 minutes.

So it looks like there was telemetry for about 3h 45m after LM separation, at which point the guidance system failed and signal was lost.

The communication could be two-way, though it's not clear if it was for Apollo 11: the later flights sent the signal to fire the deorbit RCS from the ground, rather than from the CSM or having it programmed on a timer.

From the above, it looks like they kept contact until signal was lost due to the guidance system failing, and had a reasonably firm idea of the orbit at that point.

At lunar module jettison, the two ascent batteries had delivered 336 A-h of a nominal total capacity of 592 A-h. The ascent batteries continued to supply power for a total of 680 A-h at 28 V dc or higher.

This suggests that even if the guidance system had remained functional, the LM probably would have lost power very soon afterwards anyway - by the time this happened, the batteries were already past their nominal capacity. So it wouldn't have been possible to maintain the connection for much longer even in an ideal situation.

Apollo 9 and 10 had tried similar experiments. Apollo 9 had a slightly different rating for capacity (620 A-h) - not clear if the actual batteries were the same - and at the time of loss of signal, had obtained a total of 656 A-h from the two batteries. (Mission Report, page 9-19)

Apollo 10 let the ascent stage batteries discharge as well; it found that they gave 676 A-h out of a rated capacity of 592 A-h. (Mission Report, page 8-2). So both were fairly close to the Apollo 11 level, suggesting that it wouldn't have lasted much longer.

The problem for long-term tracking is that these three and a half hours of data only represented a couple of orbits - so it's hard to extrapolate very much from that data.

Not the answer you're looking for? Browse other questions tagged nasa apollo-program apollo-11 lunar-module lunar-orbit or ask your own question.