Why do some meteors explode in air?

I was reading about the Tunguska and Chelyabinsk meteors and I wonder what would cause a meteor to explode in the air, instead of hitting the surface?

The Chelyabinsk meteor was travelling at over 65,000 km/h when it hit the brunt of the atmosphere 23 km high in the air. This is 60 times the speed on sound! NASA estimates that the meteor's mass at this point was 10,000 tonnes, and it had a diameter of 20 meters.

At these incredible speeds, the body is placed under immense stress. Colossal pressure is generated head-on, and the body disintegrates laterally in something called the pancake effect. This creates an even larger surface area of debris which causes even more stress. Therefore, the meteor very quickly releases most of it's kinetic energy through this cascade of explosions.

In this case, the seismic shock generated by the air burst measured 2.7 on the Richter scale and caused injuries in a large radius. A report from the University of Western Ontario stated that the explosion caused by the meteor was equivalent to 470 kilotons of TNT.

The same logic applies to the Tunguska meteorite and indeed, all meteorites. The friction generated by Earth's atmosphere causes the outright disintegration of most smaller foreign bodies. When a body is as large as the Chelyabinsk meteorite however, only a small portion is ablated away during re-entry. Therefore the rest of the meteor makes it to the dense portion of the atmosphere, causing a violent explosion.

The opposite of this is if a meteor is too large. In this case, the meteor will cross the atmosphere and collide with the ground before a pressure wave (traveling at the speed of sound in the solid) can even get from the front to the back of the object. There simply isn't time for pressure-induced fragmentation of the entire object to occur, meaning the kinetic energy isn't dissipated until the entire body slams into Earth. 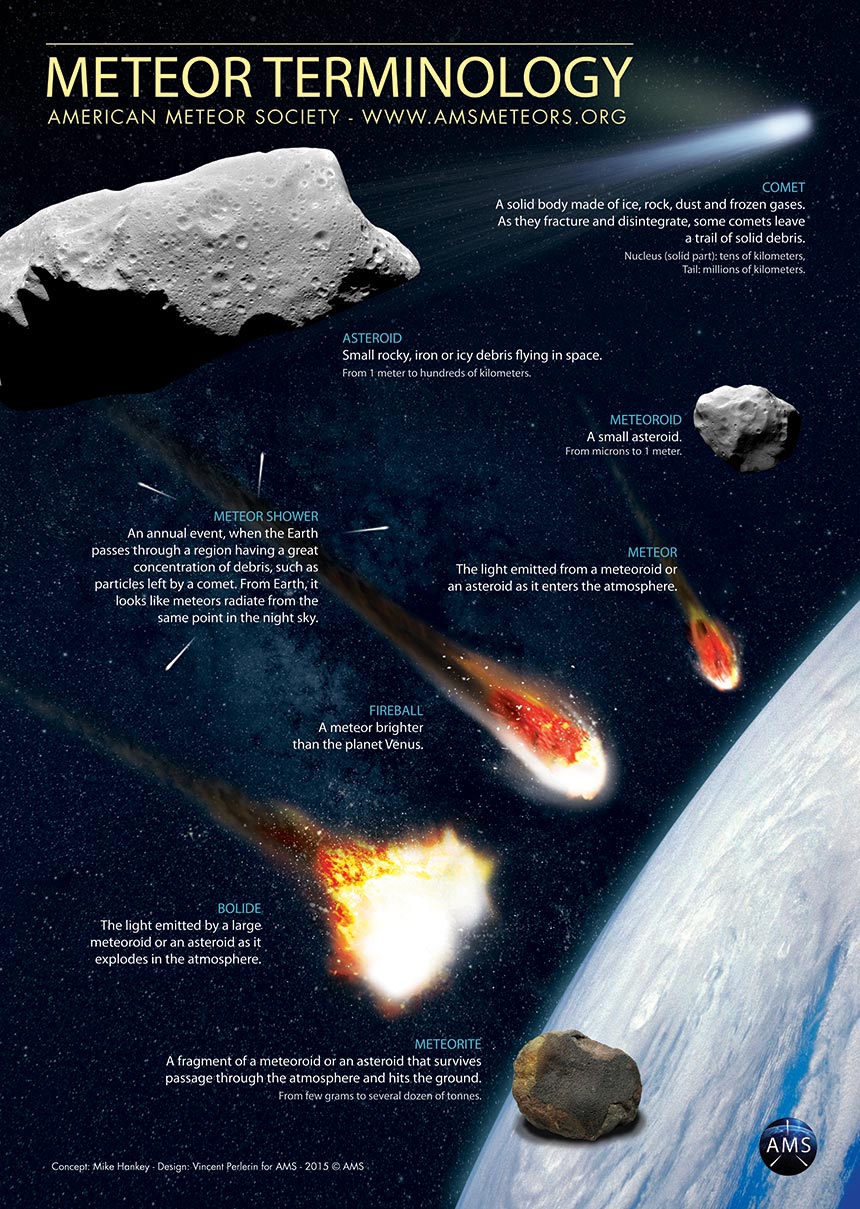 In the name of pedantry, here is a chart (courtesy the American Meteor Society via @TildalWave) details the naming convention for foreign bodies in and outside the Earth's atmosphere.

Not the answer you're looking for? Browse other questions tagged atmosphere physics reentry meteors or ask your own question.

51
Why don't the Space Shuttle's tires explode in the vacuum of space?
10
What are reentry speeds of space vehicles?
7
Meteor color hints at chemistry
3
What are the "NASA research assets" at Thule that were not recently destroyed by a meteor?
1
What would happen if air hitting heatshield was ignited?
6
What effects did the different air pressure and air composition in certain spacecraft have on astronauts?
1
Could a helium balloon on Mars and on Triton float at air pressures lower than it could on Earth due to the bodies' low gravities?
2
Did Mars Express get hit by a "Meteor hurricane"? (2014 October 19, comet C/2013 A1) Was it observed at all?
2
What is the temperature of the atmosphere at the height where meteors burn up and does that temperature significantly help cause the burning up?