What is the problem with aborting a Space Shuttle launch?

Why could the Space Shuttle not abort? What problems were there?

There were four types of intact aborts designed for Shuttle (not counting pad aborts). An intact abort is defined as one that returns the Orbiter intact to a runway.

In order of least to most desirable:

Only the ATO was ever performed in the Shuttle program. 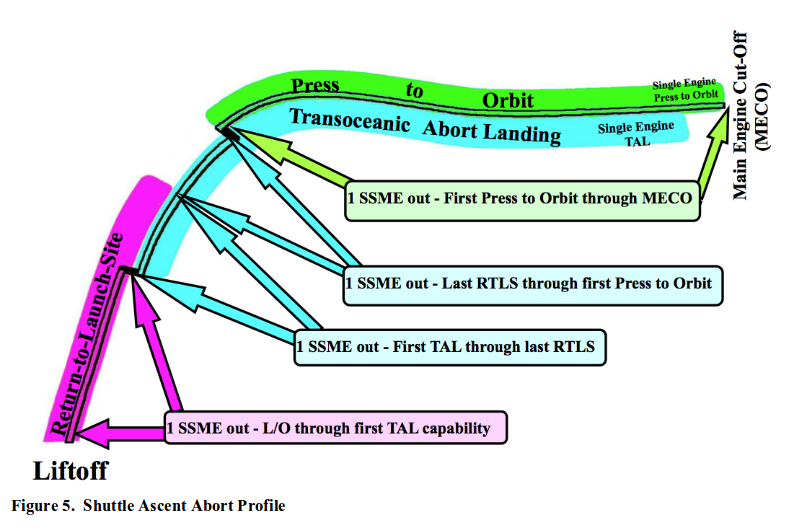 There was a type of contingency abort called East Coast Abort Landing (ECAL) that could have allowed the orbiter to land...but since it was not a certified abort mode, it was still considered contingency.

Aborts could be performed either for performance reasons (failure of, or underperformance of one or more main engines) or systems reasons (cabin leak, loss of cooling, etc).

The aborts overlapped to some degree. Abort selection was based largely on vehicle state at the time of failure and performance. For example, the last possible time to select RTLS ocurred when the vehicle did not have enough propellant remaining to burn its velocity down to zero and then back up high enough to make it to Kennedy Space Center.

This paper gives good detailed information about all I have said.

The reason that the SRBs couldn't be "jettisoned" at any desired time is because the separation system as designed was not powerful enough to safely jettison the boosters if they were delivering a significant amount of thrust. The separation system simply severed the bolts holding the boosters to the External Tank and fired booster-mounted motors to provide clearance between them and the accelerating Orbiter/ET stack. If significant thrust loads had been present, then significant forces and moments would have been applied to the Orbiter/ET stack. It is possible that a more robust system could have been designed, but it wasn't incorporated in the system we had.

There was some discussion in the other question about the ejection seats used in early Columbia missions. These had limited utility - at a point in ascent the plume expanded out so much that the seat trajectory would pass through it and a "Negative seats" call was made. Similarly, on entry, the vehicle had to be going slow enough that a relatively unshielded ejecting crewmember could slow to a safe velocity.

I deeply wish that a better abort/escape system had been designed in, but that was not the reality of STS.

Edit: I just noticed that the crew training handbooks for intact and contingency aborts are available on the JSC FDF page! These are wonderful references for STS aborts.

There were many abort modes on the Space Shuttle during launch, and the options changed depending on the specifics of each portion of the flight.

The main issue is that separating from two burning SRB's (Solid Rocket Boosters) producting 2.8 million pounds of thrust each is just plain not going to work. That is, the tiniest asymmetry in the disconnect and you are likely dead.

Thus the Shuttle was stuck for the first 2 minutes and change until the SRB's burned out.

In the hypersonic airflow, the slightest deviation from flight could destroy the Shuttle airframe, which is part of why abort was so difficult.

Once the SRB's were dropped, there was an RTLS (Return to Launch Site) which had been described by astronauts as better than nothing, but not with great confidence.

This would require the Shuttle to retain the External Tank for fuel, gimbal the engines to get high enough, and turn around and fly back towards the launch site (once out of the atmosphere to protect from the airflow) and then drop the tank once it had the energy to glide back to Kennedy.

There were Abort to Orbit modes (Used once I believe). Abort Once Around, and more.

But for much of the flight, with SRB's burning the options are hugely limited, since they cannot be turned off. They can be flight terminated by blowing a linear charge along the length of it, but that would also take out the tank, and thus probably the Orbiter if still attached.

Not the answer you're looking for? Browse other questions tagged launch space-shuttle abort or ask your own question.

39
Why didn't the Space Shuttle have a launch escape system?
19
What would have happened if only one Space Shuttle SRB ignited?
4
Space Shuttle and SSME Servicing Procedures for Re-Launch
18
Do the solid rocket boosters of the Shuttle and SLS have a self-destruct system and was it activated during the Challenger disaster?
5
Ground personnel proximity to space shuttle at launch?
5
What military forces provided Space Shuttle search and rescue?
4
Why would a space shuttle have flown a normal first-stage and early-second-stage ascent trajectory during an RTLS abort?
4
Space shuttle cabin atmosphere system
1
Is a low-altitude, stable glide really absolutely needed to bail out of the space shuttle?