Burns for EML-1 to LLO

Wikipedia gives 0.64 or 0.65 km/s for going from LLO to EML-1 or back. I would like to know what the delta v of the specific burns involved are, and if my initial calculations are close, I don't see how their number can be correct.

First burn, I consider getting into an orbit with apogee at 61,000 km, which is at the radius of EML-1. Perigee for the elliptical orbit would be 2.27 km/s, with the difference from LLO being 0.641 km/s, which is our first burn.

NOTE: the numbers here are wrong staring with 0.714 km/s; see my answer for details.

Second burn, I calculate the speed at apogee of that elliptical orbit to be 0.068. However, EML-1 is circling around the Moon, which I would calculate by:

If you added these, it's 1.355 km/s total, and both burns are of about equal magnitude. I don't think that's right. These calculations are probably correct for the equations I'm using, but I strongly suspect that the underlying assumptions are highly flawed. Perhaps Earth's gravity has a major effect in the mechanics? In other cases, the EML-1 and EML-2 points are touted as extremely low delta v points to reach, but these numbers would seem to somewhat undermine that, if the 0.641 km/s burn is going "out of the way". But I'm not sure.

Does anyone have any serious numbers for the transfer from LLO to EML-1?

I realized an error in the math in my question that is significant enough to leave as a formal answer. The error occurred here, and I'll point it out in bold.

The distance from the center of the moon to EML-1 is about 61,000 km, but the calculation erroneously plugged in 322,000 km, which is the distance from EML-1 to the center of Earth. If you plug in the intended (and more logical) number, you come to the conclusion that EML-1 is moving at about 150 m/s relative to the moon.

If the orbit direction is the same as the rotation of EML-1 about the moon, then we subtract 150 m/s - 68 m/s = about 81 m/s (rounding after the fact here) in order to get the burn necessary to match the velocity vector of EML-1 for a projectile in transfer from LLO. As km/s, that is 0.081, so it would add fairly marginally to a 0.6 km/s burn at a perigee at LLO altitude, for 0.681 km/s total. The altitude of LLO is also a fungible number which can account for the range given in the slide referenced in the other answer, in additional to a possibility of some marginal gravity drag at LLO departure as well.

Let me embellish on another detail that I blew through in the question. Should it be 150 - 68 or 150 + 68? What direction do LLO orbits typically go in (for planned space missions)? Probably in the direction of the moon's rotation. So let me go point-by-point:

Thus, it should be subtracted, instead of added. Possibility still remains for a 0.13 km/s modification (increase) if the mission is retrograde in LLO, which is admittedly unlikely. That could be why the range goes from 0.6 km/s to 0.8 km/ in the referenced slide, although I find little reason to ever assume the higher number.

The validity of the approximation is still highly questionable. Perhaps this the number here is still a pretty good ballpark. On Hop's blog, several mentions are given to a approx 0.5 km/s burn to drop from EML-1 into an Earth grazing orbit (not so different from 0.7). That should be a 3-body problem, but you can find that the Earth SOI approximation is very acceptable as a ballpark estimation. If the moon-side follows the same pattern, then we would conclude that 80 m/s is relatively close to the true answer.

This is not a complete answer, but it is a start. I think you may not be able to arrive at correct numbers for a full 3BP maneuver doing piecemeal transfer orbit calculation. Your arithmetic may not ever add up to the real values that way.

The value of 0.65km/s from a halo orbit around Earth-Moon L1 to LLO can be found on this slide from the ULA presentation "Transportation Enabling a Robust Cislunar Space Economy".

There is also a lot to read in Zazzera, Topputo, and Massari's "Assessment of Mission Design Including Utilization of Libration Points and Weak Stability Boundaries" and Koon, Lo, Marsden and Ross’ (KoLoMaRo’s) ”Dynamical Systems, the Three Body Problem, and Space Mission Design" as well.

Bear in mind: the ellipses (and for that matter the distances) in this slide are schematic only. Those are not what the orbits actually look like. 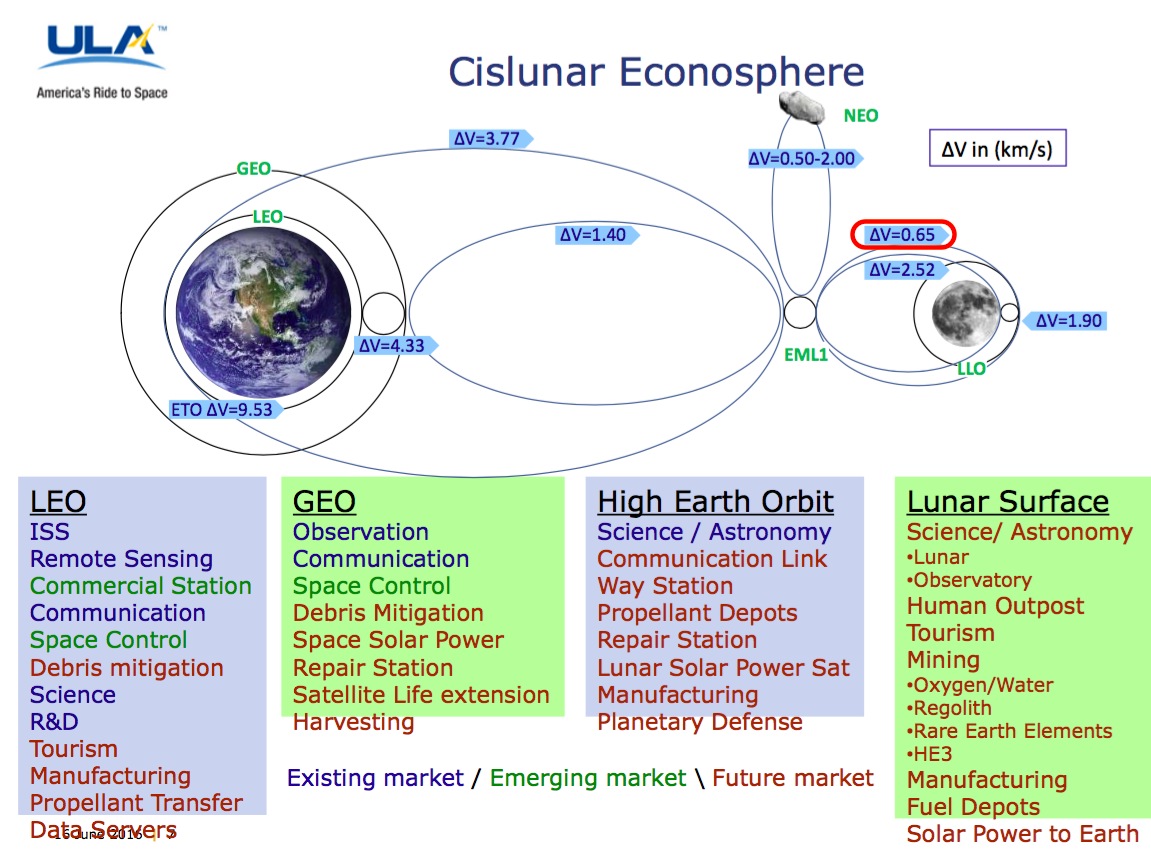 I haven't found an independent source for L2, but but at least the article in the Web Archive cited by Wikipedia seems to treat L1 and L2 as roughly equivalently difficult (or easy) to access. Wikipedia's tabular values for high thrust:

8
For an EML-1 to Mars transfer orbit, would flying to the right or left of Earth be preferable?
5
How does bi-elliptic transfer compare to Low Energy transfers / Interplanetary Transfer Network?
2
Who called the Lagrangian points as "Libration" points and and why was the terminology "Libration" used?
1
Nickname and citation for famous, historic three-body spacecraft trajectory design "manual"; something like "DoKaRoMo"?

6
Minimum Delta V to a staging area in cislunar space for a vertical space gun
10
How could transfers between SEL1&2 and EML Lagrange points be utilized?
12
Low Energy Transfer within Earth-Moon system
1
Why is a Hohmann transfer from an elliptical orbit to a circular one more efficient if done from Perigee?
3
How does one calculate the argument of periapsis of an orbit after an arbitrary maneuver?
5
Orbital insertion with "inertial parachute"?
3
When doing an interplanetary Hohmann transfer, are additional escape and capture burns necessary in addition to the two Hohmann Transfer burns?
4
Calculating the delta V budget from Earth to Mercury
2
Are there uses for these 'quasi iso-propic' supersynchronous transfer orbits?
7
Which of the 2 delta-v calculations for a Mercury orbit insertion from LEO is right and which is wrong?