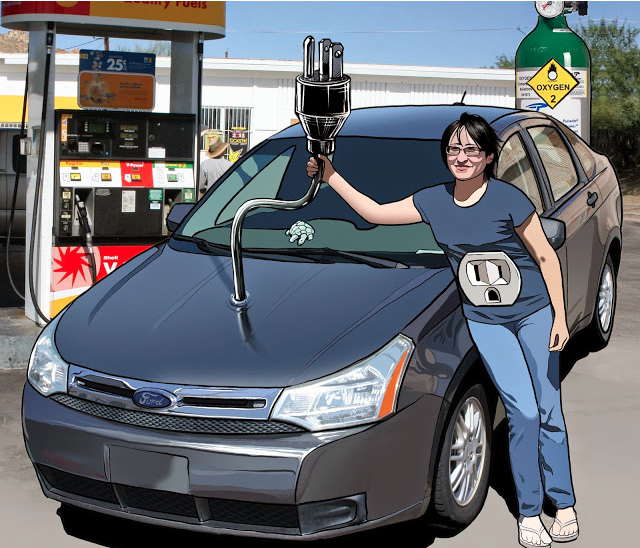 I agree with the other comments regarding thin film photovoltaics being a good source of power. I built an ion thruster that is patented for lifting its power supply against Earth's gravity. A normal xenon ion thruster or "ion lifter," can't lift its power supply because the thrust to weight or mass ratio is too low. In a xenon thruster for instance, electrical energy is used to knock electrons loose from the xenon atoms which requires a fair amount of wattage and that creates power losses especially when considering the added losses in the electrical system and heat generated in the exhaust. Those engines also have erosion issues and normally must run for long periods of time to have much effect. "Ion lifters," were basically toys that required a large external power supply and rely on ambient O2 molecules primarily as the propellant.
The Ion Propelled Vehicle or Self-Contained Ion Powered "Aircraft," just adds electrons to a small percentage of either ambient O2 molecules or to O2 or SF6 supplied by optional onboard propellant tanks. O2 has a strong affinity for gaining extra electrons and so does not require the same ionization energy, it just absorbs electrons produced by the power supply. While the voltage of the power supply is much higher than in a xenon thruster, the current and wattage is far lower, so it was possible to reduce the mass of the power supply significantly. The erosion on the collector surfaces is minimized because it works by a different principal with very little wattage required.

10
Maximum grid voltage of ion thruster
7
How many ion thrusters would be needed to accelerate a 1000 tonne craft at 9.8m/s²?

18
How far from the Sun can solar power be used as a reliable energy source?
3
What are low-mass ways of supplying power for a 4.5kW ion thruster?
21
Can ion thrusters be scaled up?
8
What's the thrust to weight ratio of Falcon 9 at landing?
12
Lightest possible solar array?
11
What is the highest power output ever achieved with an ion thruster?
3
Using interstellar medium as propellant for ion propulsion
5
Why is the thrust to weight ratio of ion thrusters so low?
3
Could the kinetic energy in the Sun's solar wind power an ion propulsion system for an interplanetary spacecraft?
3
Estimating thrust and kg fuel for a generation ship's journey to Alpha Centauri