Like a Crookes Radiometer, could a satellite have a stiff vain to maneuver? With a white side to let light pass and the black side capture light radiation be enough provide radiation pressure to keep it in deep orbit?

Solar powered servos could be used to change the pitch of the sail.

Where this differs from a solar sail is that in this model the sail is firm and flat. One side to capture solar radiation and propel and the other side passive like the radiometer. It differs from a radiometer because it is a solar sail but could rotate sideways to let light pass or have a transparent side while moving towards the Sun and then reverse to use the Sun while traveling away for propulsion.

What satellite has the highest orbit around the Earth?

Can a Solar Cell/Sail Powered Satellite orbit both the Moon and Earth rendezvously?

The drawing shows a Crookes Radiometer.

They seem to spin nicely in even a little bit of sunlight. The common explanation is light pressure on the black vanes.

Unfortunately, they don’t work that way. Photons bouncing off the white side transfer more momentum than ones absorbed by the black: of the mechanism was light pressure, they’d turn the other way. A clue to the correct mechanism is that they don’t work in a full vacuum. It’s probably something to do with the residual gas and the black side being hotter.

Satellites are in much deeper vacuum than a Crookes radiometer bulb. Whatever the mechanism, it won’t be big for a satellite.

But there’s still some potential for using light pressure for various operations. There have been experiments with several kinds of “sails” to gather and use it.

The Mariner 3 and 4 Mars flyby probes had angled vanes at the ends of their solar panel arms which provided passive stabilization of the spacecraft from solar radiation pressure: 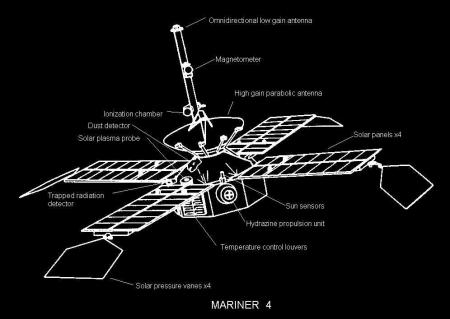 This is exactly what we call a solar sail. This works for orbit maintenance if the orbit isn't too low. If it's too low, the total impulse (force times time) lost to drag over one orbit is greater than the light-pressure (https://en.wikipedia.org/wiki/Radiation_pressure) impulse over one orbit, and the orbit still decays, just slower.

Solar sails have the disadvantage that they require a large area to produce much force. If you turn a perfectly-reflecting sail face-on to the sun at 1 AU distance, the force you get on the sail is 4.5 millionths of a Newton per square meter.

Drag force is given by $Fd = \frac{1}{2} C_d A \rho V^2$, where $C_d$ is the drag coefficient (for orbital speeds and atmospheric densities it is usually very close to 2), A is the projected area, ρ is the atmospheric mass density, and V is the velocity. If that same square meter is face-on to the velocity vector at an altitude of 150 km, where the atmospheric density is roughly $2 \cdot 10^{-9} kg/m^3$ and the orbit velocity is ~7,820 m/s, the drag force generated would be ~0.122 N, nearly five orders of magnitude higher than the solar light pressure force.

Of course, the solar sail isn't always face-on to the sun, nor face-on to the velocity vector, but the averages over one orbit would be around 1/2 to 1/4 of the face-on values. The solar sail suffers from being in Earth's shadow a significant fraction of its orbit (unless it's in a nearly-polar orbit that is face-on to the sun) so its average force over an orbit is a smaller fraction of the face-on value than for drag—drag never turns off! So orbit maintenenance with a solar sail certainly wouldn't work at such low altitudes.

could a satellite have a stiff sail like the white side to let light pass and like the black side capture light to provide enough force to keep it in orbit?

Let's ignore the point Crooke's Radiometer works on different principles. Yes, you can use solar pressure to give your craft acceleration, and yes, changing the surface color will vary the effect magnitude.

In a way, yes — the US Naval Academy cubesat ParkinsonSAT was designed with four faces asymmetrical, with solar panels offset to one side and reflective tape occupying the remaining space, creating an angular moment of solar radiation pressure, and this has succeeded in keeping the satellite spinning at a rate of several RPM for years. Apparently they have used this design in the past as well. Although the principle is different from a radiometer, the result is the same — spinning!

As for using it to change orbits, that doesn't sound even remotely practical.

A Crookes Radiometer was one of my most memorable gifts as a little kid. The fact that sunlight would push the black side more than the white side of each vane proved that atoms exist, or at least so said the back of the package. I was seeing atoms! Changed my life.

As @BobJacobsen points out, these guys require low pressure gas to work, and they need the gas to be pretty much at rest with respect to the spacecraft, otherwise aerodynamic forces would dominate and the configuration would stop when torques due to drag on each vane balanced.

I don't think there is a situation anywhere in space where this would work.

However, on the surface of a body with a very low pressure atmosphere, such as a large asteroid or small planet or Moon, the demonstration might work. But the question is about a spacecraft or propulsion, so this doesn't apply.

below: Image (GIF) of a Crookes Radiometer, from here.

47
What would be the (most difficult) challenge to make a 10,000 year satellite?
19
What artificial satellite has the farthest orbit around the Earth?
13
What is the principle behind Mariner 4's "Solar Pressure Vanes"? In what case(s) would they be effective?
2
Why would photon pressure be needed to keep ParkinsonSAT Spinning?
5
Were Mariner 3 and 4 the only spacecraft to use "solar paddles" to stabilize attitude?
2
How much will Bennu rotate faster and faster with mirrors facing the Sun on its left side?
1
Can modified solar sail use Earth's atmosphere to correct an eccentric orbit?
2
Can orbital maneuvers be performed by a solar sail to correct eccentricity?
1
Diamagnetic Polar Orbit

15
Has a solar sail been used on an orbital mission?
6
Could a solar thermopile be enough to power a small satellite?
7
Is a manned craft powered by Solar Sail feasible from Earth Orbit to Lunar Orbit
3
Will the Planetary Society's LightSail spacecraft's solar panels be articulated during each orbit?
1
Can modified solar sail use Earth's atmosphere to correct an eccentric orbit?
2
Can orbital maneuvers be performed by a solar sail to correct eccentricity?
6
Can a solar sail be added to an ion engine and work better?
1
Diamagnetic Polar Orbit
1
Can a satellite utilize gravity gradient stabilization, solar power, electrodynamic tethering and dynamic quadrupole momentum at once?
1
How does lightsail 2 plan to raise its apogee