What holds SpaceX’s rocket in place in this launch?

On a recent launch video, the gantry is at an angle and only loose tethers are attached as the rocket is prepared for launch. What is keeping it upright and in place at this point?

The engines haven't started and it was like this for several seconds at least. I didn't see the earlier part, I assume the cradle lifted it into place and it was removed. Is it just balancing for these final seconds? 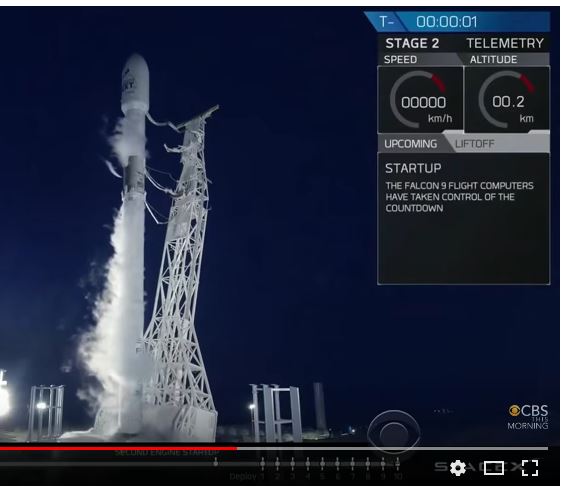 Good answers are being generated, but the fine point is for a large vertical stack, what is it resting on? The main outer shell of the first stage? The engine nozzels are unobstructed, I assume...

The Transport Erector Launcher (TEL) is used to assemble the rocket in the assembly building, then driven out to the launch pad (The Transport part), then when it is time to launch, hyrdraulic arms lift it up to vertical. (The Erector part).

Then at launch time, it moves away, differing amounts/time lines depending on the pad and version of the TEL. (Vandenberg's is different than LC-39A's and LC-40's (which is a second rev since the first one was toasted in the AMOS explosion)).

At the base, there are hold down clamps. The engines actually start, and run for almost 3 seconds being held down by these clamps, and then finally they release letting the vehicle 'go'.

Hot fire tests, 8-15 seconds long use the hold down clamps as well, to keep the vehicle on the pad while running the engines up to full speed for a few seconds.

Jack in his answer shows the clamps and how they move in a very good animated GIF.

The Octaweb has hold down points, where these clamps attach. The Octaweb is the structure (Before Block 5 this was a large welded piece of metal (Aluminum I think) that the 9 engines are mounted/embedded into. As of Block 5 it is bolted for easier refurbishment and a more heat tolerant metal. 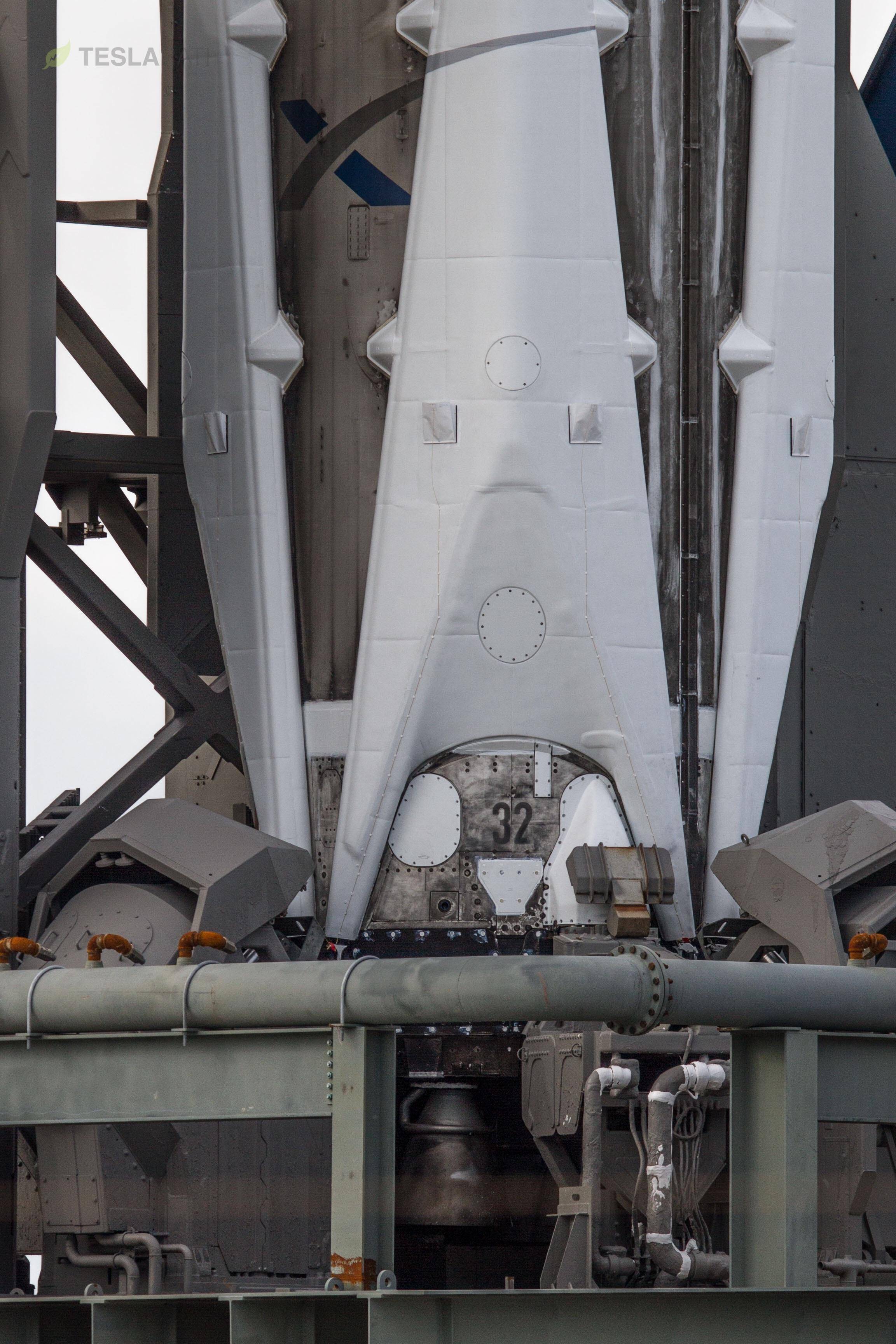 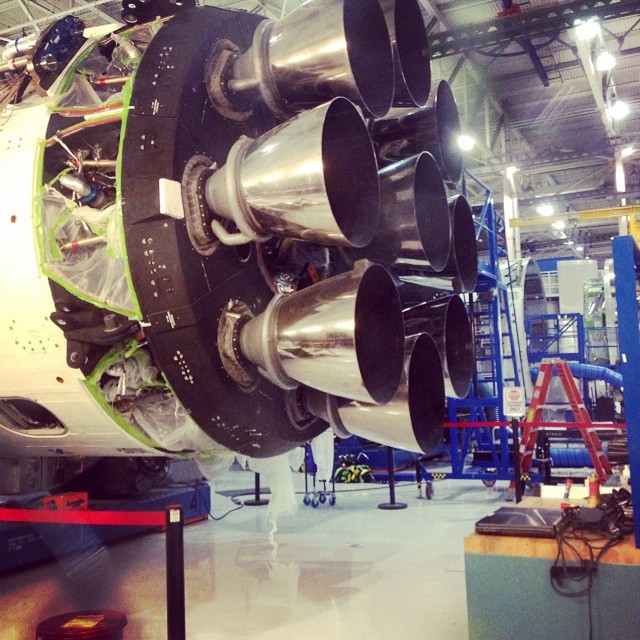 In the picture below you can see the launch table, with the clamps arranged for a Falcon 9 launch. (More are needed for F-Heavy). 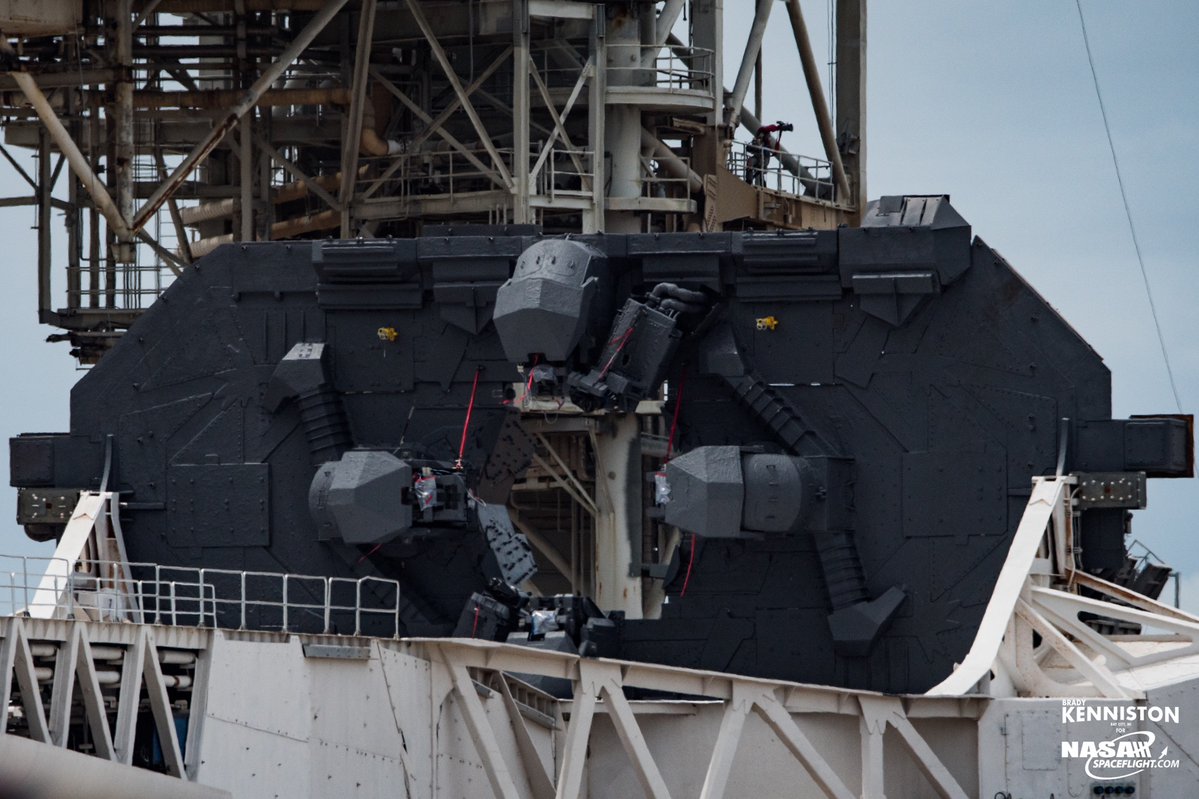 In this picture below you can see the underside of the launch table with the plugs in, blocking out where a Falcon Heavy might use the holes in the table. 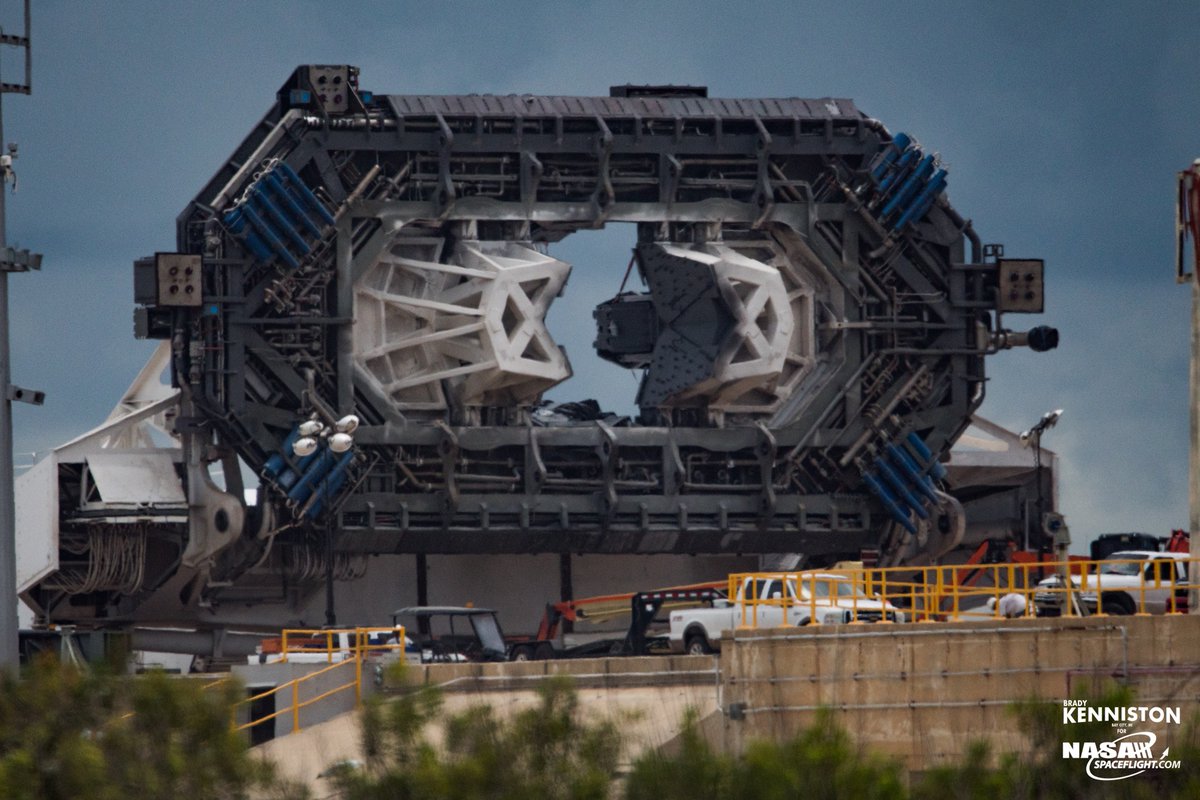 In the picture below, you can see the top of the launch table, with the plugs removed for the Falcon Heavy inaugural launch. You can see there are now more launch clamps, since three cores need to be held down. 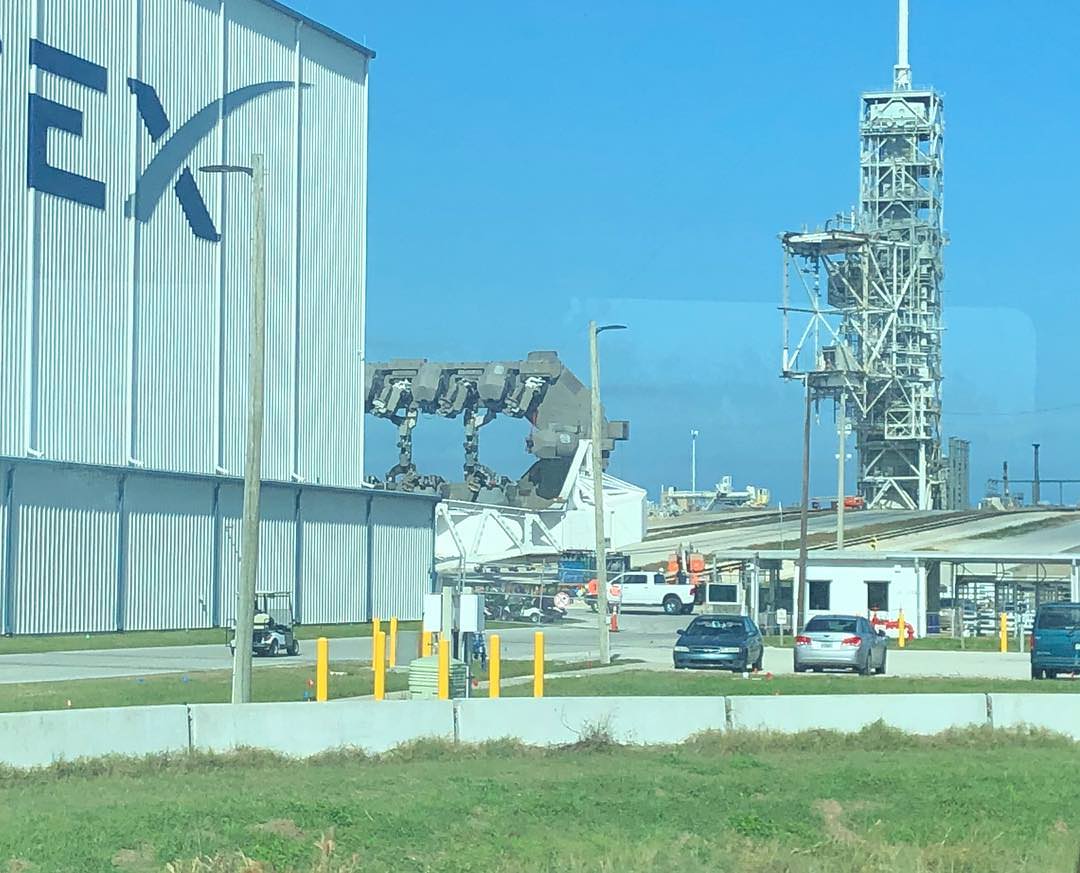 The Falcon 9 (and Falcon Heavy) use launch clamps at the base of the vehicle to hold it steady pre-launch. In fact, the gantry and umbilicals don't actually provide much support even before they retract - they're there primarily for power and fuel loading.

The launch clamps release soon after the engines reach nominal thrust and can support the vehicle's weight.

Edit: This question demonstrates that the launch clamps aren't quite as rigid as they may seem!

Many vehicles have used similar systems - the Saturn V for example used hold-down clamps that pivoted into covers to protect them from the engine exhaust. 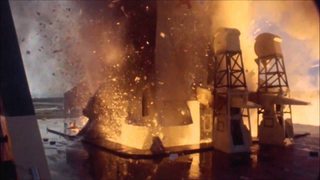 Note: The screengrab in the question appears to be from an Iridium NEXT mission, all of which have launched from VAFB, but SpaceX launches from KSC have similar systems

Not the answer you're looking for? Browse other questions tagged spacex launch falcon-9 tel or ask your own question.

0
Spacex rocket supporting mechanism on the launch pad
14
Why does the CRS-8 Falcon 9 rocket appear to be swaying before launch?
6
How are umbilical connectors held in place until their intended detachment?
7
Have any launch systems other than Saturn V used a controlled release?
6
Electron rocket holding & releasing mechanism

5
Who has built the largest number of Transport/Erector/Launch (TEL)?
6
If a rocket launch is delayed, what happens to the cryogenics?
7
What rocket launch protocols (if any) are in place to prevent premature or late intentional self-destruct?
5
What is this 'engine plume interaction'?
14
Why does the CRS-8 Falcon 9 rocket appear to be swaying before launch?
20
Why won't SpaceX launch a rocket for a month?
7
What are the falling parts in this ISRO rocket launch?
5
What caused launch abort on SpaceX's Bangabandhu-1 launch
7
What are these circular structures around the rocket?