What does the BackFlip lunar cycler do in its pass by Earth?

This paper describes an Earth-moon cycler orbit. In this concept, a 180 degree "BackFlip" is used to modify a more simple cycler orbit. However, I can't figure out what cycler orbit it modifies, and correspondingly, what this thing is doing on the Earth-return leg. 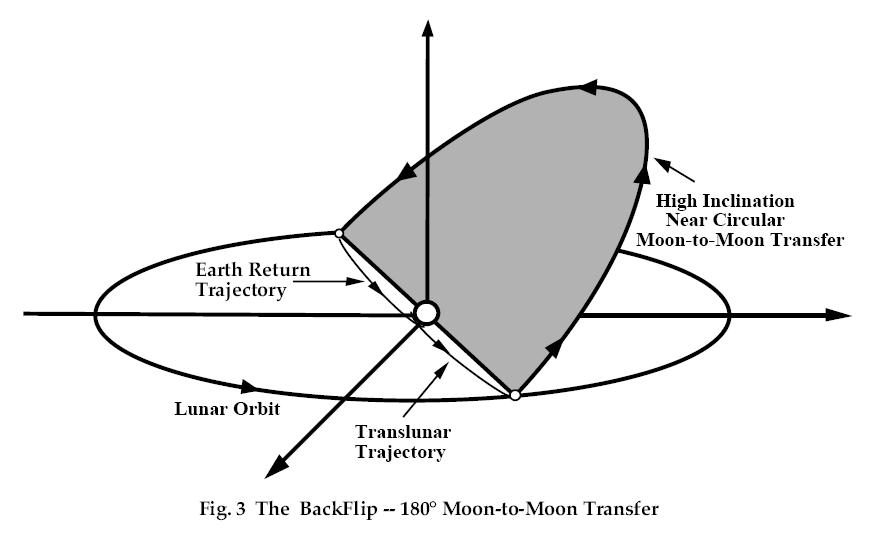 I think I understand the backflip itself, with the patched conic approximations. The highly elliptical orbit is aimed at the moon such that the hyperbolic pass redirects the velocity to that angle above the plane. So in terms of order, let's assume we start from "Translunar Trajectory" in the image:

By the time you reach apogee again, the moon will have moved on. And that's a really high apogee. It seems to defeat the point. This orbit should be repeatable indefinitely, and I don't see how it is.

The source of the idea is credited to Uphoff 1989. I tried to figure it out from that paper, but it doesn't really add much information which isn't in the other paper.

Page 10 of the article: "Earth-return trajectory that has a period of 1/2 month (or 1/3 month is some cases) in order to ensure return to the Moon after 2 (or 3) revolutions of the Cycler in its Earth-return orbit".

Those revolutions are not shown in the diagram; "Earth Return Trajectory" and "Translunar Trajectory" only show half of their respective orbits. After perigee with Earth, the Cycler makes 1 (or 2) highly elliptical orbits whose apogee is at lunar orbit, but with the Moon 180° (or 120°) out of phase. Then on the 2nd (or 3rd) apogee, the Cycler is in sync with the Moon again and may perform another BackFlip.

18
Can we set up an orbiting transporter between Earth and the Moon?
4
Is it possible to have a "figure-8" orbit around the Moon and the Earth, and perhaps always face the sun?
5
Is the Uphoff-Crouch cycler orbit with 3 passes impossible?
0
What's considered the boundary for "earth orbit?"

12
Could Earth-lunar flybys be repeated consecutively without the use of propellant?
39
What uses would the Aldrin-Cycler have?
5
Is the Uphoff-Crouch cycler orbit with 3 passes impossible?
18
Can we set up an orbiting transporter between Earth and the Moon?
8
Earth polar orbit to Lunar polar orbit
3
What does the term "libration point gateway" mean?
2
What does lunar dust smell like?
6
Why does the Buzz Aldrin Mars Cycler not play a larger role in planning for Mars exploration?
1
What is the minimum transfer time for Earth/Mars cycler and still remain balllistic?