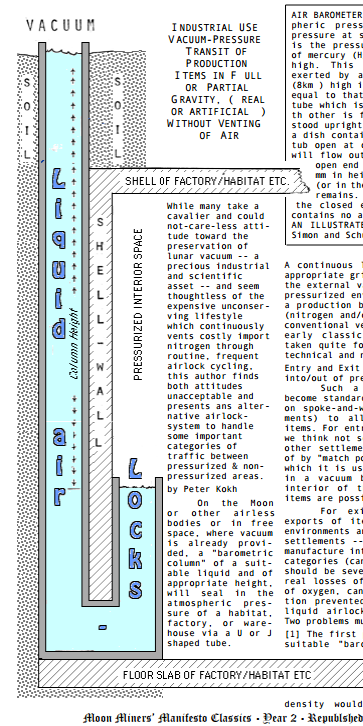 It is on page 32 of this issue from 1988. It posits this as an option in places with gravity, or simulated gravity on rotating space stations, and suggested 3 possible liquids that could be used: mercury, gallium, or a sodium-potassium alloy known as NaK.

Thinking about this, the only places I could really see this potentially working is on Mars or Titan, both of which have a thin atmosphere. Titan in particular might be of interest as its atmosphere could be explosive if combined with oxygen, and this would be an effective way to keep the oxygen away from Titan's atmosphere when performing an EVA.

There is an option that could work. Gallium is a relatively toxic free material. Its melting point is near room temperature, so it would be reasonable to survive going through it, although a human could very well have parts solidified to one's suit after passing through it, as they would freeze on it (Unless the suit was pre-warmed). It is a fairly expensive material, and the amount required to use for the space application would be quite large.

Not the answer you're looking for? Browse other questions tagged the-moon colonization technology habitat airlock or ask your own question.

12
How many airlocks does the ISS have?
3
Do we have the technology to make large rotating airlocks?
2
Could the Lunar Lagrange Points work for space telescopes?
2
Could an Igloo work on Mars?
13
Could a space colony 1g from the sun work?
5
How do these Apollo mission control displays work?
3
ISS: Airlocks between pressurized modules?