Apollo communication between the Earth and Moon

How was it possible for astronauts to send back tv/radio signals to earth from the moon? I have just been teaching my son about waves behavior and understand that radio waves are reflected back to earth from the ionosphere. As far as I know microwaves were not used for communication purposes back then. How did the Apollo team then manage to send TV/ Radio signals back from space?

It can be seen through this Wikipedia article that all communication with the Apollo missions was done at about 2.2 GHz, which is well above the frequency that reflects on the Ionosphere (No higher than about 30 MHz).

FYI, the Gemini radio system also used frequencies in the UHF range, although it included some VHF, and even some HF. The HF/ VHF signals were either used for voice communication, or nearby operations (Recovery, acquisition). HF was more used then than it is today, and allowed for somewhat of an over the horizon effect. Depending on propagation, it can be difficult, but the 15 MHz used has minimal interference.

Microwaves are considered those with a higher frequency than 300 MHz, so technically, they did use microwaves for the Apollo program. These signals work great to penetrate the atmosphere.

http://novosti-kosmonavtiki.ru/mag/2005/1045/24532/ image of the Earth rising above the lunar horizon, taken on a television channel from one of the Apollo, intercepted by the Soviet tracking station in Crimea ("Shkolnoye"). 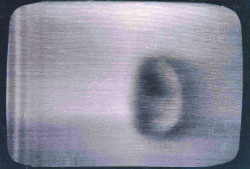 Not the answer you're looking for? Browse other questions tagged the-moon nasa apollo-program communication radio-communication or ask your own question.

7
Hijacked space data, notable instances of recovering images or other goodies from someone else's space mission?
5
What part of the Earth was visible to Apollo 8 when the Christmas message was broadcast in 1968?

16
Resilience to data transmission errors of the Juno spacecraft
8
Is long range radio communication possible on the lunar surface?
5
What's the closest that an Apollo mission passed GEO on its way to the moon?
7
What Soviet signals (if any) attempted to scramble communication and sabotage Apollo missions?
1
Chandrayaan-2 orbiter and lander communications with Earth (IDSN)
11
What was the temperature of the Apollo 11 moon landing zone?
4
What was the transmitting power of the Apollo astronauts' PLSS VHF radio transmitters?
7
Encryption in radio system
6
How (the heck) was coherent synthetic aperture radar (SAR) implemented using photographic emulsion aboard Apollo 17?
5
How do the small radio receivers on space probes catch enough of a signal to communicate with us?