Have any space stations experienced a total solar eclipse?

Have any space stations experienced a total solar eclipse [edit: with the moon blocking out the sun, and seen from the vicinity of the Earth *sigh*]? Otherwise, will any manned satellites pass through one in the foreseeable future?

If not, are there any real video clips shot from space of a satellite or spacecraft moving into or out of totality, showing the moon's shadow moving on the limb of the Earth, and even better, with the sun and moon in the frame?

All I could find is a partial one from the ISS: http://time.com/4908629/total-solar-eclipse-international-space-station/

Although not really a "space station," the crew inside the Gemini XXII spacecraft capsule (James A. Lovell, Jr., and Edwin E. "Buzz" Aldrin, Jr.) witnessed a total solar eclipse in November of 1966 (Gemini 12).

Although the pilots missed the ride to high altitude, Lunney soon found something for them to do with their spare time. The flight plan had originally called for them to photograph a solar eclipse, if it did not conflict with the rest of the mission. This task fell by the wayside when the two-day launch delay - from 9 to 11 November - meant that the eclipse would occur during their high-altitude excursion. Canceling the main engine burn inspired two of the mission planners to thoughts of reinstating the eclipse photography. Schneider and Lunney conferred with James R. Bates, Experiments Advisory Officer for Gemini XII, on the effect this might have on the rest of the experiments. Since the flight plan had to be changed anyway, Bates said, why not include the eclipse?

This conference with Bates marked a significant change in mission control operations. Formerly working out of an adjacent staff support room, the experimenters' representative was now allowed by the engineers in charge to operate as a part of the flight control team in the main control room. Although there had been an experiments console in the control room by Gemini X, it had been only occasionally manned. Bates, on Gemini XII, was the first full-time experiments officer. This experience worked out so well that the custom was continued in Apollo.

Even after the eclipse became a flight-plan casualty, planners continued to plot its path. Now there was a chance to work this experiment back into the mission. The Agena's secondary propulsion system had enough power to get the spacecraft into position for an eight-second photographic pass at the proper time. Schneider and Lunney agreed that this piece of realtime planning would give an added fillip to the mission.

"The eclipse got to us after all," Lovell remarked. "Yes, it looks like it," Conrad answered. Although the crew had wanted to do the experiment when it was first planned, these sudden preparations came at an inconvenient time. They were still working with the Agena and were scheduled to begin such activities as eating, sleeping, and working on other experiments.

Nevertheless, at 7:05 hours after launch, Jim Lovell fired the Agena's smaller engines to slow his speed 13 meters per second. Agena still had its doubters - Conrad had told them, "If It gets away from . . . take it over with the (spacecraft)." But the target vehicle performed splendidly, and the crew then bedded down for the night.

The Canary Island controller greeted the crew in the morning with the news that there would be a second maneuver - 5 meters forward - to line the vehicles up properly. The prospects panned out richly, and the crew reported seeing the eclipse "right on the money at 16:01:44 g.e.t." The path of the eclipse cut a swath across South America from north of Lima, Peru, nearly to the southernmost tip of Brazil. Although they thought for a moment, they were slightly off track, their aim had been accurate.

Interestingly, Jim Lovell's oral description of the event (as can be seen on disc 3 of Project Gemini: A Bold Leap Forward) coincides closely with my own recollections of totality (having witnessed same on 21 August, 2017, in Central City, Nebraska, USA). However, I'm sure it went by much more quickly for the Gemini XXII crew than it did for me... 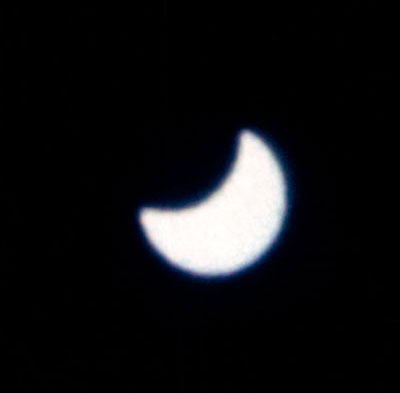 Partial solar eclipse as seen from the Gemini XII spacecraft during it 12th orbit around Earth. Crew members for the flight were astronauts James A. Lovell Jr., command pilot, and Edwin E. Aldrin Jr., pilot. NASA

On November 11, 1966, Aldrin and fellow astronaut Jim Lovell had just arrived in orbit in Gemini XII. At the last minute, NASA asked the astronauts to make a slight orbital maneuver to put themselves into a position over the Galapagos Islands, where they caught a brief glimpse of totality. That total solar eclipse was also observed on the ground in Peru and Brazil.

So just 16 hours into their mission, during the spacecraft's 12th orbit around Earth, Aldrin and Lovell saw an eight-second eclipse. Lovell reported seeing it “right on the money at 16:01:44” according to NASA. He photographed totality, as well as a partial phase.

Not the answer you're looking for? Browse other questions tagged artificial-satellite crewed-spaceflight space-station solar-eclipse or ask your own question.

2
Seeing stars from cislunar space?
1
Did anybody on the ISS photograph this partial eclipse? How long did it last? How did they safely photograph it?

15
How big of a problem is the Lunar eclipse in April 2014 for LADEE?
17
The Moon's shadow could not possibly look like this — could it?
8
What are the "Moon L, B, C" angles shown in this solar eclipse simulation?
9
How does a solar eclipse affect satellites?
6
Can satellites or the ISS be seen from Earth during a Total Solar Eclipse?
4
Has the Moon's shadow on the Earth (solar eclipse umbra) ever been photographed from beyond Earth orbit?
5
Where to look for newest images from Chang'e 3?
8
Has the Earth's shadow on the Moon (lunar eclipse) ever been photographed from Space?
4
Plot of the thermally-induced tilt in Martian surface during solar eclipse by Phobos? (slope of 1 atom per meter?)