Why is a near rectilinear halo orbit proposed for LOP-G (formerly known as Deep Space Gateway?)

Why is a near rectilinear halo orbit a good place for a Lunar Orbital Platform-Gateway (formerly known as Deep Space Gateway)? Are there specific logistical and orbital-mechanical advantages over other possible orbits in cis-lunar space; other Lagrange point associated orbits or even high or elliptical lunar orbits for example?

The Deep Space Gateway would be initially placed in a near rectilinear halo orbit (NRHO) around the Moon.

In fact, they are the preferred option among other staging orbits by analizing multiple factors:

A study considering NASA SLS and Orion performances was carried out. Since SLS places Orion in a trans-lunar trajectory, Orion vehicle has to carried out orbital maneuvers to reach a orbit near the Moon, so the limiting factor will Orion's propellant load limitations. These makes difficult to access low-lunar orbits since an estimated budget of $\Delta V$=1250 m/s has to be enough for entering and leaving the orbit.

Analyzing the previous constraint, although for some epochs moon keplerian orbits were affordable, they were discarded because they were problemtic for continuous access. This reduces the candidates to orbits within the Restricted 3-Body Model: nominal L1/L2 halos (637-811 m/s), near-rectilinear halo orbit (NRO) (751-840 m/s) and distant retrograde orbit (DRO) (841-957 m/s). 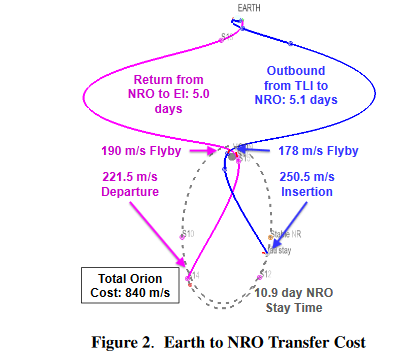 This metric only measured transfer of the lander located at the staging orbit to a low lunar orbit (LLO) (the cost of descending and ascending from Moon surface to the LLO is assumed constant). Also, transfer time should be reasonable for the crew.

Obviously with this consideration, the preferred staging orbits would be keplerian orbits near the Moon, but they were discarded by Earth-access. It is not difficult to see that between the 3-Body Model orbits candidates the NRO provides the best metric by terms of $\Delta V$ and time, if a polar LLO is chosen (note that polar orbits guarantees global surface access waiting the required amount of time).

Considering station-keeping, for all the analyzed orbits, \Delta V budget per year was affordable (<10 m/s), so this was not a determinant factor.

When taking into account communications to Earth, 3-body problem orbits got another point for that since a direct line-of-sight with Earth is all time available. Communications with the Moon where most favourable (at percentage) with NRO and L2 orbits, althought they favored one pole or one side.

Another preliminary analysis was done with thermal environment which also favored 3-body problem orbits, but it was not conclusive at all.

Staging orbit access from Earth with the Orion module discarded all the Moon Keplerian orbits. Among the considered 3-body problem orbits, the option that got most points was the NRO orbit. 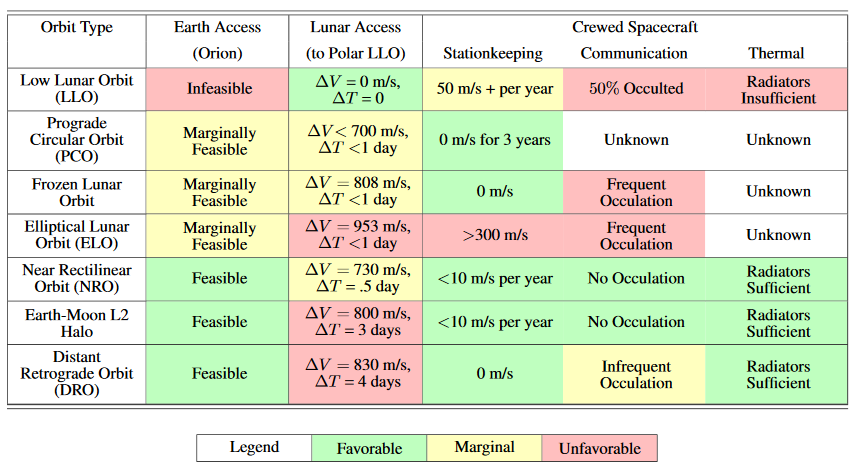 My answer is entirely based on this nice paper about the subject: https://ntrs.nasa.gov/archive/nasa/casi.ntrs.nasa.gov/20150019648.pdf

Not the answer you're looking for? Browse other questions tagged orbital-mechanics halo-orbit cislunar lunar-orbit lunar-gateway or ask your own question.

19
What artificial satellite has the farthest orbit around the Earth?
15
What is a near rectilinear halo orbit?
8
What is the current state of commercial space stations?
8
How does a butterfly orbit move in 3D? Way to generate or visualize?
7
Do Lagrangian points apply to eccentric orbits or binary systems?
6
Is the Gateway's halo orbit bound to Earth? Would the Gateway remain in Earth orbit if the Moon disappeared?
5
LOPG/Deep Space Gateway - What is a cislunar orbit?
6
Aspects of "true deep space environment" on Gateway not thoroughly explored by decades of habitation of nine space stations already?
4
Can mascons have Lagrange-like points? In principle? At the Moon?
4
How much delta-v does it take to get from a Lunar Transfer Orbit to a Near Rectilinear Halo Orbit around the moon
See more linked questions

15
What is a near rectilinear halo orbit?
5
LOPG/Deep Space Gateway - What is a cislunar orbit?
4
How will the Lunar Gateway go to L2 and L1; how much delta-v is needed?
5
How do I calculate the characteristic energy for a rocket to near rectilinear halo orbit where the Deep Space Gateway is going to orbit the Moon?
6
Is the Gateway's halo orbit bound to Earth? Would the Gateway remain in Earth orbit if the Moon disappeared?
8
How does a butterfly orbit move in 3D? Way to generate or visualize?
1
Could there be a relatively stable near-rectilinear halo orbit associated with the Sun-Earth L1 or L2 points? Would the Moon screw it up?
4
Can mascons have Lagrange-like points? In principle? At the Moon?