Why did they think that S509356 was in orbit around the Earth? Where is the disconnect?

This answer suggests that the object S509356 could potentially be a candidate for being called a "mini-moon", an object which temporarily becomes gravitationally bound to the Earth and enters into Earth orbit. This happens because our massive moon can "pull" on things in heliocentric orbit enough to get them to spend some time in the Earth-Moon system.

The object is noted in Wikipedia's article Claimed moons of Earth:

On April 8, 2016, an object, named S509356, was discovered with an orbital period of 3.58 days. Although it has the typical area-to-mass ratio (m^2/kg) of satellites, it has a color typical of S-type asteroids. It has not yet been identified with any known artificial satellites, because there are no known satellites currently orbiting Earth in between 2.99 and 3.79 days.

and its (potential) temporary Earth orbit is discussed in the Reddit post Mystery object S509356 spotted in strange orbit. Discussion there links to a note in Jonathan's Space Report:

Asteroid surveys have spotted an unknown Earth satellite, provisionally designated S509356, in a 30000 x 152000 km x 48 deg orbit. Looking at my historical lists, it might be an object associated with the Vela launches, although it's surprising it's only being spotted now. The region beyond GEO is poorly tracked by satellite surveillance systems but in recent years coverage by asteroid searchers has been fairly good.

I looked in JPL's Horizons to check the orbit, but was surprised to see that the object in that database named 509356 never gets closer than 200 million km from Earth in the year 2016 I've plotted the 2016 data for Earth and the object below (dot is January 1st) and it's clearly not something that could be mistaken as having a 3 or 4 day orbit around the Earth. Those units are kilometers.

Where is the disconnect here? An asteroid that far from Earth would never be mistaken as being in orbit around the Earth because it would move orders of magnitude too slowly.

Does it have anything to do with this? 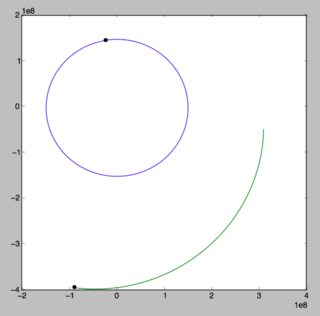 It was later identified* as an upper stage for a Chinese launch, so the provisional identifier didn't get turned into a solar system body, which might explain why you can't find it in Horizons.

It has a ground track that looks a bit like a captains sleeve insignia.

The 509356 in the JPL Small Body Database used by HORIZONS is not the same body as the S509356 you mention. Searching the JPL database (https://ssd.jpl.nasa.gov/sbdb.cgi) gives us details on 509356, a main-belt asteroid discovered in 2006. 509356 is a permanent designation given by the IAU Minor Planet Centre (MPC) to this body as it is considered a minor planet.

S509356 is as far as I can tell currently considered a distant artificial satellite by the IAU MPC, as it can be found on the page here: https://minorplanetcenter.net/iau/artsats/artsats.html. As such, it would not be included in the JPL Small Body Database and doesn't show up in your search of HORIZONS.

Not the answer you're looking for? Browse other questions tagged near-earth-asteroid or ask your own question.

37
What kind of orbit makes this wave shaped ground track?
9
Have there been any documented mini-moons since 2006 RH120?

4
What (actually) is a 1:1 resonance, and is 2016 HO3 in one with the Earth?
4
How will OSIRIS-REx scan and characterise the near-earth asteroid Bennu?
2
Here it comes! 2012 TC4 has been re-acquired and its orbit revised; at over 50 million km, how was this done?
3
How will NEA Scout control its attitude during deep space flight & keep its camera steady without vibrations or damage to its 85 m² solar sail?