Is the Parker Solar Probe's semimajor axis being so close to that of Mercury's just coincidence? Does it help somehow?

Parker Solar Probe will end up in it's Sun-kissing orbit though a series of Venus flyby's, which roughly pins Parker's aphelion at Venus's semimajor axis or about 108 million km. Its final perihelion will be about 6.6 million km, making its semimajor axis 114.6/2 or about 57.3 million km.

Is this just a manefestation of Bode's law (humorous reference to serendipity) or will it in any way be helpful to stabilize Parker's orbit, or be unhelpful?

fyi Horizons now has a projected orbit for Parker that goes out to 2025-Aug-31 so I've plotted the Sun, Mercury, Venus, Earth, and Parker in a frame rotating steadily with Mercury's period. You can see Mercury's actual path is a big loop because it's quite elliptical.

The lower plot stars 2024-Jan-01 and you can see that it moves into what has the appearance of a resonant orbit with Venus. It may not really be resonant if there's no gravitational effect doing this, coincident parallel motion is not a true physical resonance, which happens when there is a causative exchange of energy.

It can be verified that those three or four very tight, repeating orbits begin in November 2024 after the last Venus flyby. 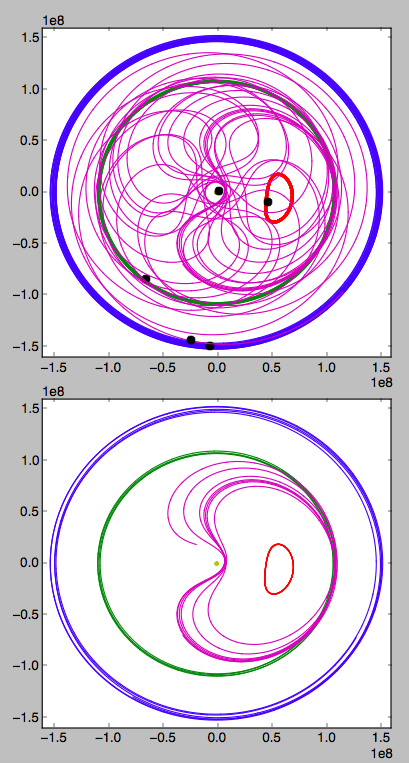 The semi-major must be >54.5 million km (and even that is too hot), as the aphelion must touch the orbit of Venus to enjoy the repeated gravity assists to reach this orbit, and the perihelion must be outside the sun. So ~57 million km is right were the trajectory constraints would demand the probe be located even before one gives any consideration to Mercury.

The Parker Solar Probe has no obvious stability requirements. It just needs to get close to the Sun, and other than that it has no strong location dependencies other than not smashing into Mercury, which is trivial.

Not the answer you're looking for? Browse other questions tagged orbital-mechanics physics parker-solar-probe orbital-resonance or ask your own question.

2
How exactly to use astroquery.jplhorizons to get the state vectors of Mercury and the Parker Solar Probe?