How is the periscope port on Soyuz spacecraft secured for the atmospheric reentry?

Soyuz Backup Periscope (ВСК-4) is used in Soyuz spacecraft to align itself for orbital corrections, deorbit burn, and rendezvous with the International Space Station. Here is a cute closeup photograph of one such unit: 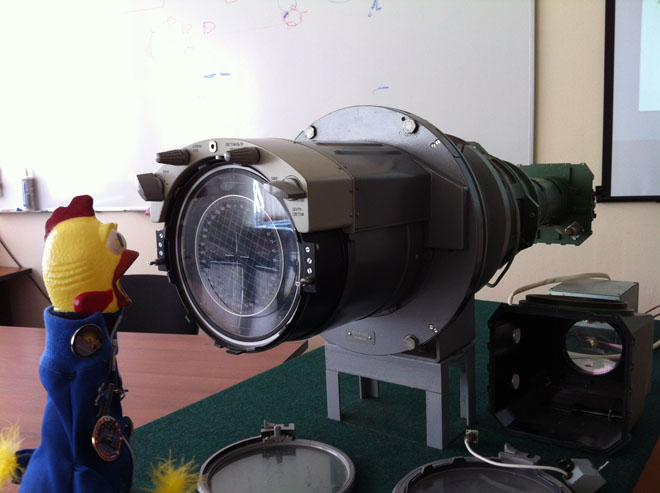 And its function is nicely explained by ESA astronaut Samantha Cristoforetti in one of her logbook entries on Google+:

Most of the time the view of interest is the one "straight out" along the axis of the periscope. Whenever there is a need to fire the engines, the reference orientation in which the Soyuz puts itself is along the local vertical: in this orientation the periscope faces towards Earth. The optical setup is such that the commander sitting in the center seat will see the entire globe symmetrically in the field of view if the Soyuz is properly oriented. Also, any feature on the surface of the Earth will be running from top to bottom (or from bottom to top if it's a braking attitude).

When we approach the Station for rendez-vous the mirror is turned so that the commander can now have a forward view. This is the view we would use to align the Soyuz manually if we had to fly a manual docking. 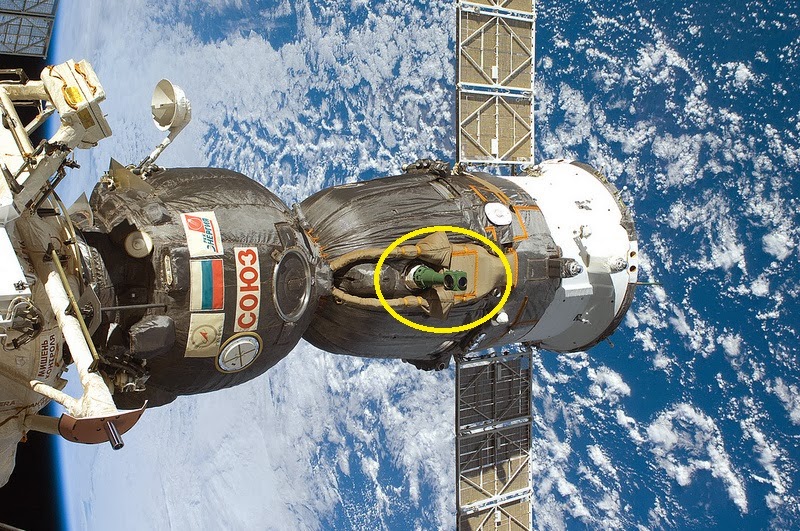 But this periscope is a part of the landing module (the middle section of the Soyuz vehicle) and the periscope doesn't seem to retract into the module at all, so...

Is this Soyuz Backup Periscope (ВСК-4) disposed of after the deorbit burn and before the atmospheric reentry, when the crew landing module separates from utility and instrument-assembly modules of the Soyuz spacecraft, and if it is, how is the remaining gap in the landing module's external hull sealed / secured to thermally insulate the capsule for the reentry?

Regarding the jettisoning of the periscope check out this simulation in the video explaining Soyuz reentry sequence at 9:40.

You'll notice the periscope being jettisoned at the same time the spacecraft propulsion and orbital modules separate from the landing capsule.

I think what left is just a small window of heatproof transparent material. In the same video @11:40 you can see the main windows are not covered during re-entry, so it is not a problem. The plasma just burns the outside layer of the window.

Not the answer you're looking for? Browse other questions tagged crewed-spaceflight reentry safety soyuz-spacecraft or ask your own question.

7
Soyuz has a Space Periscope?
10
Is there an equivalent of the Dragon 'claw' and Apollo umbilical fairing between the Soyuz crew and service modules?

14
Has any spacecraft had a way for the crew to escape during reentry?
5
How are ultra-sensitive aerogel suspended samples secured for Earth reentry and touchdown?
7
How are soyuz spacecraft adapted to 2 people crew?
14
Can Soyuz spacecraft operate without the orbital module?
6
How do orbital spacecraft calculate reentry?
3
Soyuz/spacecraft deceleration speed for reentry
3
Did the Apollo Command module really "skip" within, or off of the atmosphere as a part of its reentry program?
3
Soyuz: Do you know the coefficient drag and lift to drag ratio are during reentry?