Will NASA put astronauts into a polar lunar orbit? If so, how?

and the administration is working with NASA to put together a plan to get Americans back on the Moon in 2024.

The target landing site will be at the Moon's south pole, so a trajectory similar to the relatively planar Apollo era free-return-like trajectories can't be used.

Does there exist a slightly modified free-return-like trajectory that includes a polar fly-over, or will the likely orbit involve some kind of substantial plane change maneuver? Or will it be something else entirely?

Are there any other spacecraft trajectories from Earth to a lunar polar orbit that can be used for comparison?

Will NASA put astronauts into a polar lunar orbit?

Yes, but it's a bit complicated.

The current plan is not for an Apollo-like launch from Earth orbit to Lunar orbit, culminating in a landing descent from that orbit.

Instead, the plan is to launch a crew from Earth on the Space Launch System to the Lunar Gateway, a mini-space station of sorts, which will be in a "near-rectilinear halo orbit."

Since the landing is planned to be at the south pole that orbit will necessarily be polar, but it will transfer there from the halo orbit of the Gateway, not from Earth. 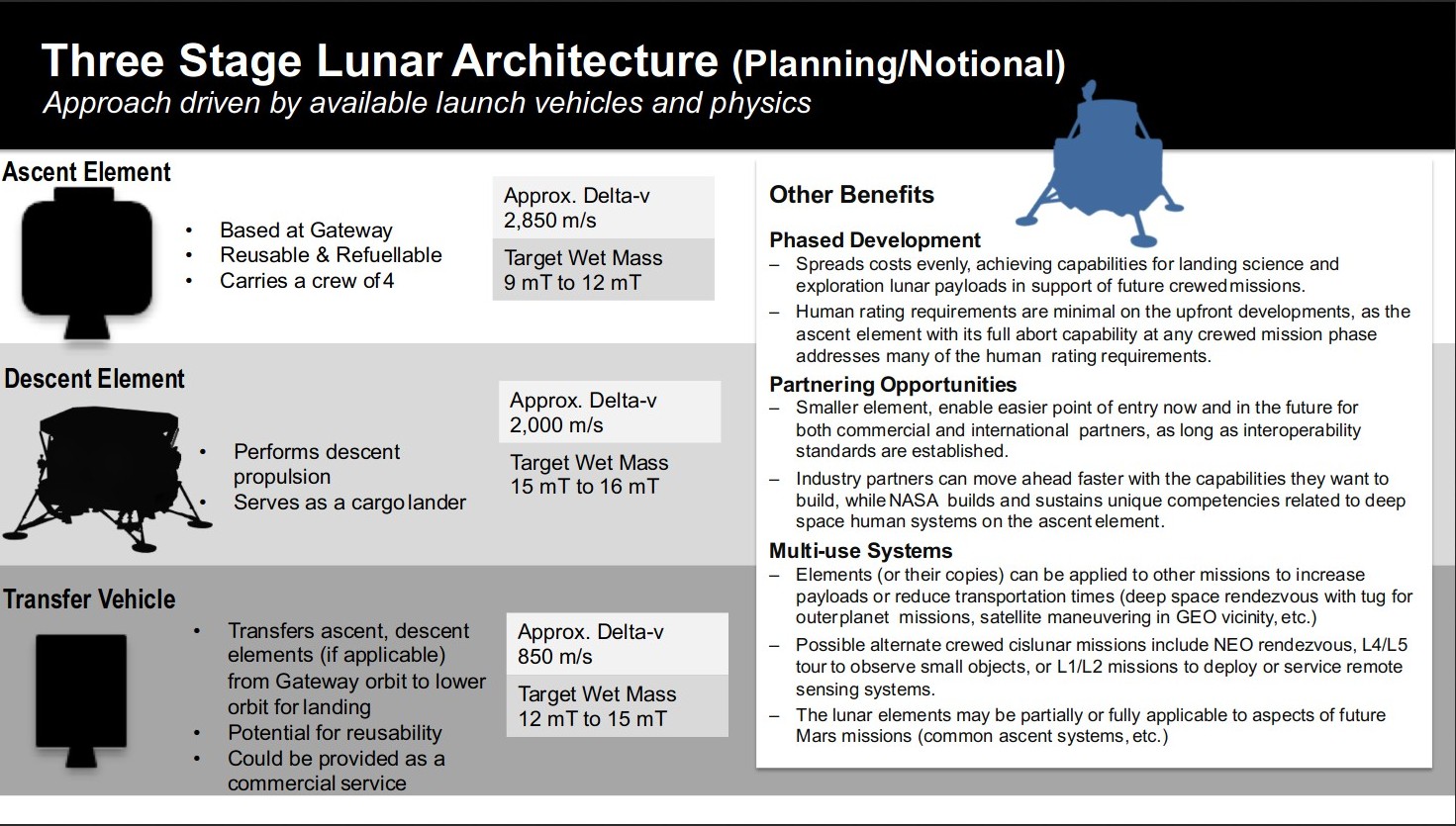 I write this answer largely to try and clear up apparent misconceptions about what is planned, in the question itself and the other answer, not because I have any detailed knowledge of the orbits involved.

In terms of the question "do there exist a slightly modified free-return trajectory..." I don't know (I know that's a weird way to start an answer, but bear with me). Getting to Lunar Polar orbit is not made any easier by starting in Earth polar orbit, that is overkill.

You basically need to fly over the poles of the moon. Given the moon's size and distance, this means that it can be achieved with a relatively low inclination Earth orbit, something probably less than a few degrees inclined with respect to the moon's orbit, probably lower. It's all about angles - the moon's angular size is small, and the distance is large, so if you are inclined just a little bit, then over the distance to the moon your orbit will go over the poles.

Performing a plane change in orbit is prohibitively expensive no matter which body you are orbiting. To change just a few degrees in low Earth orbit would take several hundred m/s of delta v. To change from equatorial to polar in a lunar orbit would be insane (I can't find a good number, but there is an equation here. You'll probably find that the vast majority of the delta-v budget of a mission would be taken up by the plane change.

NASA has studied such orbits extensively, since mapping satellites are best placed in such orbits in order to get as much surface coverage as possible. Here is a NASA trajectory study of this very thing - low energy transfers.

Whether a free-return polar trajectory exists or not is an interesting question. I strongly suspect not, but I'm happy to be proven wrong here. Free-return in the sense of return to the surface without expending fuel would require a small gravitational assist from the moon, which is not possible for a purely polar orbit. Perhaps a slightly less-than-polar orbit, where some small in-plane velocity change can occur, is possible, so don't quote me on the impossibility of such an orbit yet.

Not the answer you're looking for? Browse other questions tagged orbital-mechanics the-moon nasa artemis-program or ask your own question.

15
What is a near rectilinear halo orbit?
8
How many stages (approximately) will likely be used to get NASA astronauts to the Moon's south pole and safely back to Earth?

9
Why does NASA plan to put a meteoroid in Lunar orbit instead of Earth orbit?
2
Lunar Polar Orbit
4
How does Exploration Mission 1 orbit differ from Apollo-era free-return? How far from Earth (and Moon) does it go?
8
Earth polar orbit to Lunar polar orbit
8
Has NASA "gone south"? Why are astronauts needed to explore the Moon's south pole?
0
What is the connection (if any) between the new Artemis mission and the two Artemis spacecraft (Themis-B, -C)?
26
How many petaflops does it take to land on the moon? What does Artemis need with an Aitken?
2
Origin, artist, and original purpose of this unusual NASA image from 1996 or earlier? (possibly related to Clementine)
5
What is the relationship (if any) between NASA's Kilopower project and its request for 40 kW reactor designs?