History of investigation of lunar and Martian surface gravity

I wonder when it was discovered that the Moon has about a sixth of the Earth's surface gravity and that Mars has 0.38 g. I think that until Newton, everyone assumed there was the same gravity on every celestial body, the same as the Earth's. But did Newton already calculate the Moon's gravity to be about a sixth that of Earth?

Did the first flyby and impactor probes on the Moon (like Lunnik 1, 2, 3 and Ranger 7) take into account the different surface gravity around 0.166 g? Same question for Mars. I suppose they must have known the Moon's and Mars' gravity more precisely and taken them into account, otherwise it would have been too risky to send the probes there.

When was the Moon's and Mars' surface gravity calculated first and when were they measured first, and how precise were the first calculations and measurements?

Before the space age, the orbit diameter of the Marsian moons as well as the diameter of Mars could be estimated using telescopes from Earth only. The precision of those measurements was limited by the huge distance between Earth and Mars.

The orbital period of a small moon is:

Solving the equation for planets mass:

The surface gravity of a celestial body is:

A small Python script to calculate Marsian mass and gravity from the moons orbital data:

This technique was used by Dutch astronomers in 1927 to estimate the mass of Mars to an accuracy of 0.2%. This remarkable result requires an accuracy of only 0.067 % for the orbital radius. For the radius of 23459 km it is only +- 15 km. 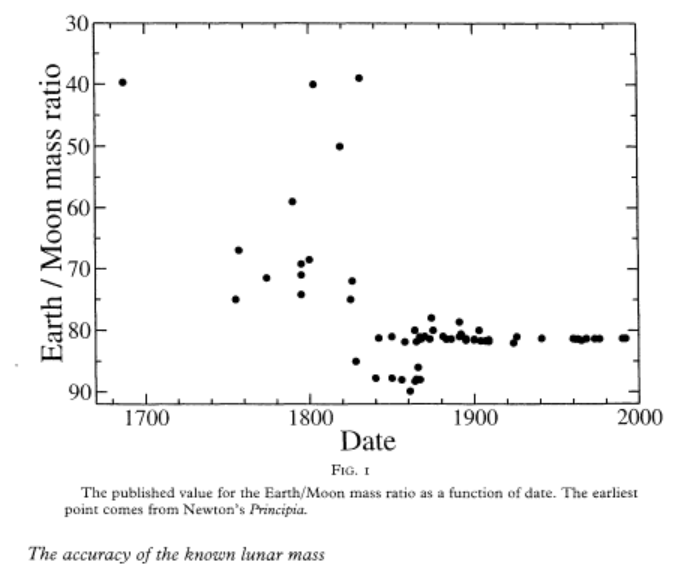 In 1940 a very accurate value was published, only small improvements between 1960 and 2000. Figure from Measuring the Moon's Mass.

So gravity of Moon and Mars could be estimated decades before the space age but with very limited precison.

In 1776, Laplace formulated a single set of linear partial differential equations, for tidal flow described as a barotropic two-dimensional sheet flow. Coriolis effects are introduced as well as lateral forcing by gravity. Laplace obtained these equations by simplifying the fluid dynamic equations. But they can also be derived from energy integrals via Lagrange's equation.

For a fluid sheet of average thickness D, the vertical tidal elevation ζ, as well as the horizontal velocity components u and v (in the latitude φ and longitude λ directions, respectively) satisfy Laplace's tidal equations46...

46The Laplace Tidal Equations andAtmospheric Tides by David A. Randall.

But did Newton already calculate the Moon's gravity to be about a sixth that of Earth?

He makes a similar claim earlier (proposition VII corollary 3: "The Moon is denser than the Earth, as shall appear afterwards."). But he was wrong; the average density of the Moon is 3346 kg/m$^3$ and of the Earth 5515 kg/m$^3$.

Finally, in corollary 5, he compared the surface acceleration due to gravity:

The actual value is about 1/6, not 1/3. However, considering that all of Newton's calculations derived from observations using telescopes of his day, it's not too bad of an approximation.

According to an article in the NASA ADS journal, Measuring The Moon's Mass:

In 1900, the size and distance of the moon was determined to high accuracy, which combined with the mass gave a good estimate of lunar surface gravity.

This answer is really a long comment: it doesn't answer the question as such, but rather tells you some ways you probably can't measure the mass of the Moon in particular, but with an interesting corollary.

One tempting thing is to say: well, the Moon's gravity should alter $g$ on Earth: can we measure that? Well, let's assume that the Moon and the Earth are spherically-symmetric (this is going to be a big problem) and see what the variation is. Well:

And then the interesting thing to calculate is

Which tells you how accurately you need to measure $g$ to be able to detect the Moon.

Well, if you do this calculation you get $\Delta g / g \approx 6.7\times 10^{-6}$: you'd have to be able to measure $g$ to a few parts per million to be able to see the Moon's influence at all, and much better than that to get any reasonable estimate for the mass of the Moon.

But, but. Could you even detect the Moon was there this way? One approach would be to have some device which measured $g$, over long periods of time, and then see if you could see periodic changes in $g$ which corresponded to the Moon.

Well, such a device is called a clock: a pendulum clock is sensitive to $g$, and if you made a really good pendulum clock would it 'hear' the Moon? The answer is yes, it would. And in 1986 someone called Boucheron did this experiment: they recorded the timekeeping of a very good pendulum clock (Shortt number 41) for almost a year and it was then analysed, first by Boucheron and then later by Philip Woodward. And if you look at the frequency spectrum of the clock you can see, very clearly, a number of spikes which correspond to the Sun and the Moon.

Unfortunately there are two problems with this wonderful experiment:

This experiment is reported in My own right time by Philip Woodward, which has references to the original papers (which I have not read).

Not the answer you're looking for? Browse other questions tagged mars the-moon history gravity historical-data or ask your own question.

0
How deep a crater could an impactor spacecraft cause on Mars?
15
How easy is it to take off from the Moon?
1
Would a debris field on Mars look like one on either the Earth or the Moon?
4
What did JPL's 1939 lunar lander look like and what practical aspects of landing on the Moon did this engineering design address?
14
At what surface gravity can't astronauts do full steps anymore?
3
When calculating the future orbit of an artificial Earth satellite, is the Moon's gravity significant or insignificant?
33
Why did multiple nations decide to launch Mars projects at exactly the same time?
8
What does the Moon's gravity feel like? If you don't move, could you still tell you're on the Moon?