This topic: What G-forces do different launchers cause? indicates that current satellite launchers are limiting peak acceleration to about 4g. I'm pretty sure the STS (Shuttle) did the same. My recollection from the Apollo days is that they threw 6g and 8g figures around for peak launch accelerations, or possibly peak re-entry forces.

The Apollo 11 AS-506 launcher flight report contains a nice graph of the G-force curve of that famous Saturn V launch: 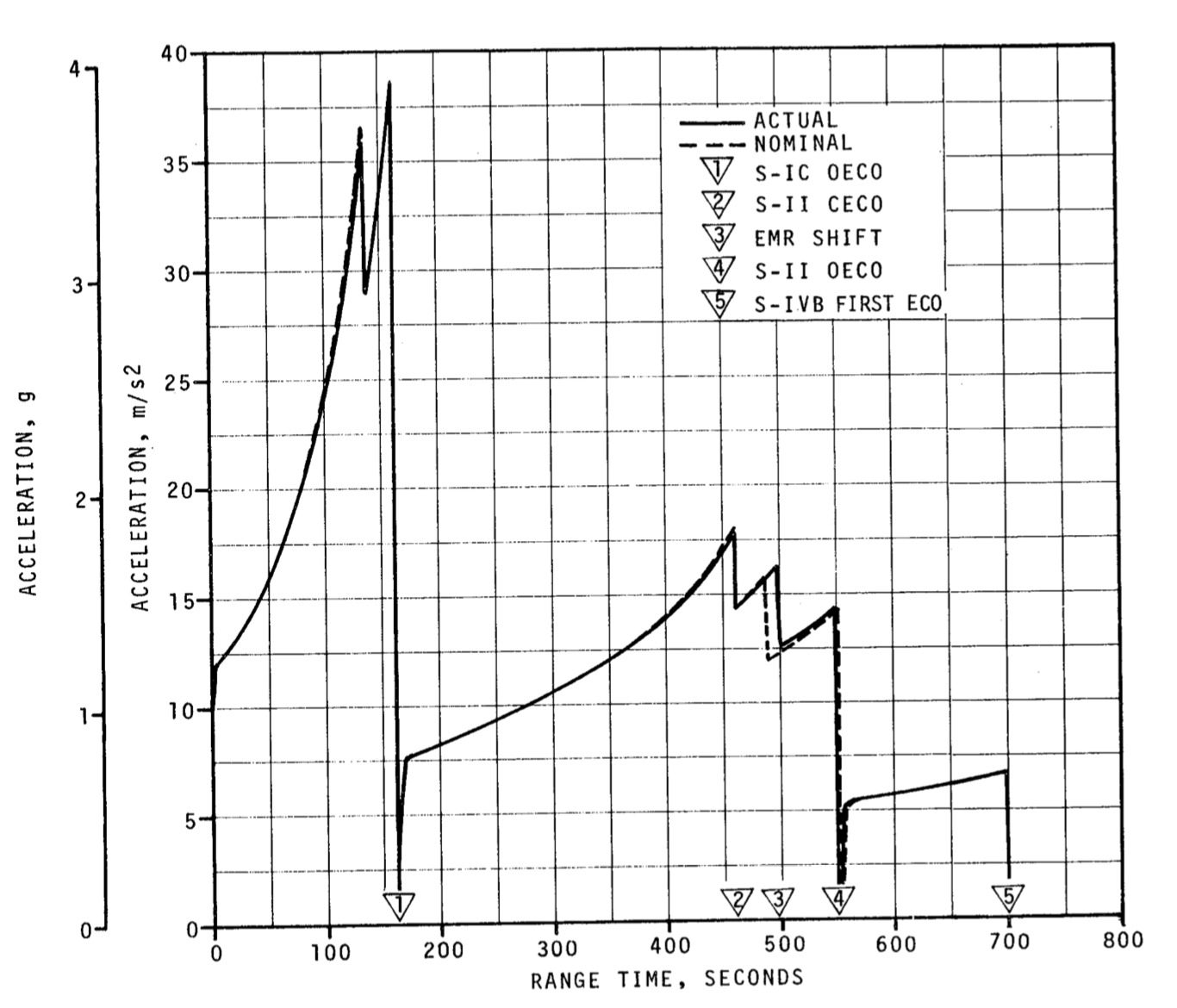 From this chart you can see that, off the pad, the Saturn V first stage is doing about 1.2g; this climbs rapidly as atmospheric drag falls and fuel mass is consumed. The center engine is intentionally shut down to limit acceleration, and the outboard four keep pushing to a max of about 3.9g. This is the highest acceleration in the mission until re-entry and landing.

The upper stages are less dramatic in their acceleration but follow similar increasing curves; the second stage curve steps down once for the center engine cutoff and once again when the fuel-to-oxidizer ratio is switched ("EMR Shift" on the graph, for Engine Mixture Ratio) -- this is done to optimize Isp in vacuum, with the timing dynamically chosen to ensure simultaneous depletion of fuel and oxidizer. The second stage center engine early cutoff is done to reduce longitudinal (pogo) vibrations rather than to limit acceleration; this was instituted starting with the Apollo 10 flight.

The third stage doesn't use all its fuel in this portion of the mission; most of the fuel load is for the later lunar injection burn, and that's why its acceleration curve is so flat in comparison to the others.

Mercury-Atlas missions were more dramatic: 1.35g off the pad, peaking around 7g just before the booster engines shut down and dropped away, climbing again to almost 8g before the sustainer ran out of fuel. 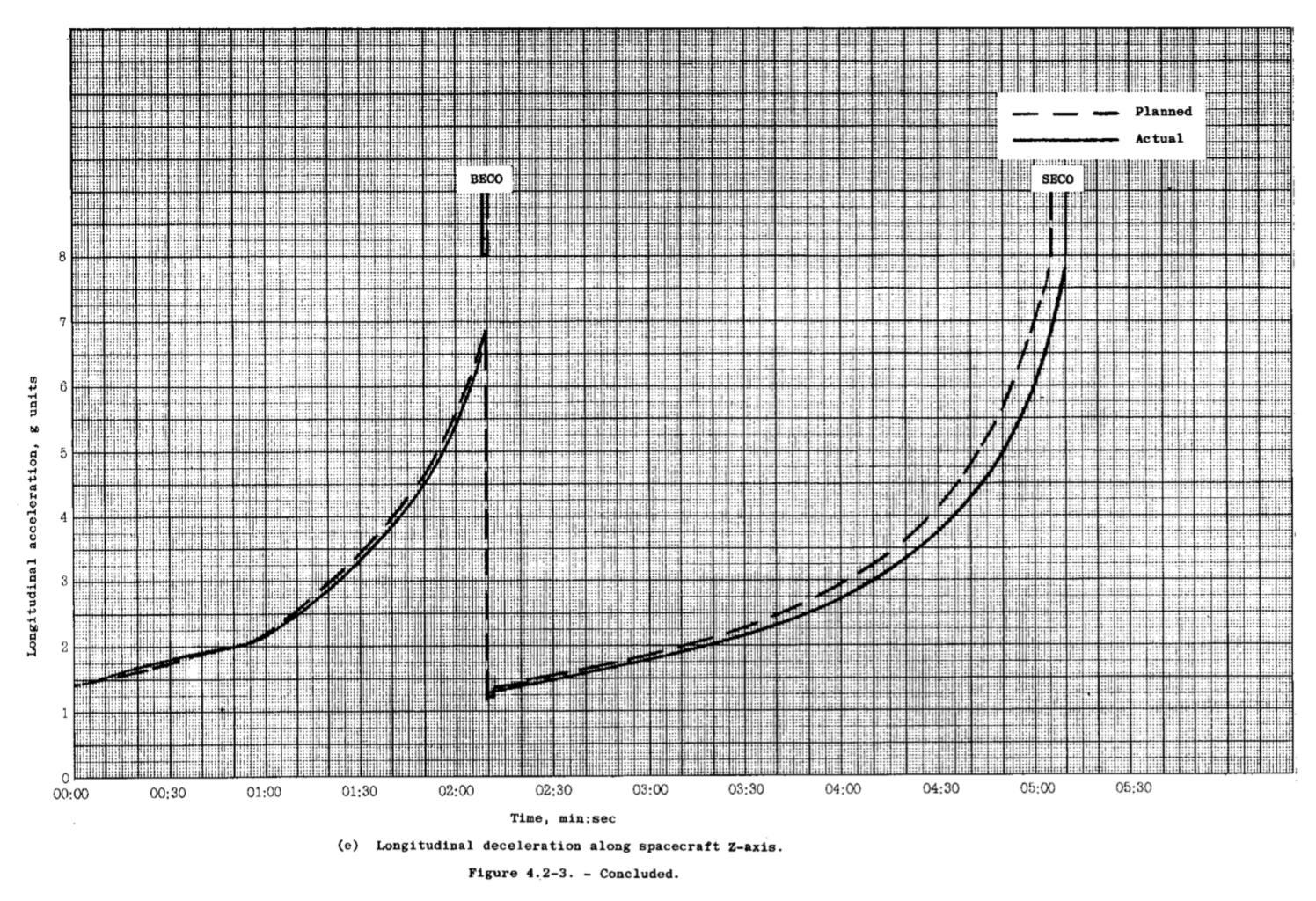 Gemini-Titan peaked above 7g on the second stage. Here's a plot from the Gemini VIII mission report: 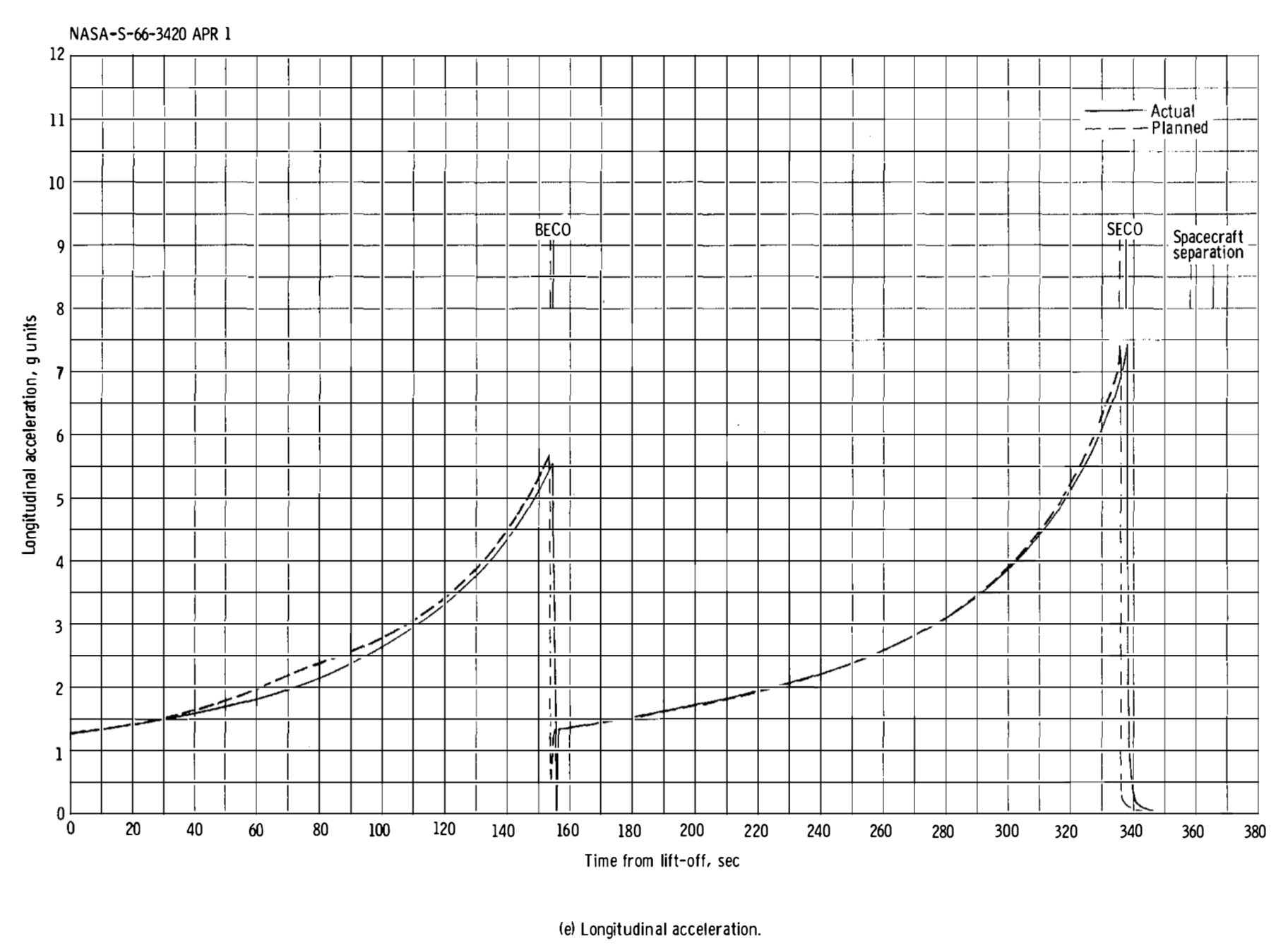 Both Atlas and Titan were designed as ICBMs, so not really optimized for human comfort.

The Space Shuttle was much more gentle in comparison; at solid booster burnout it reached the first peak of 2.5g, briefly falling a bit below 1g then slowly picked back up to 3g on the main engines; the mains were repeatedly throttled down to hold about 3g for a little over a minute.

I think Soyuz does under 4g on launch.

Other things being equal, a higher-g launch can be more fuel efficient, because less energy is lost to gravity by getting to orbit more quickly, and gravity losses normally dominate over drag losses. Keeping STS down to 3g was a challenging design goal - it's hard to build deep throttling capability into an engine, but the shuttle was designed to carry relatively fragile payloads. Soyuz is a bit of a compromise there.

Falcon 9 starts at about 1.15g, and depending on payload would have a first-stage peak acceleration of around 4.5g, but it appears to throttle its engines back toward the end of the first-stage burn to maintain closer to 3.5g.

Again, Soyuz does about 4g here, I think.

There may be a pretty good jolt at touchdown/splashdown, too. Some of the Apollos hit rising waves at the end of the ride for very brief 15g bump.

STS and Soyuz g-forces are necessarily low, again, because they carry civilian crews. In the case of the shuttle, again, it's a major design consideration: the gentle re-entry means the ship has to deal with a prolonged period of high thermal load, which requires fancy and vulnerable ceramic tiles rather than a simple ablative heat shield.

To answer your second question on the astronauts' experience and how much thought went into adjusting the g-force profile of a launch, NASA published a document that contains information on the g-force survivability range of a human.

Here is the Paper, the relevant figure you want is Figure 5 which is about halfway down the page. The figure is a plot of g-forces in the y axis and time in the x axis with highlighted regions of survivability.

9
How much throttleback to keep acceleration under 3g?
18
Which crewed spacecraft provides the gentlest descent and/or landing?
17
Did the Apollo astronauts ever describe reentry deceleration?
13
Do payloads with living creatures get launched slower to minimize G forces?
7
What is BECO? (Gemini) Same as MECO?
4
Would there be any advantages for a rocket with two "half stages"?
6
Theoretical Max G forces on Shuttle Launch?
3
When were Shuttle crew absolutely required to have their seat belts fastened and their tray tables in their full upright position?
3
How throttle changes affect calculations of thrust?
2
How much less fuel do rockets burn with higher G force?
See more linked questions

10
What was the first attempt in history for space exploration?
7
Apollo/Shuttle launch site fuel handling
3
how long does it take to have an emergency crewed space launch?
32
Why was this Saturn rocket elevated for launch?
15
Why are launch escape towers jettisoned early?
4
Calculating Apollo launch azimuth
6
Can a VASIMR Plasma engine be used to launch a rocket?
4
Did the Apollo Command module really "skip" within, or off of the atmosphere as a part of its reentry program?