Why has no lander or rover visited Hellas Planitia on Mars?

While with this weeks discovery, I am sure everyone is waiting for the inevitable trip to Palantir Crater, I noticed that one Mars' largest crater, Hellax Planitia has never been visited by a lander or rover. I am curious is as to why this is the case.

Is the crater too rough to land on or otherwise too dangerous for a probe? Is there just nothing of interest in that crater? I mean it is also likely that water covered this point on Mars as well, but most of the probes seem centered on the Borealis basin or its edges. It's one of the deepest points on the Martian surface and possibly the largest crater. I am just curious why scientists are not more interested in this area of Mars.

A map of where landers have landed on Mars and the proposed InSight landing site: 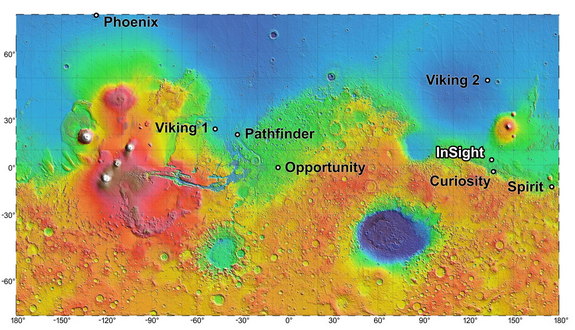 Hellas basin is certainly an interesting region, and several landing site selection processes evaluated candidate sites in it, mostly in the Northernmost region that's above the 30° South circle of latitude:

Out of some most interesting aspects of it are estimates of large water ice deposits beneath its relatively thick layer of surface regolith in the East, higher surface atmospheric pressure simply because of being so deep and in some Western spots over 8 km below Mars standard datum, large, delta-like alluvial fans spreading into the North of the basin, has generally fairly diverse surface features and is of course large, covering near-equatorial to near-polar latitudes.

All of these are also its drawbacks; Sites of areologic interest are far apart, its seasonally induced micro-climate conditions are rough and pronounced due to somewhat larger surface atmospheric pressure, winds are stronger, dust storms longer lasting, it experiences higher seasonal and diurnal surface temperature variations, shorter days and exposure to sunlight during Southern hemisphere winters, and as a deep impact basin, terrain is fairly rugged, inclined, and often covered with deep pockets of sand.

So in short, any candidate landing sites in the Hellas basin have so far been voted out by better suitability of other - with exceptions being Phoenix Lander and Mars Polar Lander that went rogue - mostly more temperate latitude landing sites that offer better thermals and solar power year long. Hellas doesn't lack scientific interest, but it comes somewhat short on safety and mission success estimates.

For the Mars 2020 Rover Mission, the two Hellas candidate sites, Hadriacus Palus (blue dot #101) and Circum-Hellas Hydrothemal (blue dot, unlabeled) were ranked #16 and #19 respectively out of 27 sites evaluated after the first landing site workshop, failing to qualify among top 10 sites evaluated during the 2nd Landing Site Workshop for the 2020 Mars Rover mission.

Also NASA's InSight lander will target a site at Elysium Planitia even if they fallback to any of the other three landing sites after final evaluation, ESA's Schiaparelli EDL demonstrator module will target a site at Meridiani Planum (like MER-B Opportunity) at 2016, and also ESA's ExoMars 2018 Rover will target either Mawrth Vallis, Oxia Planum, Aram Dorsum, or Hypanis Vallis. Which exactly will be the two final sites (main and backup) will be decided during the 3rd ExoMars 2018 Landing Site Selection Workshop on 20th to 21st October, 2015: 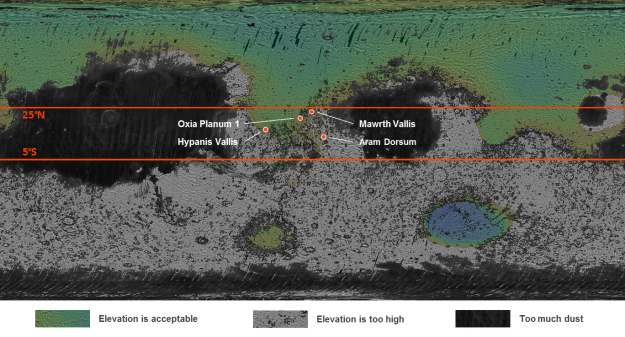 Four possible landing sites that are being considered for the ExoMars 2018 mission. Source and more info: ESA

Update (Oct. 24, 2015): ESA has selected Oxia Planum as the primary candidate site for ExoMars Rover that is scheduled to launch in May 2018 and land on Mars in January 2019. Oxia Planum has presumably iron-magnesium rich clays, which are a strong evidence of past water activity and may have helped preserve biosignatures of past life.

I want to add a bit of commentary at this point, realizing that my answer probably doesn't seem too inspiring; Most of these landing site constraints make Hellas, so far at least, a weak spot for largely autonomous robotic missions. It doesn't really disqualify it for future advanced robotic and human exploration missions though, albeit lack of more intimate knowledge of the region might prove rather challenging at first. I expect the interest for it to gradually increase as the time for first human missions to the Martian surface approaches.

Higher surface atmospheric pressure, according to rather promising preliminary RAD experiment measurement results on MSL, shows potential for further reduced exposure to radiation, very likely large and relatively easily accessible water ice deposits could be utilized to produce potable water, breathable air, propellants for return journey,... sediments under some of the alluvial fans and gullies show potential for clay deposits which, if true, would certainly be a good target to look for signs of past and present life, and having the landing site deep below the standard datum with more of and slightly denser atmosphere means that you get to land a bit heavier payloads at the same cost to the mission, too. And if the subsequent launch site isn't too far South, you don't lose too much of the delta-v boost by the planet's rotation either. So there is certainly the potential for even more interest in Hellas in the, oh, not-too-distant-future (fingers crossed).

Not the answer you're looking for? Browse other questions tagged mars probe planetary-science mission-design lander or ask your own question.

6
Where will NASA's InSight land on Mars?
2
Have we looked in the right place for life on Mars?

9
What factors are considered when choosing a Mars lander landing site?
8
Could the crashed Mars Express lander be imaged by the MRO orbiter?
2
Next lander/rover mission
3
Why a donut-shaped balloon decelerator in the Aldrin-Purdue proposed Mars lander descent?
4
Has a lander/rover ever examined or photographed another mission?
4
How many solar system bodies have had coherent radio transponders?
4
How are martian dust devil maps made?
3
Rover vs pathfinder vs lander?