Were all three Mobile Launch Platforms ever in use simultaneously?

With an optimistic view on the future, NASA built a Vertical Assembly Building with four bays and three Mobile Launch Platforms. They were later repurposed for the Space Shuttle and other launch vehicles.

Were the there MLPs ever all three in use simultaneously:

"In use" can mean for example two in the VAB for vehicle assembly and one on the launch pad, but all three should have (part of) a launch vehicle attached to it.

In August 1990, there were three shuttle stacks at least partially assembled on their MLPs at the same time: Columbia for STS-35, Atlantis for STS-38 and Discovery for STS-41. The picture in this forum thread on NasaSpaceflight shows Columbia and Atlantis, as Discovery was in the VAB at the time. 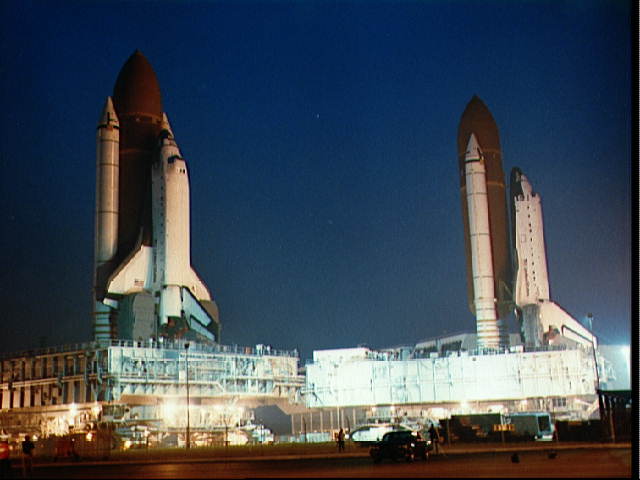 During the Apollo program, the Saturn vehicle was stacked on the mobile launcher platform. Thus, a platform was in use starting from the stacking of the S-1C stage. This table provides a detailed timeline for each Saturn V launch vehicle and the platform used:

*) At time of stacking start.

Apollo 5 and 7 were Saturn 1B launches that did not use a MLP.

There were two periods were all three platforms were in use with at least part of a launch vehicle on it:

**) The platforms were not continuously in use, for example:

Somewhere after 16 July 1969 (Apollo 11 launch) but before the start of stacking of Skylab 2, ML1 was being modified for the Saturn 1B (addition of the milk stool) and out of rotation, but I don't consider that being "in use" in the context of the question.

Not the answer you're looking for? Browse other questions tagged apollo-program space-shuttle history saturn-v launchpad or ask your own question.

20
What are the most-delayed missions that eventually launched successfully?
9
Why did the Vertical/Vehicle Assembly Building have four doors?

12
Do any of the developing space programs use horizontal launcher assembly and launchpad loading?
17
NASA Launch Control: was all of its capacity ever used?
19
Was LC39A built with a rocket much larger than the Saturn V in mind?
5
Ground personnel proximity to space shuttle at launch?
9
Why did the Vertical/Vehicle Assembly Building have four doors?
11
Why would someone need vertical loading for a SpaceX rocket?
28
How did they access the LM to mount the flag package while the Apollo stack was already on the launch pad?
2
Were photographs or optical measurements of orbital craft from the ground ever used during early crewed spaceflight missions?
0
Why were the three 122-cm diameter conductive spheres for charge collection in the Shuttle's Space Experiments with Particle Accelerators black?
2
Evolution of Saturn V for JFK's Man on Moon mission