I know that ISS, being in low Earth orbit, requires regular boosts. But I can't seem to find information on how often does this happen. Is it done during each resupply mission, only during some of them, or are there missions which sole purpose is to boost the station's orbit (doesn't seem likely, but what do I know)? Are the boosts large, or small and periodical? How much does the orbital altitude oscillate over time. I don't mean between apsides; let's say how does the apogee oscillate?

The easiest to see ISS orbital reboosts is by checking Height of the ISS (where with height they mean orbital altitude above mean sea-level) over at Heavens Above. For example, for the last year, this is the graph:

This plot shows the orbital height of the ISS over the last year. Clearly visible are the re-boosts which suddenly increase the height, and the gradual decay in between. The height is averaged over one orbit, and the gradual decrease is caused by atmospheric drag. As can be seen from the plot, the rate of descent is not constant and this variation is caused by changes in the density of the tenuous outer atmosphere due mainly to solar activity. (Source and credit: Heavens Above)

As you can see, reboosts (sudden peaks in altitude on graphs) are done on average about once per month, but there can be many consecutive months during which no adjustment in orbital altitude to the station is done. Which is nowadays done either by visiting Progress resupply vehicles, or the station's thrusters on Zarya and Zvezda orbital modules by using propellants delivered to the station by resupply vehicles.

ISS mean orbital altitude is however now higher than it used to be during the Space Shuttle visits when it was still being assembled, for easier access of the Space Shuttles and to increase their total payload to orbit capacity. Since assembly complete in 2011, and retirement of the Space Shuttle fleet, its orbit has been raised from about 355 km to now roughly 415 km (average): 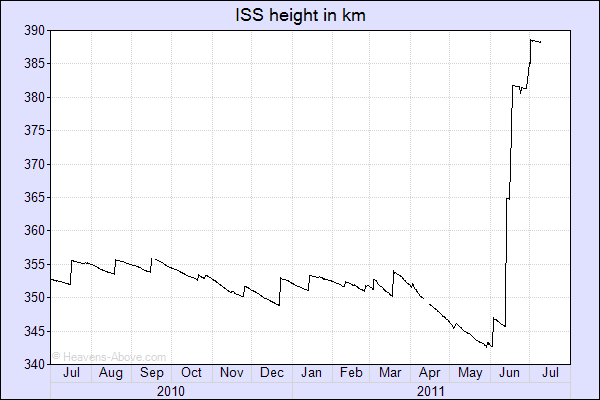 Previously, orbital reboosts were also done to adjust station's phase angle so its orbit was accessible to the Space Shuttle fleet during convenient local times more often, but now these phase angle reboosts seem to be rarer but still performed for some visiting vehicle orbit rendezvous.

For more info on each specific reboost, refer to the ISS On-Orbit Status Report. Last reboost (on date of writing this answer) was performed on May 6 by Progress M-26M, despite the loss of Progress M-27M vehicle:

ISS Reboost: This morning, the ISS performed a reboost using 58P thrusters to set up phasing requirements for 41S landing scheduled on May 13. Burn duration was 12 minutes, 17 seconds with a Delta-V of 1.34 meters/second.

During Space Shuttle years, small reboosts were also performed by the Shuttle Orbiters (according to Wikipedia, they had 232 kg of fuel available for that), and in recent years also by the ATV resupply vehicles, with the last of the five of them undocked from the station in February, 2015. Last ATV reboost was done by this Georges Lemaître ATV-5 on August 10, 2014. In the future, the station might also receive a testing version of VASIMR thruster that could perform such reboosts more efficiently in terms of reaction mass consumption.

26
How exactly will the ISS die in 2025?
19
How does a Spacecraft change its orbit?
8
Is there a change in altitude when "falling around earth"?
23
How long would ISS stay in orbit if it didn't get reboosts?
15
Where can I find data for Atmospheric density vs. altitude?
19
Does the orbit of the ISS decay?
13
How was the Space Shuttle Orbiter used for ISS Reboost?
11
What is the orbital boost acceleration of the ISS?
10
How hard does atmospheric drag push on the ISS? Is it more than one pound?
6
What orbit would a space station need to stay in orbit for N years?
See more linked questions

12
Could Earth-lunar flybys be repeated consecutively without the use of propellant?
19
How often does the ISS orbit align with the day/night terminator?
14
Artificial Shooting Stars - how could this possibly work (economically/technologically)?
9
Navigating in space with only cameras
4
Has a TLE ever been issued for a spacecraft trajectory not bound to Earth orbit?
12
Can the Right Ascension and Argument of Perigee of a spacecraft's orbit keep varying by themselves with time?
5
Does the ISS yaw in orbit? And if so, why?
13
How was the Space Shuttle Orbiter used for ISS Reboost?
10
How hard does atmospheric drag push on the ISS? Is it more than one pound?