Were the Apollo lunar activities observed from Earth?

I understand that all manned landings on the Moon were on the near side, so technically they could be visible from Earth.

Was it possible to observe landings and/or extravehicular activities (EVAs) with Earth-based telescopes? If not, why?

Was it possible to observe landings and/or extravehicular activities (EVAs) with Earth-based telescopes?

Short answer: Not possible in 1969

In 1969, we had not the faintest possibility to see a man on the Moon from Earth. The angular resolution of the existing telescopes was by far insufficient to see an object the size of the LM.

Light diffraction and the Airy pattern associated with optical instruments prevent us to see smallest details even if we can "zoom" at the required level. To overcome this limit, the size of the aperture (mirror) must be increased. So knowing the visibility threshold just requires knowing the size of the telescope apertures.

In 1969 the Hale telescope of the Palomar observatory was the largest available. With its 5m mirror it couldn't resolve details smaller than five times the LM height. (See how the limit is determined at the end of the answer).

But what size are we talking about exactly?

Angular size of the LM

When looking at objects, the actual linear size itself is not a meaningful information. What counts is their apparent size which depends on the actual size and the distance. This apparent size is expressed as an arc length: The angular size. In astronomy, the arc is often expressed in milliarcsecond (mas).

Seen from Earth surface, the Moon lander has the same "apparent height" than a fly at the distance of the ISS: 5.4 mas. Seeing the LM on the Moon requires the capability to see a fly at 400 km, which is not an easy task.

The 5m-Hale telescope of Palomar observatory had a theoretical resolution of 25 mas, far from the 5.4 mas that would have been required to see the LM. Whatever the power of the telescope, a group of 5 rows of 5 LM would have been seen as a blurry dot.

Barely better today, no improvement expected in the short term

The first system which will be able to achieve 5 mas alone will be the European Extremely Large Telescope (E-ELT) planned for 2025 (site). Used with the Harmoni imager, the resolution should be 4 mas per spaxel. So a single pixel LM. Other optical telescopes under construction: 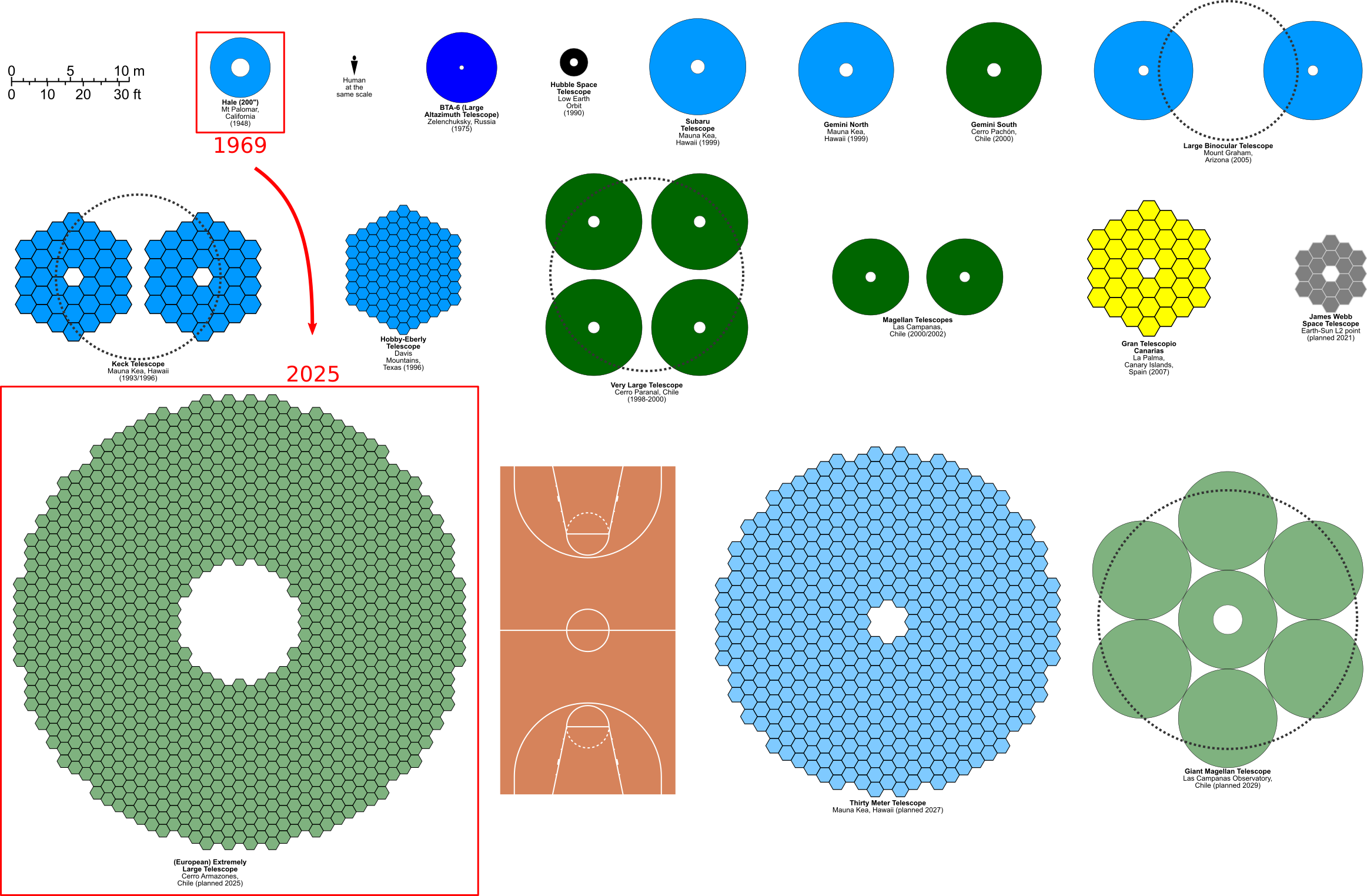 Comparison of existing and planned telescope sizes, adapted from original by Cmglee on Wikipedia

A 40m mirror (E-ELT) is probably close to the maximum reasonable to build, and further developments actually follow the interferometer solution combining two or more instruments to get a resolution better than the one of the individual instruments.

Images from distant telescopes are merged in a correlator. From a resolution standpoint, such assembly works as if there was a single mirror of the diameter equal to the distance between mirrors, regardless of the actual size of the mirrors (but the luminosity still depends on the actual size). The technique is also known as a synthetic aperture, a designation first found in the radar domain.

The different light beams from each source must be correlated into a single image, which means their trip from the different sources (which would be e.g. 100 m long) must be maintained constant with a precision of several nanometers, a very tough task as distance is increased.

Today's most advanced fixed optical telescope is the VLT made of 8 instruments (4 unit telescopes and 4 auxiliary telescopes) which can be coupled. From ESO site:

When two or more telescopes are combined in interferometric mode, the spatial resolution is determined by the maximum distance between them. The VLTI, operating with two 8.2-metre Unit Telescopes, reaches a spatial resolution equivalent to a single 130-metre giant telescope, which is about 2 milliarcseconds. This is equivalent to distinguishing two points separated by the size of a sesame seed on the International Space Station as seen from the ground.

There is no better solution expected in the short term. Longer baseline interferometry is needed, but as we mentioned there are great challenges to overcome for maintaining the distance in the correlator.

In 2020 we can resolve details down to a couple of mas. This means the 5 mas LM would appear as a 3x3 pixel image.

Will it be ever possible to look at the landing site from Earth?

To get a 50x50 pixel image of the LM, we need to increase the resolution and reach 100 µas in the visible spectrum. This requires a technology equivalent to a telescope with a mirror diameter of at least 1km, likely an interferometer with a 1km baseline.

Optical interferometers with kilometric baselines on the ground may be feasible, but not in the short term, though some variants, like the Cherenkov Telescope Array, are promising.

One last possibility: Being able to undo diffraction as it seems possible to undo light scattering. In that case, no need to build large instruments.

Why is there a resolution limit in the first place?

When light rays from a very remote light source are focused by an optical instrument after passing through an aperture (pupil), and the mirror/lens is far enough from the aperture (far field) contrary to what is expected by geometric optic approximation, light is not condensed into a single point but into a small spot with rings around. Most of the light (83.8%) is concentrated in the central spot. This pattern is due to Fraunhofer refraction by the edge of the aperture, and subsequent interference between the direct wave and the refracted wave:

Refraction spot and rings due to Fraunhofer refraction

The angle of refraction can take any value between zero and a maximum depending on the wavelength and the aperture size: $$\sin \theta \lt 1.22 \frac {\lambda}{2a}$$.

So the greater the aperture, the smaller the cone where the diffracted rays can be found. The distribution of the light after diffraction is called the Airy pattern after the name of the person who studied it. This is not a continuous spot because fringes are created due to the rays traveling along different distances (so the phase at the focal point is also different).

A consequence is we can never, even with a perfect instrument, focus a light point into a single point, the central spot is the best we can have and we need to deal with it. Another consequence is if two light sources are observed within the same aperture, the Airy patterns will interfere and create artifacts. These pictures extracted from this video show how: 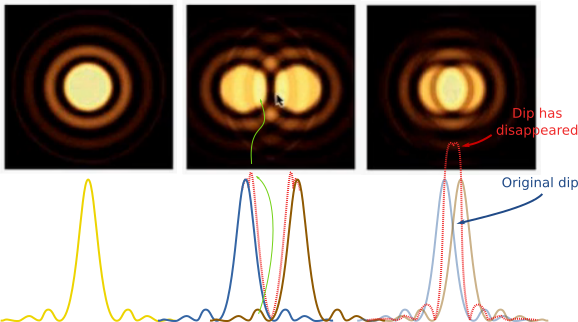 On the left there is a single light source, below is the corresponding intensity graph where the rings are visible.

The middle image show a case with two light sources close enough, actually at an angular distance equal to the angular resolution of the optical instrument (maybe a telescope or a camera or an eye, it doesn't matter). Instead of having two superimposed images of spots and rings, some high and low intensity areas have appeared.

Because the intensity curves actually represent light waves that are not in phase, some portions of the curves add, some subtract, this is the principle of interferences. The result is shown in the red dotted line.

On the right the sources are moved closer than the resolution limit, interferences are more visible and completely change the picture. There is a bright area at the center, where intensities have added, and around darker areas where they are subtracted. These darker rings don't correspond to something real in the sources.

These interferences now prevent to distinguish the two sources which are blurred into this visual artifact created by diffraction at the entrance of the instrument. We mostly see the central bright area.

Interferences create the Airy rings, which in turn hide the details, but by increasing the aperture size, the ring area is reduced and more details are preserved.

This is the very reason high resolution telescopes have a large diameter. This is true for any optical instrument and small binoculars or camera with small photographic lens (smartphones) can't have a high resolution whatever their magnification/zoom capability.

Practical determination of the resolution

As several nations' governments and plenty of amateurs pointed radio frequency antennas at the sites and received signals, one might conclude that they were observed. Observation does not have to imply visible light observation. See this http://www.arrl.org/eavesdropping-on-apollo-11 My recollection from the time is that plenty of amateurs tuned in to the transmissions coming from the moon.

No they were not. Telescopes, even today cannot resolve that small a detail from the distance. LCROSS, orbiting the moon was able to barely resolve the lunar modules left behind.

More good details in this similar question and answer on the Astronomy site: Visibility of the Apollo-11 Module

There were several observations made, in radar and in visible, but none from when the spacecraft were on or near the surface of the Moon itself. Communication could be heard by third party observers, but they were far too small to actually be seen. However, it is much easier to see an object when it doesn't have a cluttered background, even if small. A summary of some of the observations by telescopes from Earth include:

Not the answer you're looking for? Browse other questions tagged apollo-program lunar-landing telescope observation or ask your own question.

3
Can we see the USA flag on the Moon from Earth?
11
Picture of equipment left on the Moon?
-2
How come we can see nearby galaxies but are unable to see TRAPPIST-1?
4
Observing a lunar lander by telescope
2
When will a moon landing site be visible via telescope?

9
Can multiple space telescopes be grouped together to explore the space
26
How was dust-mitigation addressed during the Apollo program?
13
What were the differences on the LM ascent stage engines on Apollo 9, 10, and 11?
6
Why such a large observed doppler shift from Apollo 17 orbiting the moon?
20
Could Hubble observe the night side of the Moon?
2
Why is there no image of the Earth taken from the lunar surface during Apollo 12,15 and 16?
12
Why did a solar eclipse of the sun as seen from Apollo 11 appear to have an elliptical corona?